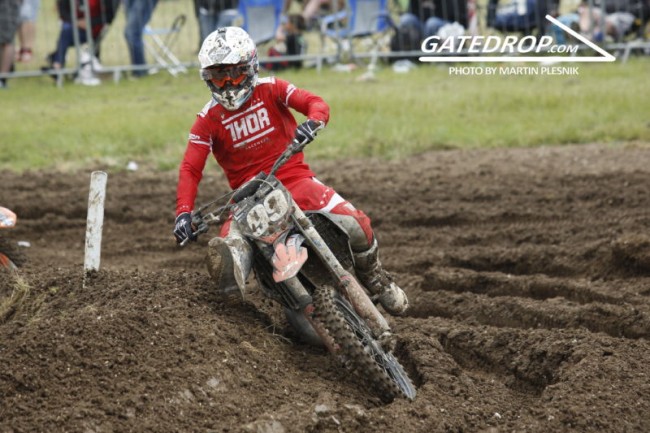 One rider who hasn’t had it easy the last few years is Szymon Staszkiewicz. Szymon who comes from Poland has suffered from lots of injuries in the last two years and it hasn’t been easy for him. However, Szymon has made a return to racing during the 2016 season and is competing in the EMX125 championship as a privateer.

The season started well for the Polish rider as he finished up in sixth overall at Latvia, Kegums. He also matched that result at the last round of the series in Mantova which equalled his best result so far this year.

It’s not easy coming all the way from Poland at such a young age and being a privateer but Szymon is having a good season. He is one of the top privateers in the class and currently sits twelfth in the championship. He will be looking to improve on that before the end of the season and with Lommel coming up don’t be too surprised to see him putting in a good result.

We decided to sit down with Szymon to talk about a tough few years and his return to racing in the 2016 season.

Gatedrop: A great weekend for you in Mantova, you must be happy with sixth overall which equals your best round of the season..

Szymon Staszkiewicz: Yes, I liked the track and I was feeling good on it throughout the weekend.

Gatedrop: In the first moto you crashed and were down in eighteenth, you must have been happy with your speed to get back up to sixth?

Szymon Staszkiewicz: I started in about eleventh place, then went into eighth and on the third lap I crashed with another rider, that cost me many places. I got up as fast as I could and tried to score the best finish as possible and on the last lap i passed to get into sixth. Without the crash maybe it could be better, but I am still very happy about the result.

Gatedrop: The last few years you have been injured, can you talk me through your injuries for people that don’t know about your background?

Szymon Staszkiewicz: It all started in October 2013 when I broke my foot in several places because my bike’s engine suddenly stopped on 30m leap. I had two operations at the beginning, because the first one wasn’t successful. I started riding in March 2014 and while training in Lommel I had a hard crash. My foot was swollen and hurting for few days, but when the pain stopped I started riding again. After some time I had to go on control with my foot to the doctor to check if everything is alright. On X-Ray it was visible that I broke titanium plates teaming bones. After this information I knew that the season is over for me, because I had to have a third surgery in May. In September I started again with some training.

Everything was going good until December, when i started having pain in my back. I visited few doctors and not one of them knew what is wrong. When my back stopped hurting I tried to ride again. I started in some Dutch Championship at the beginning, but then the pain came back, so i visited another doctor. The reason why I had that pain was that two spinal discs were pulling out. I had to take a break until September again to cure my back to be 100%. I went on a race on 11.11 when it’s Poland’s independence day. During training I had a crash on a jump and I hurt my shoulder. I took some painkillers and won in “MX2 Junior” class. The pain wasn’t gone for a few days, so I went on X-Ray check and I had a crack in my shoulder. I had to take a break again until late December. Since that month I am riding again. I hope that bad luck will leave me for a little bit longer this time (laughs).

Gatedrop: You are from Poland, how hard is it coming from Poland just to be at the races?

Szymon Staszkiewicz: Thanks to our friends Anja and Joep (parents of Raivo Dankers) we are able to leave our bus, bikes and service with them at the place they live and this makes travelling for us much easier. We are very thankful for it. From home I travel by an air plane what is shorter, cheaper and more safe than going by car.

Gatedrop: Also, it must be pretty hard being a privateer, especially against guys on Factory bikes?

Szymon Staszkiewicz: In Poland motocross is not a very popular sport and it is difficult to find any sponsors especially, when I am not able to ride in Poland because some races are on the same weekends as EMX this year. 99% of the time my parents pay for my starts. For sure it would be much easier if I were able to ride in some team, but I am not and I have to deal with it.

Gatedrop:  I believe you are still at school, could you tell me a little bit about that and what you study? Is it tough focusing on school and racing?

Szymon Staszkiewicz: I am in class that is focusing the most on English and History, but still other subjects are important. This year was the first one for me in a new school, but it is already pretty tough. Straight from school my dad was picking me up and we were going to training. Sometimes there were days when I was coming home about 8-9pm and then i had to do homework and study for exams until 1-2am because school is a very important thing in life. Unfortunately, after holiday, in second class there will be a lot more to study than last year for sure.

Gatedrop: You race the Dutch Championship and you seem to do better in sand even though there’s a lot of hard pack in Poland, does that championship help you with the sand riding?

Szymon Staszkiewicz: Yes, I ride in The Netherlands every year. I know many people there and the atmosphere in Paddock is very nice. I don’t focus on Polish competitions that much, because some of them are already at the same time as EMX, so I take it more easy when I go on Polish Championship. It is like a training for me. In Poland there are some hard packs, but in general they are never prepared so I often go on sand to train.

Gatedrop: You have also competed in the ADAC championship; how would you compare that championship to the Dutch championship and what series do you prefer?

Szymon Staszkiewicz:  I rode an ADAC in Aichwald. It was the first time for me since 2012. There was a lot of mud and rain so there was only one race that was red-flagged after 15 minutes I think. I was riding 14th but after 4 crashes I finished in 20th place. I think the level on ADAC Youngster Cup is something between EMX125 and EMX250 when you look at the riders names. It is really hard to compare those competitions. In the Netherlands most of the tracks are sandy and in Germany they are hard packs. On both series they are nice, good prepared tracks and I think it is good to race them both.

Gatedrop: Coming into the season what were your expectations for the season and have you been able to achieve them?

Szymon Staszkiewicz:  Honestly, before first EMX I didn’t know what to expect after almost two years without racing. The goal was to finish about 10th place. After the first race I saw that I am able to fight for some good points in these races. Currently I am pretty close to achieve the goal and I hope I will do it.

Gatedrop: The Junior World Championships takes place in Russia later in the year, will you compete at that event?

Szymon Staszkiewicz: I would like to go there, but I am a privateer. My parents are sponsoring me and I am really thankful for it, but to go there I would have to go by car about 6000 kilometres through Belarus and Russia and it is already too much for us this year.

Szymon Staszkiewicz: I will switch to 250 for sure. I am already training on a 250 in Poland and I ride on the 250 at the ADACs. Next year I would like to start in the Dutch Masters of Motocross, ADAC MX Masters and EMX250 if it will be possible

Szymon would like to take this opportunity to say a big thank you to the people that help him. A big “Thank You” to Anja, Joep and Raivo for their help during all those years, to Toon van der Ven for perfect suspension and to Stefan Geurts van Kessel for a great engine.