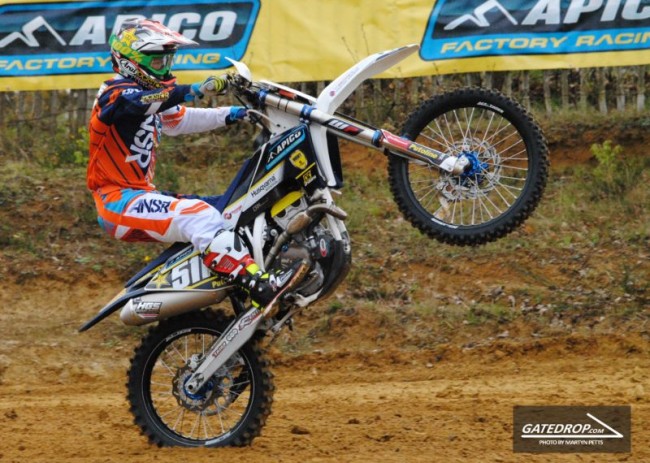 Steven Clarke has started his season with a bang on his Apico Husqvarna. After two rounds of the British Championship, Steven nicknamed ‘Scuba’ is leading the championship and will take the red plate to round three of the series.

Steven has rode a lot of championships in a lot of different countries throughout the years including America, Australia, Germany but now looks to be settled in the UK and competing the British championship.

We decided to sit down with Steven to have a chat about his career and the season so far.

Gatedrop: Barr was putting the pressure on at the end of the second moto at Canada Heights, were you confident that you could hold him off?

Steven Clarke: Yeah, I mean I rode four or five hard laps at the beginning to push away then rode at about 75% for the rest as I knew Martin was fast and definitely fit so at the end if I had made a mistake I would have more than enough in the tank to mount a challenge.

Gatedrop: The title is wide open this year, how confident are you that you can win the series now after the win? Who do you think your biggest competitor will be?

Steven Clarke: Well, I have always had the speed to win, I know that. But I lacked a little bit of consistency and fitness in the previous years. This year I have really knuckled down and done my homework pre season. I know I’ve got as much of a chance to win as all the other guys. It’s too early to think about the title yet as we have got a lot of racing ahead of us, I’m just taking it race by race and having fun along the way!

Gatedrop: What was the decision to stay in the MX2 class for 2016 instead of moving up?

Steven Clarke: It was an easy decision to stay down because I wanted to have a good go at winning the title etc as last year I had a crazy year with bikes getting stolen and stuff.  It really takes the wind out of your stride and took a while to bounce back and when I put in the results I did at the end of last year, I knew barring injury I’d be a front runner for 2016

Gatedrop: You have been with a lot of teams during your career. With Apico Husqvarna have you found a team were you see your future?

Steven Clarke: I have indeed, my father, my mechanic Stu summers, his father Andy summers and myself set this team up at the beginning of last year after failing to get an offer from anyone even as the reigning emx250 champion. We searched around for some sponsors at first but we got a call from Dylan at Apico who had seen potential in me and was willing to be the title sponsor. I’ve worked with Dylan and the guys at Apico on previous years but not on this scale but let me tell you, the guy has got a heart of gold and a real passion for motocross! Even all the staff there including Scott who loves a pork pie (laughs). Along with all our other sponsors we have got a solid team and now signing Bry Mac as the other member in our pro decision. Allso jack Lindsay and Alexander brown both setting fire in the youth ranks, we are a complete all around package that shows you don’t need a big awning to be at the front, two sprinters and some easy ups will do the job just fine

Gatedrop: Your father seems very involved in the team, can you explain his role? It must be nice having him work with you?

Steven Clarke: We call him the overseer.  His role is unclear, he likes to dabble in all of it. One minute he’s chasing sponsors, the next he’s ordering parts, and on to telling me where I need to go faster, also telling Stu the bikes can be quicker (laughs).  My dad is the best there is, multi talented man who won’t take s**t from nobody but tells it how it is at the same time. He is the main reason we have been able to pull a team together out of thin air and I cannot thank him enough above everyone for always backing me in this tough sport.

Gatedrop: You have rode a lot of championships in your career. You seem content racing the British championship right now, do you see your future in this series?

Steven Clarke: If I’m honest, the future isn’t in my plans at the minute, I leave for the moment and I’ll worry about the future when it knocks on my door. For now, I’m loving it being at home with family and friends and riding for my own team with good people all around. I’d like to return to USA at some point in my future as I have unfinished business there, I’d like to get on the podium at a SX one day to top off my career. But like I said, I’m focusing on right now and having in giving it my all with a huge cheesy smile on my face!

Gatedrop: Last year at Valkenswaard the team got the bikes stole, how hard was that to deal with?

Steven Clarke: Oh man, words cannot describe the emotions I felt that day. It happened over night so I had already completed qualifying and moto 1, then to wake up Sunday morning for free practice with no bikes my heart sank. At first we thought someone was playing a joke on us but soon realised tyres tracks leading away, padlocks cut and on the floor then a huge hole in the fence leading off into the woods. I had my practice bike in my vito van but FIM would not let me race it as it hadn’t been through technical, being the defending champion and not being able to race was heart breaking as a double season victory was my plan and definitely in our sights. But, we moved on and husqvarna uk hooked us up with some more bikes to borrow for the season and after some time we got money together for race parts etc and bounced back stronger than before almost clenching the final round at fat cats.

Gatedrop: There is a lot of sand on the calendar this year and only one hard pack track, what’s your thoughts on that?

Steven Clarke: My thoughts are I wish it would be at least 50/50 sand to hard pack but being a hard pack favoured rider I wish there were eight rounds at fox hills (laughs). I’ve done plenty of sand riding in my career and also a lot of training in sand this season so I’m prepared to battle it out anyway. Not to mention I clinched the emx title in one of the deepest sand tracks in the world (lommel),  so I’m ready!

Gatedrop: What would you say your biggest achievement in your career has been so far?

Steven Clarke: I’d say my biggest achievement so far isn’t exactly a result from a series or anything but I’d say it’s making it around the world competing most places people dream of and I’ve came out the other side in one piece, a big smile on my face and met some pretty cool people along the way.

Steven Clarke: Like I stated previously, I don’t make plans I just go with the flow. This sport is dangerous, we all know that and we all know the risk that it could all end the next time we ride so I just take it race by race and try to enjoy myself giving zero…ducks? (laughs).