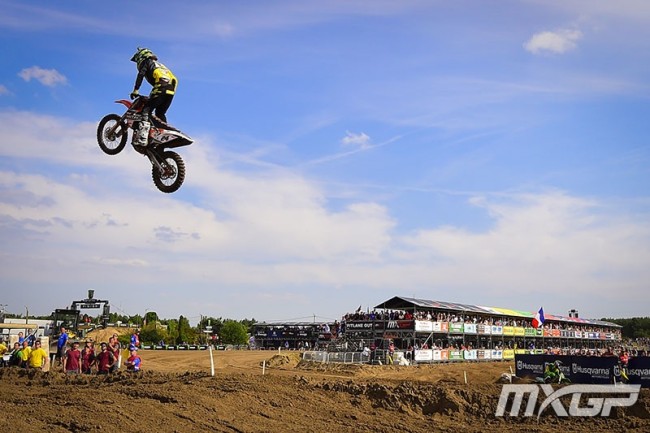 Steve Turner has been looking to bring his already impressive team to the next level for a couple of years and thought 2015 would be the year after signing MXoN winner Steven Frossard. But unfortunately for the team, between Jake Nicholl’s injuries and Frossard’s poor form (he eventually left the team), 2015 turned out to be a disaster on the GP front.

The team’s saving grace was young Adam Sterry who challenged for the EMX2 crown and will now move up to MX2 full-time after some impressive wild card rides this year.

But the key to the team’s 2016 plans is the signing of Shaun Simpson. The Scot finished fourth in the world and Steve knows Simpson’s work ethic, attitude and consistency is exactly what he needs to go to the next level. Simpson will run a factory machine out of the STR awning, immediately giving the team a higher profile and a vote of confidence from the KTM head honcho’s that they can run a top rider under their awning.

We caught up with Steve to talk about signing Shaun and his hopes for Adam Sterry in 2016.

Gatedrop: How long did it take to get a deal sorted with Shaun?

Steve Turner: Not too long. We started talking mid-season and we could both see there was a possibility to put a deal together which would give Shaun a much higher level of support which let’s be honest he bloody well deserves.

Gatedrop: It seems the perfect situation for Shaun next season and your team. A factory bike and rider under your tent but for Shaun he doesn’t have that factory awning pressure.

Steve Turner: Yes that’s the theory behind it. Shaun is a pretty strong character and knows what he needs to get the job done and sometimes the rigidity within the factory teams doesn’t suit him.

Gatedrop: What are your expectations for Shaun and Adam next season?

Steve Turner: Hopefully Shaun can continue his great form and consolidate his top five standing in the world rankings. It would be nice to see him push for podiums and even wins when everything clicks. With Adam i fully expect him to be a top ten guy. He has the style and the speed and the commitment. He just needs to put the races together and he’ll be fine. 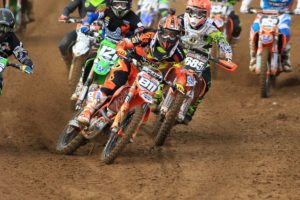 Gatedrop: You had a difficult season in 2015 with injuries and Frossard leaving, how difficult is it to stay positive when that happens after all the effort you put in?

Gatedrop: You have just the two riders for next season what are the reasons behind that?
Cost is definitely a deciding factor but it was more about focusing 100% on the two riders and giving them everything we can to help them achieve their goals.

Gatedrop: With 19 GP rounds next year is it becoming harder to do the British championship…at least with active GP riders?

Steve Turner:There are not many free weekends to recover! No there isn’t, it’s a lot of races for the riders and the mechanics. The riders have to manage their training and recovery throughout the season in order to get through the heavy schedule and they both have programs which will help them achieve this.

Gatedrop: Adam Sterry jumps to MX2 next season, he has progressed a lot with your team, is it satisfying to bring him through and into GP racing?

Steve Turner:Yes it’s really satisfying. The thing with Adam is that he really deserves it. He is a really smart kid and so easy to deal with but he is determined and as his confidence grows he will get faster and faster. Our job is to give him a great bike and support him through thick and thin as he battles his way through his first full GP season.

Gatedrop: Adam seems similar to Shaun, he is a hard worker and improves slightly every year. How much of a help with Shaun’s experience be to Adam next year?

Steve Turner:I’m sure they will get on like a house on fire and I know Adam will learn a lot from Shaun during the season which will only help him to become a better rider.

Gatedrop: Do you know what pre-season races you will do next season?

Steve Turner:As long as everything goes to plan we should be at Hawkstone Park, Valence and Lacapelle, same as last year.

Gatedrop: The world championship is becoming more global than ever with races all over the world. Is that something you support or is it becoming too expensive for private teams?

Steve Turner: It’s one of the most asked questions and there’s pro’s and con’s for making the series more or less global. The one big reason for making it less global is cost and for private teams this is becoming the biggest obstacle to their growth, however It seems to me though that it’s called the World Championship not European Championship and for it to be classed as a true World Championship it should be contested across the World. I think Youthstream and the Factories should look at the private teams who display the right level of infrastructure, presentation and professionalism and put together a dedicated support package specifically focussed on assisting with the increasing costs associated with expanding the Championship’s global reach, otherwise we will end up with just 6-7 factory teams with two riders each.