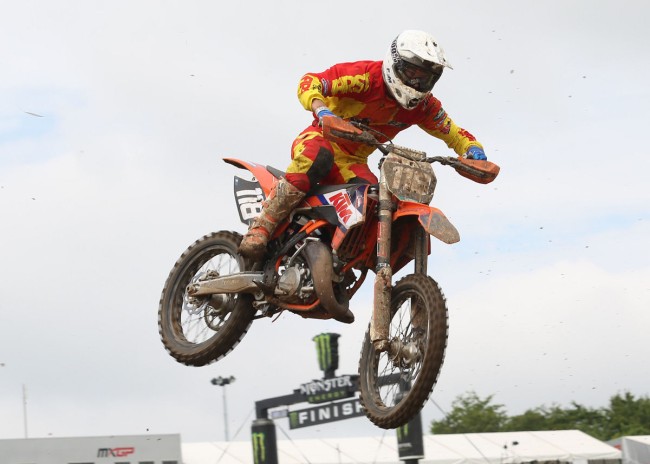 The EMX125 class is stacked with lots of talent coming up through the ranks, there are always a few surprised in that class and this year it looks like Stephen Rubini could the surprise. He went into the season as an unknown rider, unless you are from France.

Stephen has had no European experience before this season so not too many people from outside France had heard of him but he’s showing in the EMX125 class this year that he is a talent. He is riding the championship as a privateer, it’s always good to see a privateer impressing!

He managed to finished fifth and sixth at the first round which was impressive! He didn’t plan to ride all the rounds but as he is doing well in the championship he has decided to do the rest, he is eighth in the championship and missed Valkenswaard. He had his best race so far this season in the UK with two fifth places, he’s getting closer to the podium!

Stephen has been struggling with his starts but has shown sheer speed working his way through the pack time and time again, if he can get a good start the podium or even a moto win is possible! Gatedrop caught up with Stephen to discuss his season so far.

Gatedrop: The first round you finished sixth and fifth, were you surprised you were so fast?

Stephen Rubini: I was surprised by this result and happy with the speed I showed during the weekend.

Gatedrop: Do you think the first round have gave you the confidence to run at the front at the other rounds you rode?

Stephen Rubini: Yes of course it give me confidence! I did not think that I would be in the top five from the beginning of the championship.

Gatedrop: You have also been doing the French Championship, how have those races went for you?

Stephen Rubini: At the three first races it was mixed but the fourth race was really great for me as I finished first and second so got second overall on the day. I think that the 2 first rounds of the EMX125 in Italy and Spain gave me the confidence to do better in the French championship.

Stephen Rubini: At the EMX125 we find the best riders of each counties so the level is already high. In France it’s a little different it is less homogeneous.

Gatedrop: It must be pretty cool riding at the same tracks and same weekend as your heroes such as Cairoli, Nagl, Desalle and RV etc..

Stephen Rubini: First it was awesome to see them in the same paddock and see all the big teams like KTM Redbull Racing , HRC and others … but i’m starting to get used to it now haha!

Gatedrop: You didn’t do Valkenswaard but what’s your speed like in the sand?

Stephen Rubini: haha sand was not my strong point but I was able to do several training in the sand this winter and I made a lot of progress.

Gatedrop: You are a privateer so it must be tough for you to do all the rounds and is that why you haven’t done them all?

Stephen Rubini: Yes the transport, petrol and the journeys in general cost so much money. That’s why I decided not to ride at Valkenswaard.

Gatedrop: I know you didn’t plan to do all the rounds but after seeing how fast you are will you do the rest of the championship?

Stephen Rubini: Yes, the plan was to ride in Italy, Spain and France but my dad and I decided to continue to do the rest of the rounds because I am doing better than we thought.

Gatedrop: Coming into the season what were your expectations for the EMX125 races?

Stephen Rubini: My principal goal was to try to make a top five and I have already done that which I am happy about!

Gatedrop: You have the speed to podium but you are getting bad starts, you must be pretty frustrated by that?

Stephen Rubini: I’m working on my starts because it has became my weakness and I hope that my hard work will pay off and I can start getting better starts.

Gatedrop: Have you got a goal for the rest of the season?

Stephen Rubini: My goals for the rest of the season are to make good starts, finish a round (or several I hope) on the podium and to try and win a race!

Gatedrop: Have you got any plans for next year yet, will you stay in the EMX125 class or move up to the 250?

Stephen Rubini: My age allows me to do another season on 125 but I can also move up to the 250. I don’t know what I will do next year at the moment.

Gatedrop: As it is tough being a privateer you must be looking a team to sign you for next year?

Stephen Rubini: I already have a contract proposal from a team for next year but for now nothing is sure, we will see.