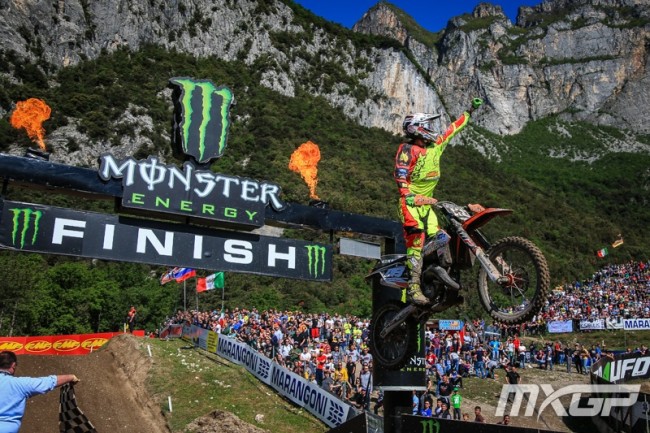 Heading into the 2016 season Stephen Rubini was one of the favourites for the EMX125 title. After a frustrating first moto of the year with a DNF he has bounced back in style.

Italy was great for Stephen and marked his first EMX125 overall win to date showing why Silver Action signed him for this season. The french rider has talent and will challenge for the EMX125 title this year, it remains to be seen if he will be able to take the title.

We sat down with Stephen to discuss his move to Silver Action KTM and his season so far.

Gatedrop: Your first EMX125 overall win, you must be pumped with your weekend!

Stephen Rubini: Hello everyone, yes it was a very tiring weekend. It was good to win and regain confidence in myself.

Gatedrop: Can you talk me through different bikes you have ridden in your career?

Stephen Rubini:  In the 50/65/85 classes I stay on KTM and in the 125 class I ride first on a KTM, i had a good season despite injury. I then had a contract with Yamaha and the team run by Serge GSM Guidetty, it was a very complicated year, I didn’t get the results i wanted. At the end of the year I switched to KTM again and that made me happy, the difference was night and day. Now thanks to the team (Silver Action), I can have a bike that I like and that works the way I want it too.

Gatedrop: Being such a big guy you struggle to get good starts but you got a good start in the second moto, is that an area you have been working on?

Stephen Rubini: It is true that with my size and my weight, I have trouble starting in front. but with my mechanic, all the training is helping and it’s starting to get better.

Gatedrop: What is your goal for this season?

Stephen Rubini: My goal is to win the EMX125 championship.

Gatedrop: Silver Action KTM have signed you for this year, how did the deal come about?

Stephen Rubini: With Vestappen, he put us in contact with the boss Mirko Madashci. Then we had two proposal’s. One was too move to a 250 but I would have had to pay, this was not possible for my family. The second option was to stay in the 125 class and be champion.

Gatedrop: Being with a team, did you change much in the off-season compared to other years?

Stephen Rubini: Yes I changed my method, I went to live in Italy with the team for a few months and I discovered other circuits. I ride with good riders and made progress in my training.

Gatedrop: A lot of guys have moved up to the EMX250 class from last year but there are a lot of new guys in the EMX125 class. What’s the level like in the class this year?

Stephen Rubini: Many riders left the class and people thought the level would drop, but now the level is still high because of the new riders in the class.

Gatedrop: You are a pretty big guy and could have moved up to the EMX250 class, what was the reason for staying in the 125 class?

Stephen Rubini: For several reasons, first, the financial reason, it is impossible for me to pay a team. After much reflection and questioning, it was better to continue to build confidence, to try and win the title instead of moving up without the title.

Gatedrop: Will you start riding a 250 when practicing this year in order to prepare for a move up?

Stephen Rubini: It may be possible to do one GP, it remains to be seen but it will complicated.

Gatedrop: Do you see yourself in the EMX250 class next year or making the jump straight to the MX2 world championship?

Stephen Rubini: I’d really like to go in MX2, we talk about it with my team and my FFM coach. It will be really good for me, a big step but I want to get there.