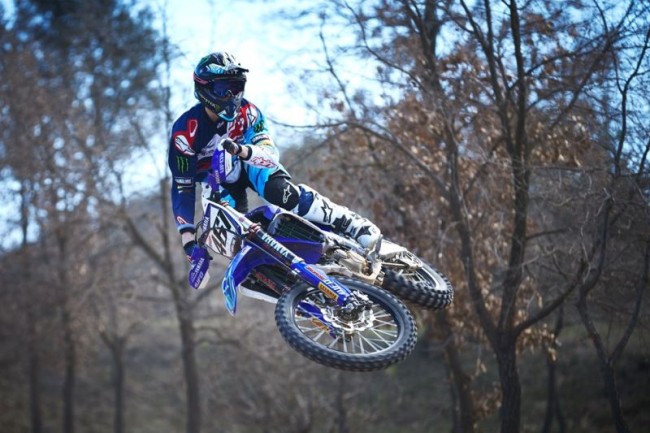 Romain Febvre was the revelation of 2015 and has continued that form so far in 2016. The flying Frenchman leads the world championship going into Valkenswaard this weekend and, although sand isn’t his favourite surface, will no doubt fight hard for the win.

We caught up with the relaxed Frenchman on the eve of the third GP of the year and discussed a number of topics.

Gatedrop: Romain, around right years ago you were racing Supermoto, then went to EMX250 as a rookie and won it, had good results in MX2 and then won MXGP as a rookie.  It’s been a fascinating career for you to say the least!

Romain Febvre: Yeah, it’s been really quick but I am used to learning motocross quite fast. I had a lot of good luck to have good people around me, to teach me what to do to find and deal with some sponsors.  Yeah, I am really happy, like I said it has been quick but we are now in the MXGP class and I hope to have many good years.

Gatedrop: When you were racing Supermoto did you ever think for one second you would be MXGP world championship? How did it feel to clinch the title last year?

Romain Febvre:  Yeah, it felt really amazing, it was my dream since I was born I think so for sure it felt great! It was my first dream so it was amazing. Seven years ago I was not thinking to win the MXGP. My dream was to just ride in the class, I didn’t care so much about the result, just too be part of it but it’s been a long journey.

Gatedrop: This year, the first GP’s are done and dusted and you have the red plate. You must be happy with how the first two GP’s went for you?

Romain Febvre: Yeah, it’s been really good. Thailand was hot like always, it was really difficult for everyone but I managed to win there so I am really happy and also to keep the red plate on the bike.  We will see how it goes, the season is really long. Now we are here at the sand of Valkenswaard, it is also going to be tough but we will see.

Gatedrop: After the first moto in Thailand you looked exhausted, where did you find the strength to win the second moto?

Romain Febvre:  Yeah, after the first moto I was really exhausted, not only just because of the weather but also because I was battling with Cairoli the entire moto.  I used a lot of energy, the stones and dust and everything was really difficult. The second moto went pretty easy but already on the first lap I was already leading which meant I could save some energy and be safe to the end, it was much easier.

Gatedrop:  You said last year that you would improve in 2016, do you feel you have already improved this year or is it a building process throughout the course of the season?

Romain Febvre:  I have improved physically for sure, last year I was really good but it was my first year in MXGP so my progress didn’t go up as much as I wanted throughout the winter before my rookie season. This winter, I had a really good winter and I think I go up with my body. The speed also, we work really good on the bike. I am really happy and I think I already showed in Thailand that my condition was good. We just need to keep it like this and go up!

Gatedrop:  You have never had to deal with as much pressure before going into a season than this year. You are dealing with the pressure well, how do you think you cope with it so well?

Gatedrop: Tim Gajser was able to win the first round in Qatar as a rookie, where you surprised with Tim’s performance?

Romain Febvre: Surprised, not really by his speed but to win the first GP, yeah.  To be a rookie for sure, you feel that you have nothing to prove as you just need to learn.  But yeah, to win the GP, he won both moto’s and was riding consistently.  So yeah, I am surprised by that but I know that he was riding really fast already on the 450 last year a lot in training. I saw him a lot this winter in Italy and he was also fast so not too surprised. I think that he is riding also to fight for the championship.

Gatedrop: At the end of your MX2 days, Factory Yamaha seemed to be the only factory team willing to sign you. You must be very thankful for them to give you the opportunity to shine in the MXGP class.

Romain Febvre:  Sure, it’s why this year why I am with them because I know that they gave me the opportunity last year.  They put everything together for myself so that I could prove to people what I can do with the bike. I am really pleased with that and for sure I am really thankful that they gave me the offer to ride for them.  I think that last year the title was the present for that.

Gatedrop:  I know you had a chance to go to America after MX2, what was the reason for moving to the MXGP class?

Romain Febvre:  Yeah, until this time I am not really focused on going and to move there.  However, never say never. Maybe in the future I could go to America.

Gatedrop:  Last year France came away with the Nations victory, you must have been happy with how that weekend went for you!