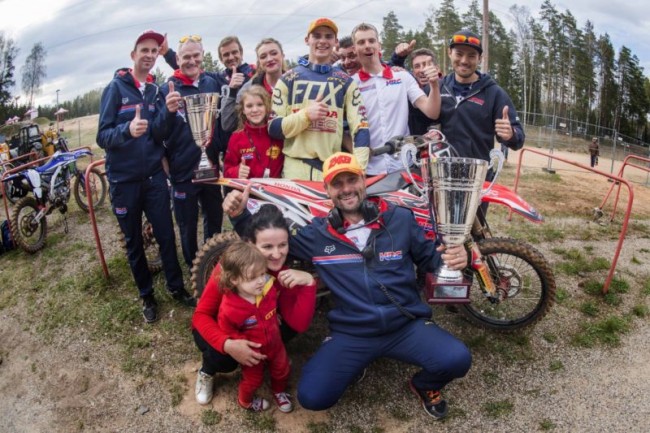 It has been a brilliant 2016 so far for Honda and HRC General manager Roger Harvey.

After a few years of investment Honda now finally find themselves with the red plate in the MXGP world championship, and they have one of the most outstanding young riders in the world, that they have smartly signed to a long-term deal, to thank for it!

Tim Gajser has been outstanding this season and Roger has some very impressive things to say about the youngster from Slovenia. We also talk about Evgeny Bobryshev and teammate Gautier Paulin as well as a couple of other topics with a man who has 40 years experience of top level motocross racing.

I guess we have to talk about Tim Gajser first, did you expect him to be this good and this consistent so soon?

RH:To be honest, we knew what he was capable of, we knew he could ride a 450 but the performances, we expected him to be up there and getting some podiums but he has surprised everyone with the way he is riding the 450 Honda.

His mental strength seems very good, he isn’t intimidated by the likes Cairoli, who he has block passed, the pressure doesn’t seem to get to him?

RH:He’s very old school in that manner, he has respect for them but on track for them is another thing. But he has respect, he has been brought up to be a very, very respectful kid. He digs deeps, he has heart – he has all that as well.

Tim has been very complimentary of the bike this year and has been getting great starts, is that pleasing to see with the progress of the bike?

RH: We did a lot of work and a lot testing and refinement over the winter, which has helped the starts with all three guys on the factory bikes. That’s a benefit, it is suiting him and he is using it correctly but you have to be out of the start, if you are back in sixth, eighth or tenth you are going to have a fight.

Just on Tim’s future he has said he wants to go to America but his team manager has said he might stay in MXGP one more year before he goes?

RH: Tim has always said he wants to race supercross, he has said that since the first day we spoke to him, that is a long term goal, but he has business to finish here (MXGP) which he wants to do first. We sit down and discuss each year, the plan is open, but we want this year to settle down a bit first before we put that load on him.

From Honda’s view, you are obviously putting a lot of investment, especially from Japan into winning a world title, he is the main guy, will it be hard to see him leave for America?

RH: Yeah Honda is a big company and we have global sales so yes it’s hard from our side in MXGP but it is a fact of what a rider wants to do and his goals in life. We went up to the MXGP class a year early, the place originally was he would be up there last year in MX2, then win it this year then go MXGP next year. But we pulled that forward by a year, so things are always very open with Tim.

How do you think Tim will fare in supercross, I know he has a supercross track at home but the USA is a different game?

RH: Absolutely no problem at all. Tim is one of the fullest package riders I have ever dealt with and ever seen and that’s going back a lot of years from my early riding days and guys that I’ve dealt with since. He has quite a gnarly supercross track at home and he is practicing that all the time and he has a track that is half motocross and half supercross so he switches from one to the other. I have no qualms he could what is required for supercross, I’m not saying he will go out and win but he can do it (ride sx) and will be a very competent.

I think a lot of people would like to see him race Herlings in MXGP before he goes to America, the two youngsters v Cairoli and Febvre!

RH: That would be great for MXGP! Whether it will materialise or not, that depends on whether Jeffrey moves up next year, you don’t know what will happen, then Tim could be gone the year after, so it may happen and it may not.

Just moving on to Evgeny Bobryshev, he was impressive last year and this year with all the injured guys back, he is impressive again he has speed and he has consistency, he has really turned himself around the last two years.

RH: Bobby has re-addressed the way he rides and it is working very well, he works really closely with JMB so that helps him in years past he would have rode to 102% and crashed out. This year he rides at 100% and stays on, that’s what he has done for the last two seasons. Yeah, he has had one or two big offs but you get them in motocross anyway. Last year I put Bobryshev and consistency together and those are two words I told him I couldn’t get used to saying! But it is something he has worked on and it’s working for him, he has the confidence and belief in himself and he is getting stronger and stronger. Our belief in him all those years when he was injured, he is showing what he can do and what we believed in all that time.

Onto Gautier Paulin, he has had another injury-ruined season so far but he came back last weekend and looked a lot more aggressive on the bike, what are your feelings on how he can do for the rest of the season?

He’s ok, basically the first race back, he had been riding a fair bit, so his fitness was good but I think being back in a race situation you have arm pump which you probably don’t get much of in practice. He has really good speed but was race rusty so hopefully he can build on that and get back to podiums and hopefully the top of the podium. There is no reason why he shouldn’t, he just has to build now and look to be getting back on the podium.

Does he feel better on the bike this year, have the improvements over the winter helped with him?

RH: I think it’s helped and I think it helps when you see the bike winning! He believes better now, so there is no arguments about the bike, whereas before when you aren’t going as you could you look for everything, and we did, we looked for everything. But I think the winter test program, the improvements, he has benefitted from that and he looks settled and more gelled with it.

Going into 2017, you have three good riders at the minute, are you planning on having three factory riders next season or making any rider changes?

RH: Not at the moment we haven’t discussed that, we want to let the season go a little bit longer to make a decision on how we will set the program up for next year and see how it settles down.

There are a lot of riders coming up from MX2 to MXGP and it almost getting to the stage where there aren’t enough rides if there are only two factory seats for each manufacturer but is it cost effective to have three factory riders in each team?

RH: It is very, very expensive to have three factory riders in terms of material, but with Gautier getting hurt this year it meant we still had two riders racing. It is a consideration we are looking, whether it is something we should be doing, but it has certainly benefitted us to have three riders this year.

How do you feel the World championship is going this year in terms of the size and exposure of the series and what is your view on the tracks?

RH: The exposure is improving all the time, the coverage is very, very good. Ok, it’s gone off Motors TV (in the UK if you don’t have sky tv) that hasn’t helped because the guys you get there are just casual watchers, they aren’t there to watch a full season, but overall the exposure from our side has been excellent.

The tracks have been up and down, there are some that could have been better but we all know what we are going to and they all have to ride them, they have to race on the same track

In your day there was a lot of hard-pack slick tracks, nowadays the riders seem to prefer a disced up rutty tracks, do you sometimes smile and imagine what today’s riders would have said riding the slick and grassy tracks you did?

RH: Yeah back in our day you used to get the tracks with bumps from the last meeting there! But it’s a different sport now, it’s evolution. Even the sand the tracks like Mantova, Valkenswaard or in the UK Hawkstone, they have all compacted down and are more hard pack underneath with a bit of sand on top, whereas back in the day these tracks had great big wallowing bumps. It’s changing completely, these guys have to ride what’s put in front of them and the fact a lot of tracks are disced up and ripped with ruts, but as long as you have the lines the guys can handle the ruts.

Justin Barcia has been showing an interest in racing MXGP at some point in his career, do you feel there is more interest in the series from US riders?

RH: I think there is interest from the American side because they have watched more closely the MXGP series, they watched it last year and more people are following it and paying more credibility to it. So I think it is being considered by some American riders but there are other things that has to come before many will come across. Some will come across to experience MXGP but they need to be on a good deal, so it could be a while, but it has certainly opened the eyes over there to see the speed and how quick the whole depth of guys in the field are.

Is that a bit of a concerns for a team, that MXGP is a different type of series compared to what they are used too and the US riders need time to adapt to that?

RH: It’s always my experience that, ok I have never dealt with a really top line American, but any I have dealt with it’s always taken, the whole things – travelling to different countries, different tracks, different procedures. They need a while to learn it and get on board with it. When they race in the US series they have a good idea of what each rider will do whereas when you are racing new guys there is a lot to take in. I think it takes a good American rider one year to learn and then one year to hammer in some results.