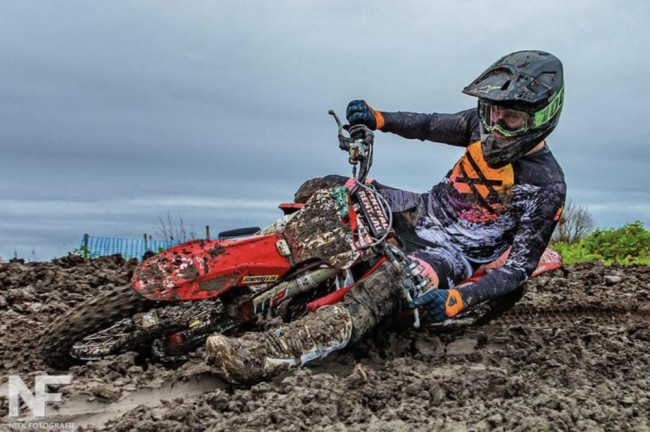 It has been a rough year for Pauls Jonass. After only two Grand Prix the former MX2 world champion was sidelined after big crash during lockdown that ended his season and the friendly Latvian only got back on the bike mid-way through November after a long five month lay-off.

But with a Gas Gas contract in his pocket, the always positive Pauls is now looking ahead and ready to get the 2021 season underway to show what he can do on the 450 – and won’t even be going back to Latvia for Christmas! We caught up with the new factory Gas Gas rider to discuss his season, the injury and his hopes for 2021.

You started the season off just outside the top ten in the first two very competitive GPs, how did you feel your riding was at that point?

The results not even close to what I was expecting at the beginning of the season. It was there I just had bad luck and crashes which cost a lot. I was feeling really good coming into the season but after two GPs I was injured and couldn’t really show what I was capable of.

At the time when the injury came I was in the best shape and the best I had been feeling on the 450. I really put in a lot of hard work during the corona time. I went back to Latvia and I could riding and do all the training that was necessary and really work hard to be ready for the season starting again but then I crashed and the season was over.

So what happened with the crash? You had a lot of injuries and it ultimately ended your season.

It happened on a jump, I don’t remember exactly how I crashed or what happened! It was a big crash – two broken ribs, fractures on four vertabrae, then the ligament on the back was broken plus six spinous processes. It was a lot of injuries but luckily I didn’t have to do surgery but I had to wear a neck brace for quite a long time for recovery. Now, at the moment, back riding, I am feeling 100%.

The recovery, was it mentally and physically hard to deal with that? And how was it to sit on the sidelines and miss the whole season and go through the rehab?

It was really tough overall. I was feeling really great and also it was a contract year and with the first races not being great I had to show some good results then obviously the injury came. Everything fell together as bad as it could happen, for sure it was tough mentally. At one point when I put everything into place and I got the deal for 2021, I knew the season was over already so I could focus on 2021 and everything was getting easier and I could start to focus on the future.

As you said signing for Gas Gas has given you a lot of hope and motivation, you are back ont he bike now so are you feeling rusty at all or are you getting into your groove already?

I have been back riding nearly a month. I was actually surprised at how good I was feeling the first time I got back on a bike. I was off for five months and straight away it went quite good. I was feeling good, at some points I was worried about I was gong to feel with the back and everything, but I really put in a lot of work in rehab, I worked hard with the physio therapists and the body was in good shape for when I went back on the bike. I didn’t want to rush because when you rush the next injury comes and it gets even worse.

I was already in a pretty good shape when I came back on the bike but I was pretty surprised how good it went from the first time but now I am still taking it quite easy on the bike. I am trying to get in a flow and doing longer and longer motos. I can already do 3x 30 minutes which is pretty good, of course it’s not pushing and not race speed but like I said there’s a long time until the season starts to get back to the speed. I am feeling good on the bike and overall I’m happy with the situation and where I am at.

The Standing Construct team has a good repuation of getting the maxiumum out of the riders, Coldenhoff has done fantastic there and you are essentially replacing him so are you ecxicted to see what your limit is in the MXGP class as well as representing a new brand with Gas Gas?

For sure, it is quite exciting! It’s something special for me because I have been on all three brands from the KTM group which is quite special! Overall like you said they had some really good results with Glenn and and also the other riders they have made a good improvement with in the past. So far we have been working one month and I am really happy with how the team works and all the crew who are there, all the staff and the team owner. I am really happy and I think we can achieve some good results.

With the season not starting to April are you having to hold yourself back from doing too much at the minute? To keep everything going slowly instead of getting ahead of yourself with the injury and testing. I am sure you are really keen to get going again!

Yeah for sure, it is actually tough to slow myself down! Because training I feel it is going to fast at the moment and I haven’t been riding so much but I know I can go faster but I just try to calm myself down. Like you said the season doesn’t start until April which is later than normal so it’s still some time away and it’s not so easy to take it easy! Somehow I have managed to switch off my mind from let’s say “racing mode” and go more into “training mode.” It’s good, I am really enjoying riding at the moment, injury sucks of course but it’s always nice to get back on the bike because you are so excited and you are really enjoying every time you go riding.

On injuries, there was a lot of them overall in MXGP this year, what are you thoughts on that? Are there reason for it or has it just been a bit of an unlucky season?

I don’t know, it’s hard to say the reason. I think the class is so competitive that everyone is going so fast that you need too.. you cannot go at 98% you need to go at 100% to be up front. Everyone is so close together. I think it is also just a bit of an unlucky season because in 2015 many good guys were out so it happens sometimes. There is betters seasons and worse season for injuries but that is motocross and the injuries will come, you cannot go without it but it’s a pity because there were many hard injuries this year and it’s never nice to see guys get hurt.

The one day format, or the two days – what do you prefer?

I didn’t race any of the one day format but I think overall it’s not bad, first day the European and the second day is MXGP and MX2. I think it’s good for everyone, the EMX guys have a flatter track and the MXGP guys have a rougher track. I think it’s not bad but I cannot say for sure I would have to try a few to tell the difference but from the sidelines as a spectator I liked the format.

Moving into 2021, there are a couple of guys who have retired from MXGP, but you have Thomas Kjer Olsen and Ben Watson moving in. What are your goals having essentially missed a full season?

The main goal is to go injury free and have a consistent season. We have have seen in past years and also this season, it’s not always the fastest guy that wins. many times it’s better to go slower and be consistent and not get hurt. In MXGP you need to be consistent but also of course fast because without the speed you cannot get a good result or win the title.

You were world champion for course in MX2. Do you still remember that feeling of being world champion and is it still a motivating factor for you in the MXGP class?

Of course, that feeling – it’s impossible to forget! That was one of the best days of my life when I won it and still look at the videos and pictures on my phone of the celebrations that gives me motivation. For almost everyone on the gate the big goal is to win but at the moment I just want to take it step by step and the first goal is to be consistent and go injury free.

In Latvia, with your world championship, motocross seems to be doing well there, has your success brought a lot of spotlight to the sport?

Yeah, the media is following MXGP more, now you can see they are showing MXGP live on two TV channels which is goof in my opinion and that has brought interest from the side and they are now showing the Latvian championship races on TV which is pretty cool. I think overall it will help to grow the sport, maybe not in the next year but the near future for sure.