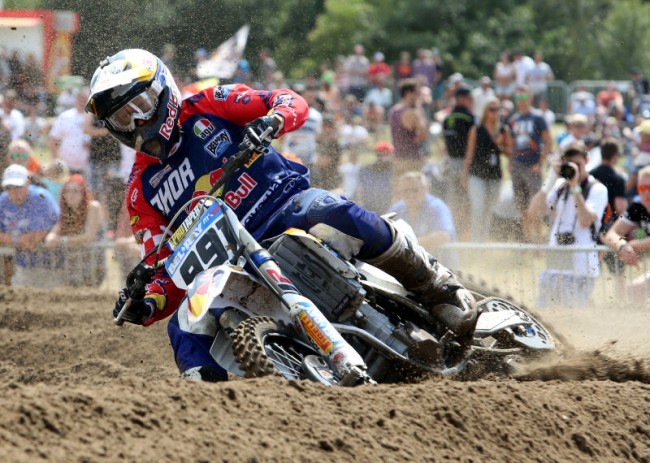 Just two years ago Nathan Watson was riding the British Championship for Dantec Husqvarna but after an injury to Todd Waters he was then able to fill in for him in the World Championship. Anyone who has been to the GP’s will know just how big and impressive the Factory ICE ONE Husqvarna set up is. A lot of pressure for Nathan to perform but he has excelled and is one of the most improved riders in the GP paddock this year.

He had his best ever GP at Loket just two weekends ago which shows he is improving his hard pack riding. The future is bright for Nathan and it is clear that being on a Factory team is helping him and also having Antti Pyrhonen to work with is helping him move to the next level. A factory team can often be too much pressure for some riders to handle and it can lead to failure but it looks like the exact opposite for Nathan as he now looks like one of the best prospects for the future in MXGP.

We caught up with Nathan at Lommel to talk about his rise in the GP paddock and his season so far..

Gatedrop: Just two years ago you were a British championship rider and now you have a full factory ride in MXGP, which must feel pretty good.

Nathan Watson: Yeah, it’s crazy. Obviously, looking at all the guys coming through from Britain. There hasn’t been many racing the British championship that have made the step to the GP’s, I really didn’t expect it to be honest. In 2014 I got the opportunity to fill in for Todd and I tried to make the most of it, it worked out really good for me and I managed to seal a ride for 2015 so I was really over the moon with that.

Gatedrop: Obviously there was an injury to Todd but how did the deal get put in place for you to be the replacement rider?

Nathan Watson: Yeah, basically I am good friends with Jamie Dobb and Jamie knows Antti, he got in contact with him to say there is a guy in the UK who is sponsored by Red bull so I really fit the deal. Jamie give me Antti’s email and told me to email him to see if anything could come out of it. I emailed him and he got back to me saying that they really needed someone and they choose me so yeah, it was amazing.

Gatedrop: How good is it to have someone like Antti as a team manager?

Nathan Watson: Yeah, he’s amazing, I really can’t thank him enough for the opportunity because I had just stepped into the class and I think my best ever result was eleventh. I was able to show a bit of speed and put some good times in free and timed practices. Yeah, he didn’t have to take me on but you know he really believed in me and he has helped me a lot. He is really good, he always gives me tips and with him the rider always comes first so it’s amazing.

Gatedrop: When you were younger you rode in Holland as well as England, do you think that has helped you and do you think other riders from the UK should do the same?

Nathan Watson: Yeah, definitely. I mean to be honest I didn’t really go over that much when I was younger, like when I was on the 80 and stuff. When I got onto the 125 I started doing good in the UK and started to be more dedicated and thought ‘yeah, lets give this a shot’. We then started to go to Dunkirk on the weekends at winter because not a lot of the tracks in the UK were rideable. Dunkirk is really deep sand so you can ride it in any condition, it was super rough all the time and I think that is where I learnt how to ride the sand. It’s strange how I can ride good in the sand but today you wouldn’t really think that because the track was so rough, I have never rode anything like that before and I’m just not strong enough yet but it will come.

Gatedrop: Last week in Loket you had your best GP of your career so far, you have made big progress on hard pack.

Nathan Watson: Yeah, definitely. You know everyone thinks ‘yeah, I’m a sand rider and can’t wait to see Nathan Watson in the sand blah blah blah’. Personally, I think I am just as good on hard pack as I am in sand now. On flat sand I can go really fast but I really worked hard on the hard pack and tried to practice as much on hard pack tracks as much as possible. It has seemed to pay off, I have a really good bike and I seem to be getting better results so I will keep working.

Gatedrop: I noticed this weekend you are running different forks, is your bike not identical to Todds and did the change make a good difference?

Nathan Watson: Yeah, I am running the full air suspension, I think I am the only GP rider – MXGP and MX2 to run the full WP air suspension. The guys have been working really hard with me and yeah it is really good, I’m really happy with it and I will keep working with it.

Gatedrop: Going back to this weekend, are you disappointed with the result after the speed you showed on Saturday?

Nathan Watson: Yeah, I am actually really disappointed, I was looking to improve on last weekend in Loket. No excuses though, I was simply just not strong enough and I just couldn’t push for longer than twenty minutes, I was just hanging. Unfortunately in the last race I got disqualified for cutting the second corner which was a bit steep as I did the whole race and then they disqualified me so yeah, I am really disappointed.

Gatedrop: Have you set a mini goal you would like to try and achieve before the end of the season?

Nathan Watson: I just want to keep cracking in the top ten and I think the next few races are going to suit me as well. It won’t be such deep sand but just sandy and yeah, I just want to keep getting top ten results and hopefully get closer to the top five and try to seal myself a good ride for next year.

Gatedrop: There is one spot left in the Team GB nations team, you must think you have a decent shot at getting selected..

Nathan Watson: Definitely, you know it would be a dream come true for me to ride the des nations and I would really put my heart into it and give it 100%. There are also some good riders competing with me for the position so who knows. I’m trying not to think about it too much but if I got selected I would be over the moon, if not I will work on it for next year!

Gatedrop: Rumours are that you might be riding the last British round, any truth in that?

Gatedrop: Last question, what are your plans for 2016?

Nathan Watson: It’s still up in the air, you know as much as I do to be honest. I am trying to impress my team and I would really love to stay where I am but it’s going to be difficult. It’s harder because some of the teams are getting cut down to a two rider program so yeah, it’s going to be difficult, I’m going to fight for that last spot but if not we will see what happens, I just want to have a good bike.