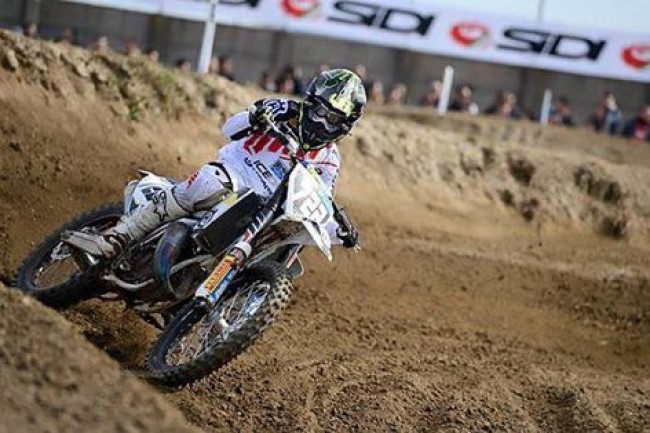 This year the EMX125 class will have a lot of rookies moving into the class. One of them will be Mikkel Haarup who will contest the series on-board an IceOne Husqvarna.

During the 2015 season Mikkel started the season well on-board his 85cc winning quite a few moto’s. However, he suffered a serious injury after breaking his hip. If Mikkel had stayed fit he definitely would have challenged for the European and World 85cc championship titles that Raivo Dankers ended up winning.

We caught up with Mikkel to discuss his serious injury he suffered last year and how he finds adapting to the 125cc machine.

Gatedrop: Last year you had a serious injury, can you explain the injury you had and how did it affect you?

Mikkel Haarup:   I broke my hip after an ADAC race, in Holland. It took the hospital 2 weeks to find out how serious it was. When they found out they made a surgery, I was out from middle August to last November. I try now to catch up with the missing hours. For every time I am on the bike I get better and more confident.

Gatedrop: Was it hard to get back to your level after such a bad injury?

Mikkel Haarup: It is very hard work to get back after such a big injury, but if you want it bad enough you can do it!

Gatedrop: You have now had six motos on the 125, how do you find the bike and are you happy with your races/speed so far?

Mikkel Haarup: I feel very confidence on the bike now and start to get some speed. I still make some mistakes and that I am working on. Until now I had 3 races and have been on the podium all 3. I had 3 holes-hots and 2 heat wins, so that it okay. But again, also still some mistakes and still need some more speed. The EMX125 starts first weekend in May, so there is still some time.

Gatedrop: How did you find the adjustment from the 85 to the 125?

Mikkel Haarup: The step from the 85 to 125 wasn’t that hard, because of my injury I had not been on the bike so long, so I had to start a little from the beginning again anyway.

Gatedrop: Ice One have signed for you the season, how did it feel when you find out they were interesting in signing you and how does it feel to ride for the team?

Mikkel Haarup: I was really happy when I found out. There is no KTM junior team anymore, so for me it was so perfect to go on the Husqvarna and to be a junior member of IceOne Factory racing is a dream come true. Now that I have been working with them almost two months, I start to feel more and more confident with the guys from the team. They have all given me a very warm welcome.

Gatedrop: Antti Pyrhonen is your team manager, what is it like to work with him?

Mikkel Haarup: Antti is a very good team manager. He is very helpful and he has a very good structure in the team. He is a very dedicated man. He likes everything to be perfect, and that is how I like it.

Mikkel Haarup: Of course I try to learn all the time. I try to not make so many mistakes. Rubini is a good rider and he has more experience, but this weekend in the second heat I was able to keep him away.

Gatedrop: You will be a rookie in the EMX125 class, what your goals for the season?

Mikkel Haarup: My goal is not to make too many mistakes then I know the speed will come.

Gatedrop: What tracks suit you the most, do you prefer hard pack or sand conditions?

Mikkel Haarup: I don’t really have a favourite track condition, I normally feel good on all condition. But I like the sunny days where everything is perfect.

Gatedrop: What rider do you look up to most?

Mikkel Haarup: I try to learn the best from many riders. But 2 riders I can highlight are Dungey and Carmichael. I look up to them because they are/where smart and fast riders. They try/tried to make as less mistakes as possible.