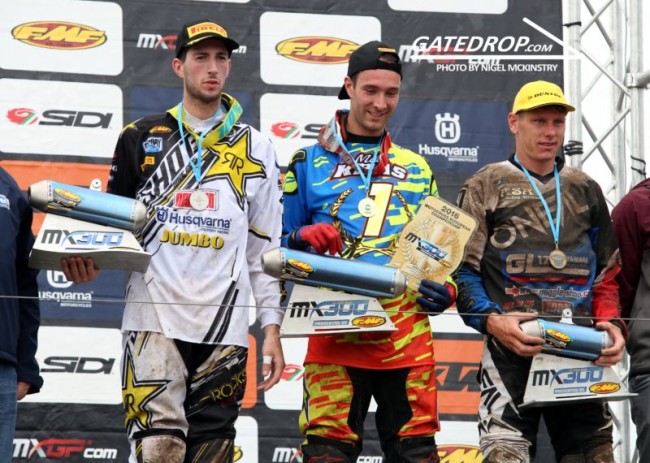 During the Lommel GP championships were won and lost. Dutch rider, Mike Kras was able to win the EMX300 championship. Lommel is close to his house, only an hour drive so it was a good place for him to win it with plenty of his fans their to cheer him on. Mike didn’t disappoint and he was able to bring home the title.

Mike’s career hasn’t always been full of joy. The talented dutch rider looked like he could be a good prospect but arm pump held him back when he was trying to make a name for himself. Then in 2014 he had a crash and a massive injury, after such a big injury it is nice to see him back on the bike again and having fun.

We decided to catch up with Mike to talk about his EMX300 success.

Gatedrop: Mike, how does it feel to be EMX300 champion?

Mike Kras: It really feels awesome! I know this class isn’t at the level I should be riding but when I look at my life at this point its pretty impressive that I made it. 40 to 50 hours of work during the week and after that it’s training, cleaning and fixing the bike so it’s a busy life.

Gatedrop: At the last few rounds did you take no risks in order to make sure you clinched the title?

Mike Kras: After the second race in England I knew that I had to take points at the emx in loket so that I didn’t have to win in Lommel.  I know that yentel (Martens) knows the way around that track. So, I took a ten point advantage into loket so two fourth place finishes was enough in Lommel.

Gatedrop: In 2015 you did a few rounds, after doing those rounds you must have liked the series and wanted to do more?

Mike Kras: In 2015 I did two rounds and after that I didn’t know that I would be riding them all in 2016. The team sponsor asked me in February if I would be interested in riding the full EMX300 calender.

Gatedrop: A lot of people think it’s just the EMX300 but actually it’s not that easy with some good riders in it like Martens and Anderson..

Mike Kras: The pace this year was very high, I can tell you that! Also, riding a two stroke isn’t easy because you don’t have the power like you do in a 4 stroke, there is no bottom power  and no engine brake what so ever. So, you have to work twice as hard to stop the bike and to keep it in high rpm.

Gatedrop: What was the highlight of the season for you?

Mike Kras: Of course Lommel! It is close to my house, about an hour drive. So, I had many friends and family their that weekend to cheer me on.

Gatedrop: For people that don’t know you had a really big injury that halted your career, can you tell me more about it? How hard was it to come back?

Mike Kras: In 2014 I had a big crash in Eersel. Some rider went down behind a jump and I hit the bike and went over the bars. I broke my neck in three places, my back in three places, two ribs and a collapsed long. After four months of walking with a brace I started riding again but not at a professional level. I see it more as a hobby right now.

Gatedrop: Back in 2009 you finished fifth in the first MX2 moto at Lierop. How amazing was that and especially in front of your home crowd?

Mike Kras: Yeah, Lierop 2009 was really amazing!! After that race the KNMV selected me to ride the MXND for Holland. I have a special feeling for Lierop.

Gatedrop: Back then I believe you suffered a lot from arm pump, how frustrating was that?

Mike Kras: aaaaaaaah the arm pump! Man, if i didn’t have that in my racing career I believe that I would have gone a lot further. When you have it, it is not possible to ride fast laps because it’s impossible to hold on to your handle bars. I have had an operation three times now. For now it’s good but also I don’t have the stress level anymore like i did back then.

Gatedrop: The EMX300 championship will stay in the MXGP paddock for 2017, can you confirm if you will defend your title?

Mike Kras: For now I cannot answer that question. i don’t know what will happen after this winter. i will try to get the number 1 KTM behind the gate in 2017 but it’s not for sure.