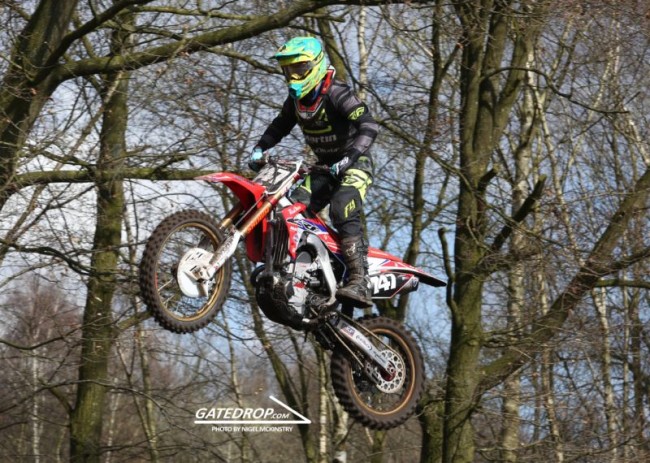 The MX2 World Championship is stacked with so many fast and talented riders but since the start of the season one guy that has been impressive but gone under the radar is Michele Cervellin. Michele is riding with the Martin Technology Honda team, Honda don’t have the best 250 in the world but he seems to gel with the bike really well.

Michele missed the oversea GP’s at the start of the year so his first GP of the year was in Valkenswaard. I was at that GP and I have to say I was really impressed with his speed, the Italian isn’t known for his sand skills but a seventh overall was a brilliant result. Also, at the recent Spanish GP he confirmed his speed and went ninth overall.

Michele is one rider to keep an eye on for the rest of the year, the MX2 rookie is showing good speed in a stacked class so don’t be surprised to see him get a good ride for the 2017 season.

We caught up with Michele to discuss the great season he is having on-board his Martin Technology Honda.

Gatedrop: This is your first year in the MX2 class, have you been happy with your season so far?

Michele Cervellin: yes, I’m happy with how it’s going, it is what I wanted during my first year in the MX2 class.

Gatedrop: Spain was a good GP for you going ninth overall, you must have been happy with how that GP went with you?

Michele Cervellin: I’m satisfied with how the race in Spain went, I enjoyed the track very much. The best GP for me was Valkenswaard with a seventh overall.

Gatedrop: You rode the Italian championship before the season and you won the series, did that help your confidence that you could get good results in MX2?

Michele Cervellin: Yes, especially for my results in the International championship. It went good for me.

Gatedrop: Not too many Honda riders are doing that amazing in MX2 this year but you seem to love the bike, what is it about the Honda that suits you?

Michele Cervellin: I like my bike. It is almost ten years that I have been with Martin Technology, it is like a second family for me. I love how they take care of me and my bike.

Gatedrop: Heading into this season as your first in MX2, what were your goals for this season?

Michele Cervellin: My goals where to be consistent in all the results and try to be in the top ten.

Gatedrop: Your Martin Honda team have always been an EMX250 team, what was the reason for switching to MX2 this year?

Michele Cervellin: I’m growing up so this was the perfect age to gain a bit of experience and to think about next years in the MX2 class.

Gatedrop: What’s the level like in the MX2 World Championship compared to the EMX250 class?

Michele Cervellin: In the MX2 the first five-six riders are very very fast while in the EMX250 class lots of riders have the same speed.

Gatedrop: With the rides you are putting in this year, you must think you have a good chance of getting a good ride for next year?

Michele Cervellin: I hope so. I want to keep growing up for the next year to get even better results.

Gatedrop: You are riding really well but seem to be going under the radar, is that frustrating?

Michele Cervellin: Maybe a little bit but I’m trying not to think about it and to stay concentrated in the races. Also, it is a big motivation for me.

Gatedrop: Out of all the tracks left in the calendar what ones are you looking forward to the most and why?

Michele Cervellin: No, I want to do my best in all the races! No differences for me. But I know that I did lot of training in the sand so I think that I can do well at tracks with a lot of sand.

Gatedrop: Last year you represented Italy at the Nations, how was that experience for you and you must think you are in with a good chance of going in 2016 again?

Michele Cervellin: Yes, it was a fantastic experience. For sure I would love to race also this year but it will be up to the Italian federation to decide who will represent the nation in the best way.