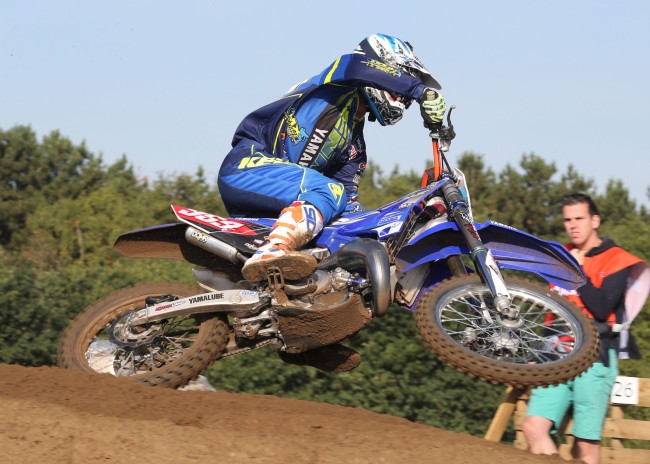 The season was going great for this new French man on the block! Challenging to win the EMX125 championship all season long after surprising a lot of people with his speed earlier in the season. He then won the Junior World Championship that was held a few weeks ago as him and Conrad Mewse had an epic battle in both the moto’s. The Frenchman was able to just edge the Brit out to take the title.

Unfortunately, after the Junior World Championship he picked up an injury preparing for Lommel, he tried to ride at Lommel as he participated in qualifying but he was in too much pain.

We caught up with Maxime to discuss the injury, his win at the Junior World Championships and plans for 2016.

Gatedrop: You aren’t riding lommel after picking up an injury, it must be tough for you to watch..

Maxime Renaux: Yeah, it’s not so nice especially seeing Prado and Natzke riding so well. It’s not so good that the season has ended like this just after one mistake but I will come back stronger.

Gatedrop: When did you get injured and were did it happen?

Maxime Renaux: Yeah, I was practicing in the sand at Eindhoven on Wednesday to get ready for Lommel and I had a big crash. I broke my shoulder, I tried to ride yesterday but it just wasn’t possible, I was in too much pain.

Gatedrop: A few weeks ago you won the Junior World Championship, which must have felt amazing!

Maxime Renaux: Yeah, it was a very good experience and we had a big fight with Conrad. I am really happy to have won this championship, now I have met another target. The next target is to go on the 250 and prepare for another year.

Maxime Renaux: The track was very good in Spain, I think the people that prepared the track worked very well and did a very good job with track. The track was actually similar to Matterley Basin but it was a little bit harder underneath so it was the perfect condition for me.

Gatedrop: The track was quite fast, did that make it more important to get a good start?

Maxime Renaux: Yeah, actually it wasn’t very very important because the track had many lines and it made it easier for passing many riders, it was a very cool track.

Gatedrop: You got two brilliant starts so that made it a bit easier for you?

Maxime Renaux: Yeah, it was not so difficult to finish first but the fight with Conrad was very very hard, he rode really well and pushed me all the way.

Gatedrop: Before the race, Prado and Natzke were made big favourites, were you surprised that Conrad was the one to push you?

Maxime Renaux: No, not at all, I know that Conrad is a very very good rider so I wasn’t surprised by that, we both rode a good pace.

Gatedrop: Do you know when you will be back on the bike yet?

Maxime Renaux: I don’t know yet, I think in 3-4 weeks. I really hope to be ready for Assen but I am not very sure at the moment.

Gatedrop: Will you be staying with Kemea Yamaha?

Maxime Renaux: At the moment I don’t know, we will wait for position. For now, I think we will be with Yamaha, if they can do the material to do this then it’s no problem.

Gatedrop: Have you any experience on the 250 before?

Maxime Renaux: Actually no, I have never rode on a 250 before so I will prepare for next season when I can get back on the bike again.

Gatedrop: You are a pretty big guy so the 250 should suit you well?

Maxime Renaux: Yeah I think it is going to be very good and I will have a good season.