Interview: Max Nagl talks about leading the championship and the MXGP of Germany 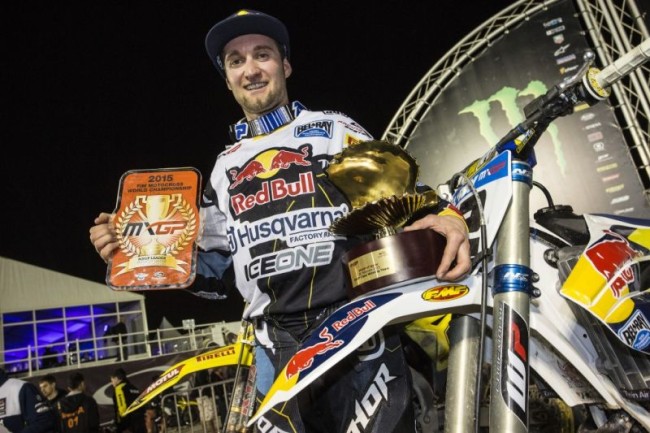 With a 30-point lead in the MXGP championship and five race wins to his credit, the Red Bull IceOne Husqvarna Factory Racing rider has enjoyed an amazing season to date.

With the MXGP of Germany marking the second half of the series in this ultra competitive title fight, Nagl wants nothing more than to deliver a winning result on home turf in Teutschenthal this weekend…

Max, it’s your home GP this weekend in Germany, you must be excited to go there as the red plate holder?

Max Nagl: “I’ve been looking forward to this race for a while now. A home race is always special but getting to start it as the red plate holder of the MXGP class makes it just that little bit more special. I’ve sort of been in this situation before when we raced the Motocross of Nations there and I rode with the #1 plate. It was a magical experience so I’m hoping this weekend will be something similar.”

How are you approaching this race, do you feel any added pressure?

Max Nagl: “Not really. Of course the fans and spectators want to see a home win and I will do my best to achieve that. In a way I feel lucky that this race is coming at the halfway point in the championship. I’ve got a healthy points lead so there is no title pressure on me yet. I can go to Teutschenthal – a track I really love to ride – and race my heart out for the podium and hopefully the win.”

Aside from race one in Italy last weekend you’ve been incredibly consistent this year. Is that the key to being successful in this extremely competitive championship fight?

Max Nagl: “In a close championship like this being consistent and always fighting to be on the podium is critical. So far I feel like things have been working well. Out of 16 races the first race in Italy was my only bad one. The mud made things a bit of a lottery there and I just got unlucky. But despite my problems I still scored six points and rebounded to place second in the next race. I’m pleased about that and need to continue the season in this way.”

Looking back to your double victory at the series opener in Qatar. How did that result mentally boost you this season?

Max Nagl: “To come away with a double win in Qatar was beyond my wildest dreams to be honest. Ok, Qatar is different to every other race because it’s held at night. But I’ve always liked the track and last year I managed to win a race there. Winning this year was huge for me. Having just joined Husqvarna and claimed a win that nobody expected was very important for both the team and myself.”

You’re always very grateful of the IceOne team in post race interviews. How are you enjoying your first season with Red Bull IceOne Husqvarna Factory Racing?

Max Nagl: “At this level it requires a massive team effort to achieve success. I really feel that by joining this team the pieces of my motocross puzzle have come together. It’s a strange feeling to describe but I love being at the races with them and already we know each other so well. My FC 450 is unbelievable – I’ve never had a feeling like that before with my bike. But also Antti – my team manager – was once a professional rider, we raced together, so he knows exactly what I’m thinking. He knows what’s important and what’s not. As team owner, Kimi Räikkönen also thinks the same way. I feel this is why that even though we are small in terms of personnel we are the best.”

Now that we are halfway into the season are there any other riders surprising you that you didn’t expect?

Max Nagl: “I think I’m surprising everybody by leading this championship! In the beginning a lot of talk centred around two riders – Antonio Cairoli and Ryan Villopoto. But this class is so competitive I knew it wouldn’t be the case. Gautier Paulin and Clement Desalle were always going to be strong and now there’s guys like Romain Febvre winning races too.”

Looking towards the rest of the season, what’s your approach? Do you still fight for race wins or simply try and maintain your 30-point lead?

Max Nagl: “Maintaining the red plate is the priority but with nine rounds done and still nine more to go there is a lot of racing left in this championship. I can’t really think about winning titles just yet. My focus is to take things race by race. Be smart and avoid the big mistakes. I must fight for victory and fight for the podium but also understand that there will be some days where winning won’t be possible and then it will be better to settle for one place less and conserve my overall position.”

Finally on a personal note, what would it mean to stand on the top step of the podium in Teutschenthal on Sunday?

Max Nagl: “Winning your home race is one of the best things you can do in your career. It would be an amazing feeling to stand on the top step of the podium on Sunday. Having the support and energy of my home crowd behind me will hopefully push me on that extra bit to take the win.”

Round 10 of the FIM Motocross World Championship takes place in Teutschenthal, Germany on June 21.