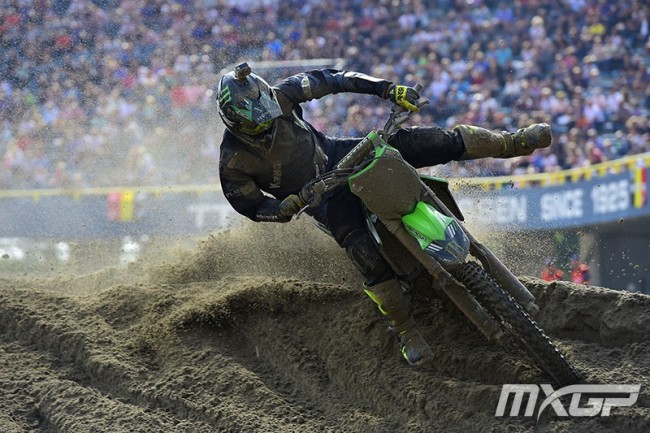 Since leaving America and coming to race the World Championship it has been a real journey for Max Anstie. Having rode for a lot of different teams such as CLS Kawasaki, Gariboldi Honda, Rockstar Suzuki and Cosworth Yamaha. This year is he riding for Dixon Kawasaki and it looks as though this is the year that everything is coming together for the Brit.

If Max didn’t get hurt earlier in the season then he would be a serious contender for the title as he has been in brilliant form. Max is also looking a lot stronger in hard pack in 2015 and that is very encouraging and with the confidence is he riding with right now he will challenged for the title in 2016.

We caught up with Max at Assen to talk about the season and his GP journey!

Gatedrop: Good weekend again for you, just a crash costing you in the first moto!

Max Anstie: Yeah, you know it’s difficult, it’s the world championship and we have been really pushing. I think we pushed myself and the bike to the limit in the first one. Yeah, I made a mistake and I went down but I knew right when the gate dropped that something was up and I lost a lot of power, I think I was just trying to push a little too hard early on and it kind of died, then I ended up crashing but at the end of the day its soft out there so wasn’t really a big deal. The second race was okay, got off to a good start, made a few passes but still with ten minutes to go I was like ‘oh no’, the bike was making a few funny noises but we brought it home, it’s the name of the game. We will go back to the drawing board and go again!

Gatedrop: You have been on a roll lately, are you relieved because you have been searching for this consistency since you have come to the GP’s?

Max Anstie: Yeah exactly, to be honest it has just been a road, it’s a path I have had to go through and learn. I just feel like I am growing and each week I am growing and learning. It’s strange because I don’t ride any different when I’m winning or when I’m not winning races, I just feel the same. I rode harder in the first race today than what I did in the second race. It’s just a learning thing and yea, it’s going good and I am really enjoying it.

Gatedrop: Everyone knows you’re good in sand, you almost won the overall in Loket, do you think an overall win in hard pack is the last thing you need to achieve in MX2?

Max Anstie: To be honest, that race in Loket felt better than me than winning in Lommel or winning anywhere. I know I didn’t finish the second race but that was down to a mistake on my part but I was fastest on the hard pack as well and could go get the job done.  Loket was a really good moment for me.

Gatedrop: Will you concentrate more in hard pack over winter to try and get the hard pack win next year?

Max Anstie: No, not really. At the end of the day I was fastest in Loket and I think that is the worst track there is. I know I didn’t finish the second race but I was out in front until my crash, it was only because I started to think what I was going to eat or something and my hand wanted to come off. But no, at the end of the day it’s been good. In Germany and stuff and everywhere we go we know the settings and we know where we are at.

Gatedrop: With the form you are showing you must be really excited for the nations?

Max Anstie: Yeah, the nations is going to be awesome. It’s great to be going and representing my country, I’m going to put on a good show. Shaun is riding awesome and so is Dean so I think it’s going to be good fun.

Gatedrop: This could be the year team GB get the podium!

Max Anstie: Pffft all we can do is do the work and try to do the business and see how it goes.

Gatedrop: What are your plans for next year?

Max Anstie: My focus at the moment is on this year and try to get the job done in the races I have left.

Gatedrop: In your GP career you have had to develop a lot of bikes, do you think you have learnt a lot as a rider because of that?

Max Anstie: Yes, I do feel like I have learnt a lot and now I know exactly what I want in a bike and how I want to set things up. Myself and the team have worked really hard this year to get things to where we are at now. I am still focused on this season, next week at Preston Docks, then Mexico, then America. Next year things, at the end of the day are down to my manager, Jamie Dobb and at the moment I can’t say much about what is going on out of respect for my team and people around me. I want to just focus on the job at the moment and win as many races as I can for the rest of the year and do what I can.