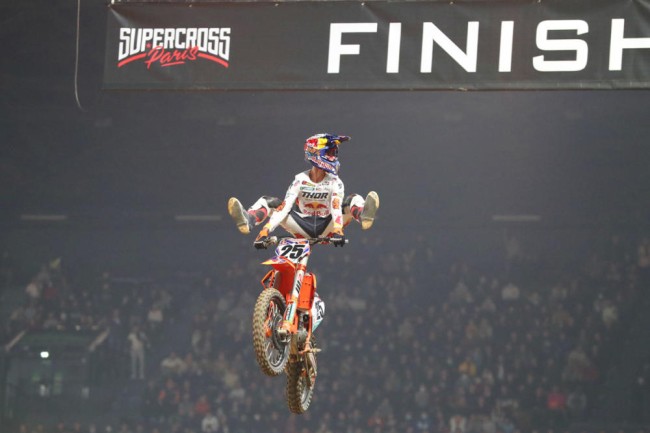 Marvin Musquin dominated the Paris supercross all day to go fastest in superpole and then lead all three races from start to finish in a brilliant display of precision and control. The Frenchman, who is now working with David Vuillemin, looks to be coming into the 2022 supercross season approaching his best form and we caught up with the 2021 King of Bercy to get his thoughts on the win.

Great ride, all three motos, it looked like you just controlled everything out there – how did you feel?

That was the goal, to get the holeshot, try to get a gap and then control that. We had superpole and three motos, really enjoyed it, the goal as to win that’s awesome.

The word was you were flying on the test track in America, and you looked good from the first time you hit the track this weekend – do you feel good going into the season?

Yeah I do, It’s a still a long time, a couple of weeks before the opening of the season. We have been working hard and I have David Vuillemin in my corner so it’s pretty good.

And Vuillemin, you had Aldon Baker as a trainer for a number of years, does David focus more on the technical riding aspects than the physical training or what way does that work?

it’s a combination of Obviously the technique but it’s the laps, the speed the intensity. I knew it was going to be a new program and that’s exactly what I wanted.

Do you feel a lot stronger coming into this season than last year? Obviously you had a lot of injuries coming in last year.

Yeah I mean the preparation is still not finished but hopefully I will feel better still when January comes.

And just on team France, you won the cup today, Romain (Febvre) was flying, Cedric (Soubeyras) rode really well as well and what Dylan is doing and Maxime, you are so strong as a country right now, it’s unbelievable!

Yeah, it’s been great. I am super happy for Cedric Soubeyras getting second in the Paris supercross, it’s awesome and yeah, even in America me and Dylan are representing France so it’s good.