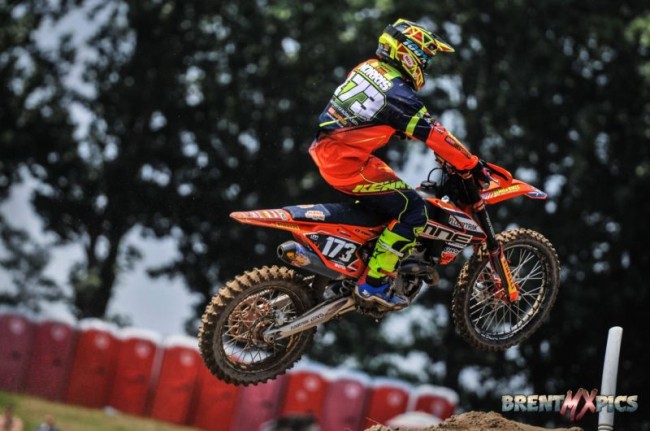 One rider that is starting to step it up as the season draws to an end is definitely Luke Norris. Luke was highly rated as a youngster but the jump from youth racing to adult racing can be difficult. However, during the 2016 season Luke has started to improve his riding and the results are starting to come.

Foxhills was the best he ever rode and he just missed out on the overall podium! It’s definitely a step in the right direction for young Norris. This will give him confidence heading into the off-season. If he can build on this then don’t be too surprised if he takes the 2017 by storm and comes out swinging!

We decided to talk to Luke about his brilliant day at Foxhills.

Gatedrop: Luke, a brilliant day for you at Foxhills, can you talk me through your day?

Luke Norris: Yeah it was a really good day for me, it started off great with qualifying fourth which definitely helps on the start at Foxhills. I always enjoy this track as it gets pretty technical and I love it. I got a good start in both moto’s and just stuck to my plans. It felt really good running up the front and I just rode how I know I could. The first race I finished in fifth which I was seriously happy with but I knew I had the speed to run top three. The track was pretty gnarly in race 2 but i loved it and had some really good lines. I got myself into fourth and had BryMac ahead of me. I just clicked off my laps and knew where to make the pass stick. It was the most fun I’ve had racing in a long time and I was over the moon finishing third! I missed out of the overall podium by two points but i’m still so happy with 4th.

Gatedrop: It must have felt good battling with top guys like BryMac and Barr all weekend?

Luke Norris: Yeah, it was so much fun racing with both of them, especially the second race battling with BryMac on his last race. He pushed me all the way to the end, I couldn’t shake him off!!

Gatedrop: The last few months seems to have been going better for you, what do you think that’s done too?

Luke Norris: To be honest I’ve just stuck to all of my plans and not given up when the races haven’t gone so well. It was always going to be difficult after having a year out with injury but I knew my speed and fitness were good, I just had to make it all come together. I’ve got some amazing people around me and without them none of this would be possible.

Gatedrop: Have you changed anything that has helped you ride better and get better results?

Luke Norris: I changed a few things on the bike which made me feel a bit more comfortable and had to start being more aggressive, that’s one thing that was letting me down. I’ve had an amazing bike all year thanks to my dad (MNE) so it’s just been down to me getting it done. My fitness has been extremely good all year thanks to AR Fitness, we’ve just stuck at it and he’s not let me give up.

Gatedrop: You have been racing some EMX250 rounds, have you been happy with how they have gone for you or do you want more?

Luke Norris: Yeah I’ve been pretty happy with how they went, I don’t think people understand how difficult they are. Everyone is so close on speed it’s all about getting good starts and limiting the mistakes. Each round I’ve got better and scored points in a few races but I definitely want more.

Gatedrop: What’s your thoughts on the level in the EMX250 championship?

Gatedrop: How hard is it being a privateer and having to compete against guys on much better machinery?

Luke Norris: I’ve been extremely lucky my whole life to have a dad who know’s what he’s doing and prepares my bike to such a high level. He’s always thinking of ways to get more performance and I think I’ve proved at European races its on par out of the start with some of the factory machines. I’ve had great suspension all year from Mark at RSS so I feel like my machines as good as anyone’s out there.

Gatedrop: You were a highly rated youngster, do you think you are only starting to put it all together now?

Luke Norris: I think it’s extremely hard going from youth ranks into the adults but I definitely feel like the last few races it’s all starting to come together. It’s taken a few years but it’s been a great experience and I’ve learnt a lot along the way. It’s definitely made me a better rider and I’m super excited for 2017!

Gatedrop: Have you got any plans for the 2017 season yet?

Luke Norris: The plans for 2017 are to do the EMX250 championship again, British MX2 Championship and also a few wildcard MX2 GP’s if we manage to get the funding. We’re still finalising a few bits but the plan is to ride Husqvarna’s and run our own privateer team again.

Luke Norris: A massive thanks to my Mum, Dad, Sister, Girlfriend and my incredible sponsors: Floortrak, GNS metal works, BRP Imports, Decade Europe, Ci Sport, CMS Financial, Premier Bikes, Simon at TWS, Aaron Rowe Fitness, MJM Electrical, SM Pro Wheels, Watson Decals and PG O’dell. Without all of these guys none of it would be possible.