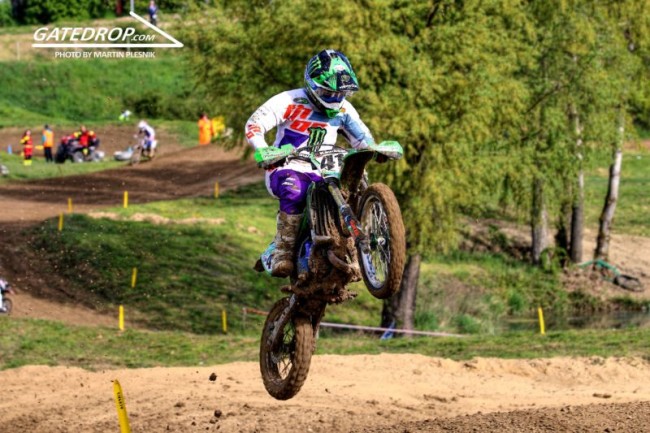 During the Loket GP the EMX85 kids were in action and one rider that impressed was Lewis Hall. It was great to see a young British rider impress during the weekend against some of the best on a 85cc machine.

Lewis didn’t get the best of starts on his Kawasaki but rode the wheels off his 85 and came back through the pack. During the first moto it started to rain and he was able to adjust to the wet, slippery track really well. He was able to pass top prospects in Tom Guyon and Alessandro Facca who are highly rated.

We decided to catch up with Lewis for a catch about his impressive weekend. Hopefully this can be the start of a good career for the young Brit.

Gatedrop: Good weekend for you… Can you talk me through your moto’s?

Lewis Hall: It was an awesome weekend for me! In qualifying I set out mid pack and just tried to put a few fast laps in and came out with a 12th.

In the first moto I had a real bad start due to a rider cutting me up but I pushed as hard as I could in the first few corners and came out around fifteenth. On the first lap I managed to pass a few people but about six laps in, the rain came and I pushed real hard and got up to sixth and I passed Guyon and Facca. I ended the race in fourth

In the second moto my start was very similar to the first race and came out the first few corners around twenty-fifth and I pushed like crazy the first few laps and got up into the top fifteen and ended the race in eighth.

Gatedrop: The track was quite wet in the first moto because of the rain, that seemed to suit you?

Lewis Hall: When the rain hit, it got real tough. A lot of riders lost their goggles but my 100% forcast lense kept me with great vision all race!

Gatedrop: It must have felt pretty good passing some of the top contenders including Guyon and Facca etc?

Lewis Hall: When I came up behind Guyon/Facca, I was really surprised (laughs). I raced Tom at the Coupe de l’avenir and he was a lot faster than me but all the hard work in the winter must have payed off!

Gatedrop: Also, to be the best Brit at the event must feel pretty good!

Lewis Hall: It’s nice being the best Brit there but it would be nice to see more riders come over!

Gatedrop: Do you have any plans for next year yet?

Lewis Hall: Next year I’m just going to be racing in England on a 250f, it’s a big bike to handle/race but I’m up for the challenge ahead.

Gatedrop: You have Jeff Perrett working with you, it must be pretty good working with him and how does he help you?

Lewis Hall: It’s great being able to work with Jeff, he first asked me to join the team at the end of 2013. It was a great opportunity and I took to the bike really well. I don’t think I would be where I am today without him.

Lewis would like to take this opportunity o thank every single person that’s made this experience possible, just everyone! Thanks guys!