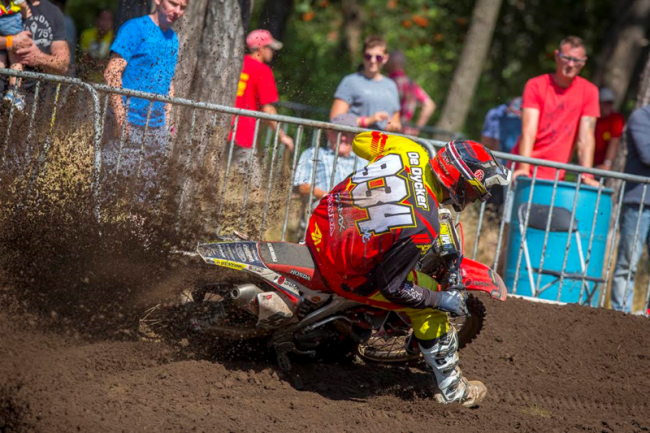 Folk wisdom can be hard to translate from one language to the other. But even when the Flemish saying ‘If our cat was a cow we could milk it under the stove’ sounds weird you probably get the point.  If means nothing. For Ken De Dycker, who entered the season in fighting form, things indeed could have panned out a lot different if it were not for his devastating femur-fracture. At last the popular 24MX Lucas Oil Honda rider is making his MXGP return this weekend in Assen.

Understandably excited to return to racing De Dycker has been quietly chipping away since he got back on the bike three weeks ago. So far he has two races under his belt. And his solid seventh place at the Belgian Championship in Orp-Le-Grand marked another step in the right direction. We sat down with the BFG ‘Big Friendly Giant’ to discuss the weekend ahead of him.

You must be relieved to finally be back to riding at the highest level!
Ken De Dycker: “Yes, I am! Rehab has been a bit of an emotional rollercoaster this time. I did all the physical work I was allowed, mentally I felt really strong and determined as well. But each time I went in with the surgeon for examination my return to the bike got postponed. During surgery in France they’d made the hole in the bone too big so it took much longer than anticipated for the bone to heal.”

Time seems to speed up once the MXGP season is in full swing. The delays must have been hard to swallow?
De Dycker:  “Yeah, for sure. I entered the season refreshed and hungry. Me and my trainer Joël Roelants put in a lot of effort last autumn and over the winter time. I was very motivated coming off my Motocross of Nations podium with Team Belgium in France. I had just joined a new team, we were all set to go. I felt very comfortable on the Honda and with the guys in the team… Everything was in place. Then when it takes such a long time before you can ride again you learn even more how much motocross means to you. For a moment it’s like, wait am I still a motocross rider? I have been in the sport since I was 5 years old you know! Of course I suffered injuries before but this was the longest ever I’ve been away from the bike.”

The first time you jumped back on the bike your speed impressed the staff on your team. Especially given the time you didn’t race and the seriousness of your injury.
De Dycker: “Luckily I didn’t forget how to ride! That’s positive, but you can only gradually rebuild your race fitness and speed. We’re taking it step by step.”

How do you feel going into the weekend at Assen?
De Dycker: “I feel good, happy to be back. We took a structured approach in this rebuilding process. Those two Belgian Champinship races at Keiheuvel and Orp-Le-Grand have been perfect to get my feet wet. Our aim was never to go for standout results there. That would be foolish because the level in these international races is pretty high as wel. I just wanted to get a feel for competition again. Because I did those  events after hard weeks of training I didn’t come into the races fully fresh either. Almost all of my bike time so far has been in the sand so that will definitely help me for Assen.”

What’s your goal this weekend?
De Dycker: “I’d like to get a good feeling from Saturday. When things go according to plan I want to see where I stand compared to the faster guys on Sunday. Technically I’m confident because I know how to rand in the sand, but Assen is very demanding physically. My biggest challenge will be to pace myself, not ‘blow’ myself up you know when you’re finding yourself struggling with arm pump straight away!”

So your last big race really was  the MXoN last September.
De Dycker: “Exactly, for me it’s as if the season starts now! That’s exciting and it makes me a bit nervous so it’s good to enter the weekend at least with some racing behind me. Of course, all of my competition is very much up to speed, their bikes are completely dialed in… The pace is really high in MXGP this season. Perhaps the only things that you have to keep in mind is that it’s been a long season for everyone so some riders might have passed their peak form.”

You ran the #934 number in the Belgian championship as a dedication to your friend and trainer Joël Roelants. How has it been to be working with him?
De Dycker: “Really good! It’s been like a breath of fresh air for me. So to change my approach and shake things up with my programme has worked out very well. Joël is gnarly, when it comes to physical preparation he was always very tough on himself. When something needs to be addressed or I need to change something he doesn’t hold any punches!  That’s what I like about him as well. He’s probably even more straight-up now than he was before his crash. We have a mutual respect and of course we were friends before. But first and foremost it’s about getting a job done, and doing it as good as we can.”

Your team mate Damon Graulus is getting more familiar with the 450 and he’s been showing good speed lately. Is that a surprise for you?
De Dycker: “No absolutely not. I had seen him ride in Italy this winter, even when he did an odd lap on the CRF450R he looked very much at ease.  We’ve been training together physically as well because we live pretty close. So already I knew what he’s capable of. (smiles) It seems he just made it to another level when I got back on the bike! You can see his confidence is growing and he’s keen to prove himself.”

Good luck with your comeback, see you in Holland.
De Dycker: “Thanks, I’m looking forward to discovering the Assen track and seeing all the fans again!”