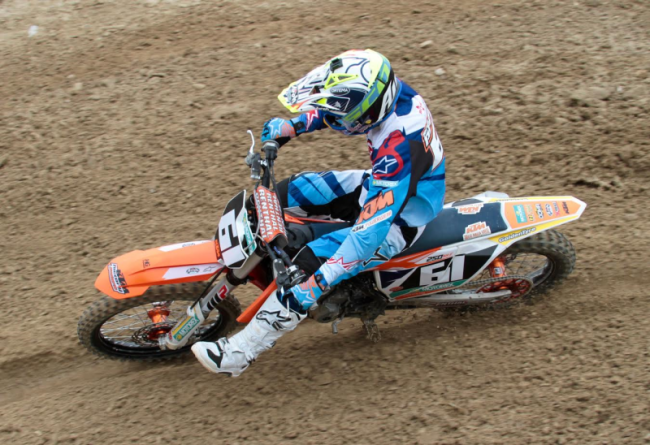 -First Race of 2016, after an intense preseason in America.
-This year will entail bigger challenges in the national, European and global scene.

Lommel (Belgium) .- Jorge just got back from the public library where he met with some classmates to finish some homework and get ready to take his final test in French the following day. In between, a break to talk about his passion, his life and his future: motocross. After last week’s incident in the circuit of Lommel, which worried his followers in social networks with the photo of his wounded neck, the conversation started with an update on his condition, “I am much better, surprisingly I recovered very fast and today I got on the bike, I was jumping and it did not bother me. Everything has been a shock, a silly fall because I found a lot of water in a rut and I lost control and fell, slipping my neck on the rope which marks the edge of the track. The crash was not hard, but I was hurt when the rope rashed my neck and I was scared when I saw blood.” Precisely this incident has brought up the old controversy about track safety: “It makes no sense ton mark a track with ropes, it is very dangerous and if it had happened while going at full speed, I could have even been killed. The FIM has shown interest on the issue and has encouraged riders and teams to be firm defending their security.”

The healing of the wound has forced him to rest for a few days, which brought up the Spanish championship , which he begins this weekend in Albaida, without having been able to train: “I have beenalmost two weeks off the bike, but I hope to endure because I was in good shape, I really want to compete again and I always love coming back to Spain. I like the atmosphere of the Championship of Spain, although I do not like the track maintenance. Also this year there are more riders, which is something very good for motocross and I like to improve overtaking.”

-Who do you see as favorite?
– “The favorite is once again my teammate Iker Larrañaga, but I always give it my best shot and, especially after the result in my only race with the 250 in Talavera last year and knowing that I have improved my fitness, I think I’ll be near the front inMX2. This year I would like to prove myself in the superfinal with the 450s, but It’s not going to be possible in every race. “

THE AMERICAN EXPERIENCE
In the renewal of his contract with Red Bull-KTM, the Galician rider requested to do their preseason in California with the official team of the Austrian brand in the United States. From November to January, Jorge was training motocross and supercross with American professionals: “It was a great experience, we worked hard, with a lot of discipline every day and with very good weather, which is important for training.”
-Did it go as expected?
– “In some ways yes, but sometimes I was surprised, for example supercross tracks are very small and narrow, although on television it seems otherwise. Also the level has impressed me, they are very fast, both amateurs and professionals have a higher level.”
-Was there anything you did not like?
– “The worst thing is that there are very few riders on the track and very little atmosphere in the street, you do not see anyone, there are only cars. Now if you ask me to choose I’d say maybe I like American supercross a little more, but I also really like the atmosphere of the World Championship and the tracks in Europe. Oh, and I like in & out burger (laughs).”
-Are the tracks so different?
– “They are very fast, hard and with big jumps. I liked the tracks at Pala and Competitive Edge, It has helped me to get more speed and deal better with hard-packed terrain.”
-And how about supercross?
– “It is very difficult at first, you will drag along the circuit and have no flow, but the more you ride the more you like it, you start to bond with it and enjoy and each day go faster. It is also true that it is more dangerous.”
-Were you impressed by the pros?
– “I was with many, all of KTM, Geico honda and Broc Tickle They are very fast and I learned a lot from them. Of course, when we trained starts, they were not far from me. I’m good because it is only about releasing the clutch and speed and not so much about experience. I also loved the atmosphere in my team and their professionalism, they looked after me a lot, I had a very good mechanic and great person, Joel, and worked hard on the bike with the White Power suspensions, which is vital for supercross.”
-Do you see yourself soon in the United States?
– “I do not know, maybe yes, but it remains to be seen when we return at the end of this season and track times will tell ….”

61 to 32
Full of energy after this intense preseason riding in California, Prado is already built into his routine in Belgium which reconciles his studies with the team training, now led by former World Champion Joel Smets. Jorge jumped into a different category this year, because after being European Champion in the 125 class,he moves up to the 250, to compete in the European and World Championships. Just turned fifteen, some say he will be one of the favorites: “I do not know what will happen because the level is very high with many strong riders such as the champion Kouwenberg, Ostlund and all those who come from 125 like Conrad, Renaux or Natzke. I do not consider myself as a favorite, but last year I didn’t either and we all know what happened. All I do know is that I will fight hard and I have improved a lot on hard terrain and I hope to stay fast in the sand… we’ll see.”

-You are not running number 61 this year. Why is that?
– “It’s a shame, but the Danish rider Olsen runs it in this category and has priority over me so although we have tried, have to run the 32. It’s also OK, I’ve seen it on Justin Hill’s bike, and it looked good. The trouble is that if I have a good season then I will hesitate between the 32 and the “SixT1”.

-It is also possible that you will make yourWorld MX2 debut, right?
-“If all goes well, at the end of the season I could race some MX2 motos to keep competing, which gets me excited and I would love to have a picture of me in front of Jeffrey Herlings (laughs). No, but seriously, I still can’t make any predictions, of course I’d like to be in the top ten, but we have to check on the level.”

In recent months, Jorge has grown taller and at 1.70, he is tall enough for his new bike: “Now the four stroke is perfect for me, just have to gain more strength and not grow much more, you do not want to be a lanky rider. “We could go on all night talking about motocross with that curious mix of innocent child and an expert pilot Jorge still holds. After a goosd night’s sleep, tomorrow, Jorge the kid will go to school and then fly to Valencia, because on Sunday, Prado, the rider, is going racing. Watch out for 32.