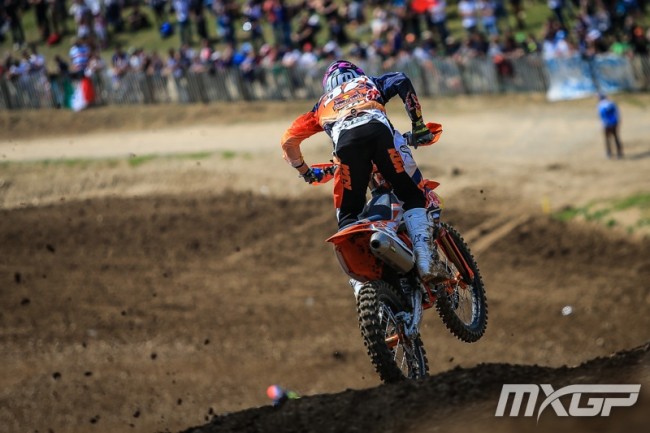 There is no doubt about it, Jorge Prado is a tremendous young talent who is going to go on and do big things in his career. Last year he won the EMX125 championship as a rookie which is not an easy thing to do. The switch from the 85 to a 125 machine is a big jump and many riders need a full year to adapt. However, the talented Spaniard needed only one winter to get up to speed and was able to win the EMX125 championship in his first attempt at trying.

The future is very bright for Jorge Prado, he has made no secret about wanting to go to America to compete in Supercross. He spent a lot of his winter in America getting used to Supercross.

We caught up with him to talk about his impressive season and what the future holds for the talented Spaniard.

Gatedrop: We are here at the EMX250 round at Matterley Basin, can you talk me through your moto’s?

Jorge Prado:  Yeah, it was a really good day actually.  The first moto was pretty good, I took the holeshot and then made some really good laps.  I finished fourth with a pretty good rhythm. In the second moto I was second at the start and I just couldn’t follow. I’m not sure where I finished (Jorge finished thirteenth in moto two) but I will train hard and will be good in Mantova.

Gatedrop: In the second half of the moto you seem to fade, did you have a problem?

Jorge Prado:  No, I just couldn’t ride like I wanted and couldn’t find the grip.

Gatedrop: You are so good out of the gate, the starts seem to be helping you out a lot!

Jorge Prado:  Yeah, the starts help me a lot, I think it’s the key of the race.

Gatedrop: You moved up from the EMX125 class, what’s the level like in the EMX250 championship?

Jorge Prado:  Yeah, in the 250 class the level is really high. Everyone is going on the gas pretty good. Physically everyone is pretty good and I think it’s a really tough class.

Gatedrop: Before the season you got injured and had to miss the first round. How disappointing was that?

Jorge Prado:  Yeah, it meant that I couldn’t ride the first round in Valkenswaard.  But I came back in Latvia just two weeks after I started to ride back on the bike again.  I started not so good but then you can see the progress like every race, it was going better and better.  For the championship it was not so good but I think now I am riding pretty good.

Gatedrop: Obviously, you’re a rookie in the EMX250 class, what did you expect coming into the season?

Jorge Prado:  Not so much because everyone is riding really fast and I think that top ten for this year is really good.

Gatedrop: Before this season you spent a lot of time in America, how was that for you?

Jorge Prado:  Yeah, it was amazing. It was like a dream, it was really nice and I enjoyed it.

Jorge Prado:  Last year, I was working with Stefan, a ten times world champion, he knows a little bit about motocross (laughs). Now, I am working with Joel Smets, one of the best in the world. It’s nice to have him next to me because after the race I improve those mistakes that I make in the race.

Gatedrop: There are a few sand races coming up, you must be excited for those and to try and get back on the podium?

Jorge Prado:  Yeah, I really love sand so I hope I can make good races at the sand rounds.

Gatedrop: This winter you will have another off-season on the 250 so you will be even stronger next year to go for the title or we might even see you in MX2?

Jorge Prado:  Yeah, at the moment we don’t know. Maybe America, maybe Europe.  If I ride in Europe then I think I will ride in the MX2 class so we will see.