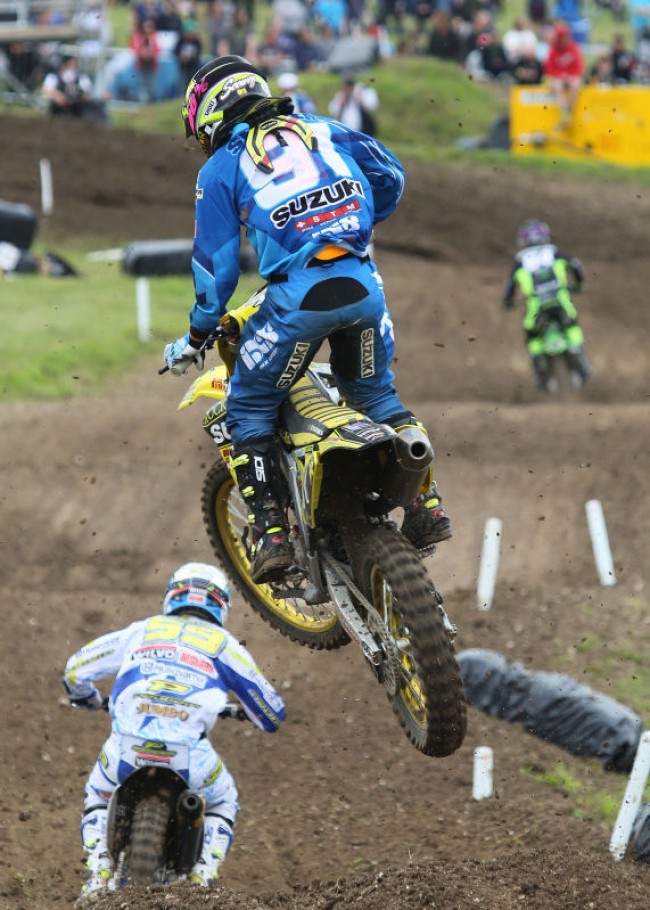 In just his second full season in MX2, Jeremy Seewer has stepped it up this season and has already got two overall podiums in the class. Jeremy only turned a professional motocross rider half wasy through last year as he was studying before. That means before this season was his first off-season as a professional that makes a big difference!

Rockstar Energy Suzuki have got only the one rider in MX2 as Jeremy is the lone rider in the class and he is paying back the faith showed by the team this season with some great results. I am sure he can go from strength to strength and keep getting more podiums. Jeremy is currently seventh in the standings which I am sure he will be able to build on.

The season looks bright for the talent Swiss man, we caught up with him for a chat about his season so far.

Gatedrop: Your second overall podium this year, you must be happy with how the season is going?

Jeremy Seewer: Yes, of course to be on the podium is great. My riding goes pretty well so far in this season. I struggled with some bad luck during some GP’s but yes, overall I’m happy with how it is going so far.

Gatedrop: Just how difficult was the track at Maggiora with the rain?

Jeremy Seewer: It was really difficult, because there was only one line becoming dry and as soon as you missed this line you got stuck in the mud, especially the first race. The bike was getting unbelievable heavy and that made it even worse and underneath it was still pretty hard pack so it became slippery like hell too.

Gatedrop: Last week at the ADAC you beat Glenn twice on your 250, that must have given you the confidence to do better at the GP’s?

Jeremy Seewer: Yeah last weekend I was really going for it. I mean I felt so good on that track which was very technical and good for the 250. I had a great fight with Glenn and both of us were fast out there. But that is true, things like this gives you confidence also in the GP’s.

Gatedrop: It wasn’t too long ago you were racing EMX250, how’s racing MX2 compare to racing the EMX250 championship?

Jeremy Seewer: I mean in the European there are a lot of young kids. There it is all about learning and trying to get better, a lot of mistakes happen there. Like in the GP’s you have to be there all the time. There is no time to make mistakes anymore, otherwise you are going to pay for it twice as much. Yeah, of course the level in MX2 is a lot higher in the top five than in the Europeans.

Gatedrop: Before this season it would have been your first off season being as a pro as you were in education before, did you change much preparing for the season and what?

Jeremy Seewer: Yes it changed completely, I have so much more time than what I had before. I really could do all I wanted to prepare as good as possible for the season. Like before the focus was on school and stuff but this has changed now. I worked a lot more on my fitness and I was riding my bike twice as much.

Gatedrop: For those people that don’t know, what was it you were studying and what did you get your qualification in?

Jeremy Seewer: I was studying “polymechanic” that is what it’s called in Switzerland. It’s all about making programs for high tech CNC drilling and milling machines.

Gatedrop: Does being a professional rider make it easier to run at the front?

Jeremy Seewer: It doesn’t mean straight away that it is easier to be up front, first of all you need to be more focused by yourself to use the time you have for training as good as you can. By just being a pro nothing changes, I mean you have to practice by yourself and have a goal, a motivation and for sure the fun is still most important. But yeah if you are good enough to manage those thing it makes it easier…

Gatedrop: Do you think the level is higher in MX2 this year than what it was last year?

Jeremy Seewer: That is a difficult question but I think all the guys out there are getting closer to Jeffrey and yeah we are on a high level. But the level in the GP’s is always high I think..

Gatedrop: Do you feel more pressure being the only MX2 rider for the Rockstar Energy Suzuki rider in MX2?

Jeremy Seewer: No, actually not, for me this is only positive. Because The main focus from the team is on me and they don’t need to care about someone else. Also, yeah if you have a team mate, the first guy you want to beat is your team mate, that means there is always pressure as well.

Gatedrop: What would you say is your biggest achievement in your career so far?

Jeremy Seewer: That is a good question, but to finish second in the Junior World Champion on a 125 was a really great race… But I think those two podiums in MX2 which I have did this year, it feels so good and it was always a big goal from me to race in the front positions in the MX2 world championship!