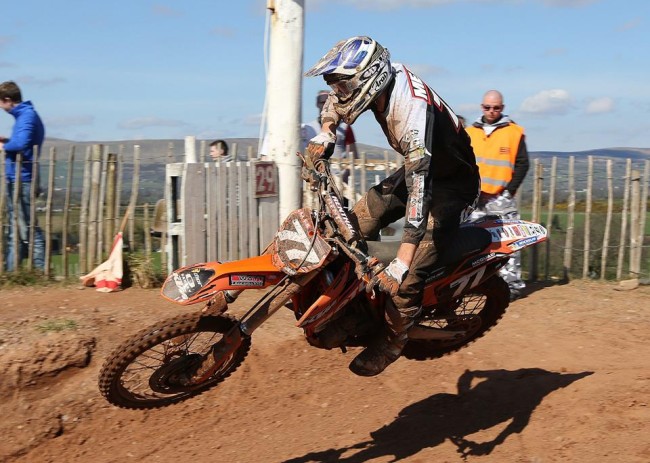 Jason Meara is a young man in a hurry. The 17 year-old from Loughbrickland is Ireland’s latest hope for GP success and he begins his journey in two weeks time in the ultra-competitive EMX2 class at Arco Di Trento in Italy.

It will be Meara’s first race in a European series of any kind and with 99 other competitors with the same aspirations to make it to MX2 GPs, it will not be easy. But Meara’s determination has never been in question, and coming from behind to score good points in the British MX2 Championship in the first two rounds in 2015 shows his resolve and mental strength.

Over the Easter weekend Meara also showed his fitness is on point too. After racing three 20 minute motos in the British championship, he travelled back to Ireland overnight to race three more 20 minutes motos on Easter Monday  at Desertmatin for an Ulster championship, where he duly won the MX2 class!

Meara is intimidated by no-one and gives everything he has in every race he enters but at Arco Di Trento it will be a whole new experience for him – and he can’t wait to get going and see where he stands!

Gatedrop: You switched from Kawasaki to KTM in the winter, what was the reason behind that?

Jason Meara: Well I liked the Kawasaki but the KTM is more power from standard so I thought it would be better having the KTM for more power from the word go, it takes less money to get the bike to go and you can get out of the gate better which was a problem for me last year.

Gatedrop: What about the handling?

Jason Meara: We have the KTM handling well now, Phillip McLaughlin  did the suspension and he has done a great job with it, so I am happy with the bike the way it is and we are looking forward to a great season.

Gatedrop: You spent some time in Europe over the winter, was that an eye-opening experience for you?

Jason Meara: Yeah when I first rode the sand over there I was like a fish out of water, I was struggling a lot! But I just kept going and improved a lot in my sand riding which was a big downfall last year, I am feeling good.

Gatedrop: Did you get riding with many GP guys out there?

Jason Meara: There wasn’t too many but there were guys preparing for beach races which was good so I could try and get a tow in behind people and see their different lines. The lines they use is completely different and I learned a lot from even just watching them. I spent a lot of time in Dunkirk so I am looking forward to sand races now, because there won’t be many tracks worse than it! Most of the British championship races are sand this year and my goal is to get into the top ten or better.

Gatedrop: The first two rounds you’ve scored some good points but you seem to be coming from the back of the pack a lot.

Jason Meara: Qualifying has been a big downfall for me, I just can’t get a fast lap in qualifying so I am going to have to work on it. I need to get a good gate, I know the bike is good enough to get out of the gate so I am happy enough with that. If I can get a start, who knows…

Gatedrop: You are able to come through the pack pretty good, so your race pace is clearly decent!

Jason Meara: Yeah my race pace is really good, it is good enough for top ten but we are just working on qualifying at the minute. I am just making silly mistakes and I need to relax a bit more but it’s easier said than done. 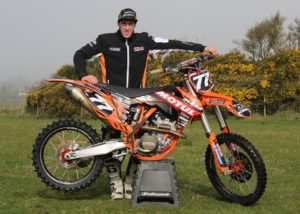 Gatedrop: You are racing guys like Max Anstie who is doing well in GPs and Adam Sterry in the British Championship, who is one of the top guys from EMX2, what are your thoughts on Adam’s progress and seeing the level you need to be at for the EMX2?

Jason Meara: Yeah Sterry has really stepped it up this year but I will just go into the Europeans open-minded. It is completely new to me, I have never done anything like that before so we will just see how it goes.

Gatedrop: What are you expectations?

Jason Meara: I don’t have a clue! I don’t know how fast they are and I don’t even know who half of them are! I’m going in just to see how it goes, I am looking forward to Arco and also Valkenswaard because my sand riding has got a lot better this year. So we will see how it goes.

Gatedrop: Going back to the British championship, with six rounds left have you a goal of where you want to finish in the series?

Jason Meara: No we aren’t thinking about championships we are just trying to break through to the top ten and hang in with them boys and bring my speed on.