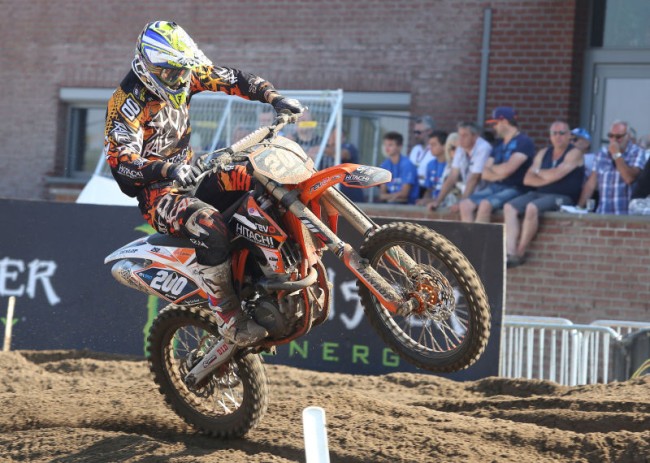 It was only four years ago when James Dunn was competing in the EMX125 championship and battling with riders such as Tim Gajser, Jeremy Seewer and Damon Graulus. James finsihed sixth in the series and was forced to miss the last round due to an injury. The future was looking very bright for James who is clearly a very talented rider.

In 2013, Hitachi Revo KTM UK gave James a chance to ride the MX2 world championship, that was a learning year for him – James found out how tough it was to be a GP rider but there was no pressure on him to perform and he picked up some injuries that hindered him. His best moto was a 15th which was encouraging.

Unfortunately at the beginning of the 2014 season he picked up a serious injury which has hindered his progress. Hitachi Revo KTM UK stuck behind him though and he made his return to racing this year. He looked impressive in Assen and that races seems to have given him the confidence he needs.

At the last round of the British Championship he finished an impressive sixth overall, when you think about the bike time he has missed then that is a brilliant result. James will get a full pre season of training and riding in before the 2016 season so he could surprise a lot of people next year!

We sat down with James to talk about his injury and what it’s like to be back at the races!

Gatedrop: A few seasons ago you had a serious injury. Can you break down the injury and the recovery?

James Dunn: Yes, at the beginning of 2014 I dislocated my knee causing serious artery damage which stopped the blood flow to my foot, also rupturing 3 ligaments and having to have donor ligaments put in to replace them. 3 operations and countless hours of physio with Harris & Ross up in Manchester through out 2014 and the beginning of 2015 meant I was finally able to get back on the bike in May. Since then my goals to get back to the level of racing I know I am capable of have been just as high.

Gatedrop: What did it feel like the first time you got back on the bike again?

James Dunn: After such a long time off I was very nervous! Although on the way to pick up a bike I was so excited and couldn’t wait to get riding again. It was crazy really, as soon I started riding it felt like I had never been off the bike!

Gatedrop: You had a brilliant weekend at FatCat. You must be happy with your weekend?

James Dunn: Fatcats was a much better weekend for me, I finally put together 3 solid races and felt comfortable running up front again. The team Hitachi Revo KTM UK also helped me out with a new bike which was awesome and it gave me a lot more confidence.

Gatedrop: I saw you at assen and was impressed.. Did that race give you the confidence and do you think we are seeing the old James dunn coming back?

James Dunn: I defiantly made a big step forward at Assen, things came together and I felt much better on the bike all weekend. I still feel like I have a lot more to come, and have learnt not to run before I can walk… I’m just trying to keep building week in week out and have fun with my riding.

Gatedrop: Assen was pretty unique.. what was your opinion on the track and facility?

James Dunn: Assen was an awesome weekend and I was honoured to be apart of such event. It works really well having the track in front of a grandstand creating a better atmosphere and better/easier viewing for the crowd. Back in 2013 the GP’s had a similar event in Germany which was also caused exciting racing and a great atmosphere. I hope they have more races like these in the future.

Gatedrop: You used to battle with Gajser in EMX125, is it frustrating seeing how far he has came and you haven’t been able to due to the injury?

James Dunn: Tim is a great rider and deserves everything he’s achieved. Of course I could look back and say I would be up there with him if I hadn’t of had the injuries I did. However this is the path I’ve been delt and I’m trying my best with what I have to get back to where I feel I should be!

Gatedrop: Does FatCat help get you motivated for 2016?

James Dunn: It’s always good to finish the season off on a positive result and it defiantly helps me look forward to next year. Although I do plan to do a lot of racing this winter to catch up on what I’ve missed!

Gatedrop:  With a full pre season you must feel you can be competitive next year since you missed a lot of bike time coming into this season…

James Dunn: Obviously missing any time off the bike during the year makes it difficult to jump back into racing. But yes, this winter I plan to catch up on a lot of riding and come out fast at round 1 next year.

Gatedrop: Would you like to have another chance race mx2 world championship again?

James Dunn: Definitely, my goal has always been to race in the world championship. So if I got another opportunity I would jump at the chance to take it!

Gatedrop: what are your plans for the 2016 season?

James Dunn: I’m still unsure on 2016 yet, I have a lot of ideas up in the air which I’m just trying to nail down. But firstly I plan to race the German Supercross and the Arenacross here in the UK during the winter.

James Dunn: I can’t thank everyone who’s helped me get back to this point enough. I wouldn’t be where I am now if it wasn’t for my Mum, Dad and Grandparents, their endless support is amazing. Also Darren Roberts, Carl Dickson, Laura Robson and everyone at Harris&Ross Physiotherapy have been a huge part of my recovery from injury and getting me back on the bike. Also the team Hitachi Revo KTM UK have been very supportive over the past years giving me these great opportunities to go racing.