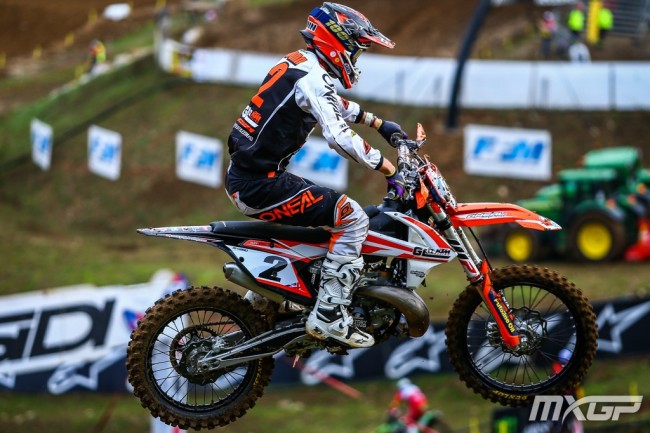 James Dunn had a brilliant end to the season by winning the final round of the EMX300 and the EMX250 rounds and showed that despite some big injuries, the still young and talented Brit can still cut it at international level.

We caught up with Dunn to discuss his brilliant end to the year after having no outdoor ride to start the season.

Gatedrop: James, you’re just after having a superb weekend by winning the final round of the EMX250 series. You even made a bit of history by being the first ever two stroke overall winner in the class, how’s it feel?

James Dunn:  Yeah, obviously it was an amazing feeling. I didn’t expect really to win, I was just going there just to see how we got on against the top four strokes. It’s obviously great to win the overall, it’s amazing. It was very special to me especially after the hard years with injuries and stuff so get a win there was very good. To become the first ever two stroke is even more special.

Gatedrop: In the first moto when you were in second you started to actually catch Charboneau, you must have been happy with your pace in that one?

James Dunn: Yeah, for sure. I had a good start and got the holeshot in the first one. It just took me a few laps to get into the moto and get settled down. Midway through the race I started catching and I got quite close but that’s when I started making some mistakes. I was still obviously really happy with second. I had some good speed there in the first race.

Gatedrop: Then in the second moto you made the fuel cap error which meant you lost a lot of time! Did that almost take the pressure off you? I’m sure at that stage you thought the overall was well and truly gone.

James Dunn: Yeah, after being sat on the start line for a while there I definitely thought it was all over so I was just doing that first almost thinking it was never going to happen. Suddenly after doing a few laps and being sixteenth already, I was getting pit boarded that I was moving up through the pack quite quickly. It kept me into it so to then work my way into third was pretty special as it gave me the overall win.

Gatedrop: Obviously, you had some good races in the EMX125 and things like that. How would the win in France rank in terms of your career so far?

James Dunn: I think it’s one of the best championship races to be doing in the world. To actually win the overall was definitely one of my best races ever I’ve ever done so far. I’ve had other races which are special for different reasons but to get this win is probably one of the biggest races I’ve won. It’s definitely up there in my career so far.

Gatedrop:  Just going back to the very start of the year, you signed a deal with the I-Fly JK Yamaha deal to race the MX2 World Championship but then that fell through. What happened there?

James Dunn:  Yeah, I was in negotiations with I-Fly (JK Yamaha) at the end of last year trying to get a deal sorted. We got to the start of the year and the deal never got finalized.  Unfortunately, we couldn’t start the season with them so it was annoying for both sides as we both wanted to go racing and do the GP’s this year.  That didn’t work out but I got a great opportunity with the GL12 KTM team to do these two stroke races so for me it has worked out well in the end but for it to not work out with the I-Fly JK Yamaha team was a shame.

Gatedrop: After the Yamaha deal you had the opportunity to race the British AX series with the MVR-D Husqvarna team. How did that series go for you and will you do it again in 2018?

James Dunn:  Yeah, of course. The guys at MVR-D then got me in last minute to ride one of their bikes in the Arenacross tour which was great fun. I really enjoyed racing the Arenacross, it’s something I’ve always liked doing since I was a little kid. That was really good of them to let me ride their bike and I had a couple of good races there. I’m looking forward to the 2018 series, I just need to finalize a ride for the series next year but we are in the process of doing that. Hopefully, I’ll be there at the races and I’m also looking at doing other Arenacross races in Germany or Belgium or anywhere I can really.

Gatedrop: I remember talking to you at Belfast Arenacross last year and you were hoping to race the outdoors with the MVR-D team too but shortly after that you announced you were taking a break from the sport. At the time was that a difficult decision to make?

James Dunn:  Obviously riding with the MVR-D guys at the Arenacross, there was a brief talk of maybe carrying on for the rest of the season. For me at the time, once it got to the last round of the Arenacross, my physical condition wasn’t great and up to racing outdoors. We decided to take some time away from racing and get my personal health 100% again which to me at the time was a lot more important than racing or anything else. I’m glad that I had that time away, it wasn’t too long but it was enough time just to get myself regrouped and get myself sorted. Half way through the year I started with the GL12 team and I’ve turned everything around again.

Gatedrop:  As you said, you didn’t take too long away before you got the opportunely with the GL12 KTM team.  How did all that come about and did you need much convincing or did you go for it as soon as you got the chance?

James Dunn:  No, I obviously had some time off and I made sure I was right before I started racing. I was still unprepared when I did start racing, my first few rounds of the EMX300 and the British that I did were a bit off with the speed. The whole deal with the GL12 guys was just for fun and no pressure deal. It’s worked out for me considering the situation I was in.

Gatedrop:  You’ve been competing in the EMX300 and British two stroke championship, can you just summarize how they’ve been going for you?

James Dunn: Yeah, I just missed Russia from when I started with the team. It was quite last minute to get me there. I just jumped on the bike two weeks before Germany and done that for them. I missed a round but still ended up fifth in the championship so it was good to still do okay in the series. Racing in the British Two Stroke Championship, I only did three of them so wasn’t in championship contention. But for the guys to get me on the bike last minute and send me to these races, I really appreciate everything that Bob and everyone at the team has done for me this year. Without their support I wouldn’t have been doing what I’ve been doing this season or even racing again maybe so I’ve got to really thank them for everything.

Gatedrop: It only took you a few rounds to get back up to speed again, where you surprised it maybe didn’t take you longer to be running at the front?

James Dunn: Yeah, during the first few rounds I was way off the pace which I expected. I did try to knuckle down and put some work in because even though I was only back on the bike a short while I still don’t like not doing well. I had to put in a lot of work at the start and it definitely improved quickly. By the time I done a couple of EMX300 rounds I was on the podium straight away so that was a big confidence booster at the time to be able to get back up to speed at the time.

Gatedrop: What’s your thoughts on the British Two Stroke series? It’s a new class this year – would you like to see more rounds in 2018?

James Dunn: It’s nice to see the British Two Stroke Championship coming back a little bit. All over the world I think it’s slowly coming back. To increase the rounds in the series next year would definitely be good and maybe if they could try and get some more riders across from Europe or something that ride two strokes, that’d be good for the championship as well as the whole series.

Gatedrop: You’re a good four stroke rider but you’ve had some of your best results on the two stroke. Would you say you’re a better two stroke rider and what would you put that down too?

James Dunn:  Yeah, I’ve had good results on both bikes but from this year and the 125 in the past I’ve had some good results. I’m not sure if I’m a better rider on the two stroke or it’s just the situations that I’ve had the results. I do like riding the two stroke so it helps when you enjoy riding it. At the times I’ve been riding four strokes it’s been GP’s and stuff which is a lot harder. A lot of learning was going on those years so it’s the time and place maybe on the different bikes.

Gatedrop: As you mentioned earlier, you made the decision to step away from the sport due to the help. Has that now been put in the past or will you re-emulate your options at the end of the year?

James Dunn: I haven’t decided on what I’m doing next year yet. There’s been talk of me maybe doing on a two stroke or what not. I’m not 100% sure on what I will be doing but at the moment I feel really good coming off my last four or five races that I’ve done where I’ve been first or second so to carry this momentum onto the Arenacross races then this winter. I will always be riding a bike somewhere so we will see what happens next year but nothing is confirmed yet.

James Dunn: I’m not too sure. Obviously after last weekend it’s definitely put a big question on whether I could do as much of both championships as possible but I obviously have to favour one over the other. I’m not sure whether I’ll jump on a four stroke from a two stroke or just do a mixture of both championships but on the two stroke. It’s another thing I still haven’t really decided on exactly what I’m doing championship wise next year. These questions I still need to answer myself and then we’ll figure out what the priority will be.