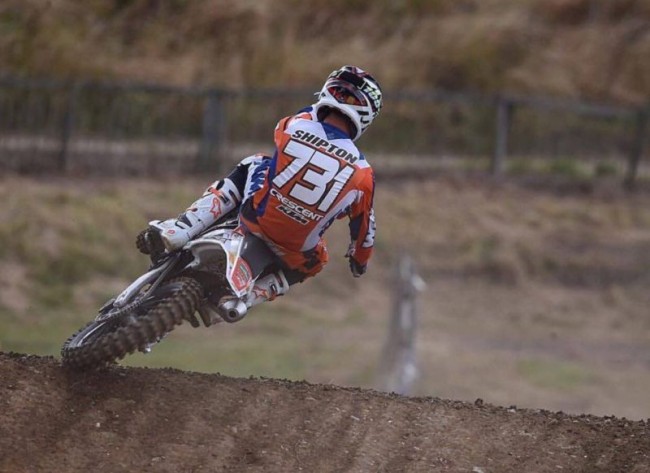 Everyone year there is always at least one rider that tends to surprise us and has a breakthrough season. This year, Jake Shipton having started the season slowly is starting to build momentum as the season is drawing a close.

Jake is starting to win races in the MX National and British Masters Championship which is pleasing to see. It’s always good to see  privateer performing well and run with the big boys.

We decided to catch up with Jake and discuss his season to date, 2017 could be exciting for Jake if he continues to build on his speed.

Gatedrop: You won the fifth round of the MX Nationals, it was a good day for you! Can you talk me through it?

Jake Shipton: Yeah was really cool, it was hard pack and I’ve grown up riding that stuff so felt confident as we’ve been in sand all year, the closest sand to me is fatcat so a good 5 hours away. Race one gated okay, made some passes around EBB, Ando and Irwin was leading. I knew he was injured and got passed as soon as I could. I got a gap of around 15 seconds and just held it there until the finish. Race 2 Ando got the gate, I followed for around 2 laps, I felt faster and made a strong pass and just put clean laps in to pull a good gap again around the same distance.

Gatedrop: You also recently won the Ken Hall motocross from some top riders, you must be pumped about that?

Jake Shipton: Going into kenhall I felt good and knew Nicholls and Leok were going to be there, dale my best came with me and jokingly I said, “Tops boys are going to get it today”. I was happy with a third or something like that but I knew I could run quite well there as the tracks awesome. Race 1 came and I was around fourth, got passed Lenoir and Leok, I was behind Nicholls who wasn’t pulling a lot, he got like a 8 second gap and I started to close it back which didn’t feel right (laughts). Then he stalled it which left me out front and just put in some good laps and he wasn’t closing fast at all. Then the red flag came out 20-25 minutes in which left me with the win. Race 2 came, I got the holeshot (but not the holeshot award for some reason) and led from start to finish with Lenoir and leok right on me but got a cap of around 4 seconds which was enough to relax and hold on to the finish line and bring home some money for once. Really enjoyed the event and hopefully they can keep it going.

Gatedrop: You also showed some good speed at the British championship at Preston Docks, you must be happy that you’re improving?

Jake Shipton: Yeah Preston was good, feeling confident from the win the previous weekend but was tough as you know the top guys are there. Qualified 8th which was cool, starting to feel good in the sand which is nice. Race one came and gated okay just outside the top 10 made some passes and got behind Ando and Lenoir in 6th and just hung on the back of them to finish 6th. It’s more a confidence thing, I see them under the big rigs and stuff and felt like I don’t deserve to be there, but then I thought… Hang on, it’s my money, my time and effort I deserve it more than anyone. That’s what’s made me improve I think. It is about believing in myself and the programme I’ve made for myself like fitting in work, bike maintenance and training.

Gatedrop: You’re a privateer, just how hard is it being a privateer and having to compete with much better bikes?

Jake Shipton: I wouldn’t say it’s so much the bikes, it’s more the structure the teams offer etc… My bike this year is stock with Ohlins and a slip on can. The new Ktm is solid. It’s just harder keeping everything greased as it takes time and obviously set up and stuff as they also have good people around them but I like what I’m doing and the guys at FTR suspension have me covered in that department on race day.

Gatedrop: The speed seems better now than at the start of the season, have you changed something that has helped you?

Jake Shipton: I think it’s just my attitude and I came into the season with a torn MCL in my knee which I kept quiet so the first half the season I was taping it up and taking pain killers before every moto just trying to get as many point as I could. I just try and improve every week whether it be on the track, in the gym or out cycling. I’m enjoying and not making it miserable. If I don’t feel like cycling I won’t, I’ll train another way, if it’s a nice day and don’t want to be in the gym I’ll go running up the woods with my dog and make it fun. It sounds cliché but I’m making it my lifestyle.

Gatedrop: With your speed improving do you think you have a chance of a good ride for 2017?

Jake Shipton: I have never had a team ride, I had a couple of people help us with bikes etc but never had a full ride. I guess I don’t know, I hopefully have shown a lot of what I can do on my own, but a lot of today is whether you have money etc… I’m just going to try and do the best with what I’ve got with good people around me and see what happens.

Gatedrop: Would you say you’re currently riding the best of your career?

Jake Shipton: I would say so yes, but I think I have a long way to where I want to be, I’m realistic so I know I won’t be world champion but if I could finish top 5 or even top 3 in the British championship in the next couple of years with good people helping I would be pumped. Possible a few GP rides also (laughs).

Gatedrop: The British Championship format this year changed, what’s your opinion on the format change?

Jake Shipton: I think it’s a lot better, especially for me… trying to wash and prep the bike 3-4 times a days is way too much when we had three 20 minutes (laughs). I like it, it’s still not 30mins plus 2 but it tests endurance as well which is good and also not too long for the fans to get bored and the racing seems to be for the full race.

Gatedrop: You just picked up an injury at the last round of the MX Nationals, can you tell me about the full extent of the injury?

Jake Shipton: The weekend just gone for the last round of the mx nationals I qualified second, just .3 off the lead. Was confident I could have gone 1-1 on the day as I was feeling so good with the bike and enjoyed sand which was a first… I gated in 4th and was pushing hard on the first lap and someone in front, no names, was braking everywhere so I changed my line to make a pass, the other rider made a mistake and hit my wheel whilst I was just leaning sending me to the ground, then a few bikes landed right on my head and shoulder which caused the injury. I’m really annoyed but I’m more annoyed about my new Helmet RFX and Bell motorsports just gave me which is now cracked (laughs). I’ll try everything to get it ready for Foxhills in two weeks’ time for the last round of the British Championship.

Gatedrop: it’s hard for anyone to beat the GP guys (Simpson, Searle and Nicholls) regularly, what do you think you guys need to do to close the gap or even beat them more regularly?

Jake Shipton: For me personally the gap would be closed a bit if we had more hard pack… (laughs). No, but those guys are on another level as you can see from the racing this year. They are solid week in week out. I try and watch those guys as much as I can and learn. I’ve ride with Tommy a few times this year, he’s chased me down and it’s just having bike time with him which has helped. But I’m just sticking to what I’m doing now and hopefully we’re going to be closer next year and build on what I have.

Gatedrop: What goals will you set yourself for the 2017 season now that you know you can run at the front?

Jake Shipton: Next year we are speaking to a few teams which is cool, so with the right guys around me during the week I think there should be no excuse why I can’t finish top 6 in the British championship or even higher. Like I said I’m realistic so somewhere around there would be awesome and you never know even higher on the harder ground. But I’ll be working my butt off to be a solid guy in the sand also.

Jake Shipton: Yes for sure, firstly Paul Denning from crescent motorcycles for believing in me when I went up to him when I was chubby saying I wanted to give this motocross thing a good go, he helped with a trainer, bikes everything really, KTM UK, watches of distinction, bell helmets UK, motorex, Pirelli, rental, FTR suspension, GMX, talon wheels, tusbaki chains, acerbis, decade Europe, 100%, Lee at ASA scaffolding, LR designs, Paul Iwrin RFX. My parents for all the years supporting me and struggles they went through and still help me when they can, my Gramps especially. My girlfriend, Chelsea for putting up with the times I’m away, and dale boy one of my best friends and the guy that helps me during the week with the bikes and coffee dates.