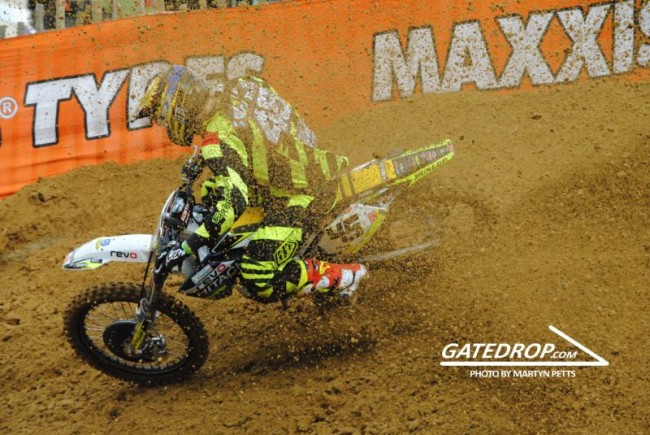 It’s fair to say that Jake Nicholls has had a rotten few years due to bad luck and injuries. However, he is looking to put all that behind him with a strong 2016 season on his Revo Hitachi Husqvarna. A team he started his journey back when he entered in the MX2.

So far the 2016 season has been very promising for Jake, he sits fifth in the British championship and has been knocking on the door for top ten results in MXGP. It impressively hasn’t took him too long to get his speed back and he gets stronger with every race.

We decided to have a chat with Jake to get his thoughts on his season so far.

Gatedrop: Two good races from you at Hawkstone, can you talk me through your moto’s? You must be disappointed to lose second in both the moto’s in the closing stages?

Jake Nicholls: Yea it was a good day for me, I was quietly confident coming into the day as I’ve rode quite well the last couple weeks and I like the track here too, although it did catch me out a bit with the conditions, it was like a real sand track instead of being quite hard underneath how Hawkstone normally is in the summer. I was a bit wound up about losing 2nd in the first race as it was the penultimate corner and a lapper was involved, although he couldn’t do anything as he was sandwiched. the 2nd race, honestly I was miffed to lose 2nd with 3 laps to go but also pleased with two 3rd’s and 3rd overall.

Gatedrop: In the first moto you had a big battle with Searle, what happened between you and the backmarker at the end of the moto?

Jake Nicholls: He passed me coming out of the bomb hole so I went for a big outside pass in the following right hander, we caught two lapper’s up in the process and tommy revved his bike which made the lapper panic and shoot over there berm, which meant he went straight into me while I was pinned in 3rd and we both went down. It’s just one of those things, I was wound up with him at the time, but I spoke to him before 2nd race and cleared the air.

Gatedrop: It has been a rotten few years plagued with injuries, just how tough have the last few years been for you mentally and physically?

Jake Nicholls: Obviously with my finger it was far more mental then physical as I lost half a year of racing due to a little finger, which sounds crazy, but it was so complicated and took forever. Then my wrist injury was quite straight forward but I made it complicated by coming back to soon. The worst injury physically was my back injury in Latvia where I had a small crash but had a stress fracture in my back, it never really got better. It was frustrating, but more frustrating is when you come back to the races and realise how much speed you’ve lost.

Gatedrop: You were close to quitting the sport, are you glad that you made the decision to race in 2016 and how close are we to seeing the real Jake Nicholls? Are you having fun being injury free at the races?

Jake Nicholls: I’m glad to be racing yes, its the life that I dreamed of since I was 5 years old and I have always wanted to be a world champion, and to nearly have to give up was horrendous. But its given me some strength too I guess. I’m having fun and I like my bike, my fitness is decent right now so I’m not far off where I was.

Gatedrop: Have you got a goal you’ve set yourself that’d you would like to achieve this season?

Jake Nicholls: The only goal I set was to get in the top 10 in as many races as I can in the GP’s.

Gatedrop: We are still pretty early in the season, did you expect to be back on the pace so quickly?

Jake Nicholls: I never really think about the future so I cant say what I expected, but the reason I work hard and push forward is to be at the sharp end, so I guess deep down I knew I should be around there soon enough. It was also a little unknown as I haven’t been at the sharp end for nearly two years, so I guess you question yourself a bit.

Gatedrop: After a tough few years were you worried that you wouldn’t get an MXGP ride for 2016? How did the deal with Hitatchi Revo Husqvarna come about?

Jake Nicholls: I wasn’t that worried even after the year I had last year as I was a podium mx2 rider in 2013 and I just expected people to remember that, and remember my work ethic and the heart I have in racing. But I soon found out that people have very very short memories in the racing world, and big eyes for money. Every team I spoke to wanted my dad to bring money into the team for me to be there, this was what caused me to nearly stop racing. My dad has sponsored my racing forever, he sponsored GP riders long before I was even racing a 85cc, but that doesn’t mean he funds my racing, yea sure he did when I entered GP’s at a young age for a couple years, mainly because it was so hard for me to find outside sponsors (as it still is) because they think, he doesn’t need the money etc. But I’ve done all my deals the last few years, and then he felt it was in his best interest to sponsor whatever team I’m on too, why wouldn’t he right? It had nothing to do with me, my deal was done, whether he put in £1 or £100,000, that was his thing. But I’ve had to put a stop to him supporting my racing, which is sad as all he wants to do is help, but teams just see it as a money pot, especially when your on the back foot like I was last year. All along Roger had been the only loyal person to me whereby he offered me a sensible deal without any connections to my dads wallet. That meant a lot to me. But there was still uncertainty for a while leading up to Christmas as Roger was let down by a couple of sponsors etc. But he made it happen!

Gatedrop: Obviously it’s a team you have rode for before, what’s it like being with them again and working with guys like Roger Magee again?

Jake Nicholls: It’s good, like I said, I appreciate Roger giving me this opportunity so much. If it wasn’t for him I highly doubt I would be racing this year. Roger has always been a very easy going team manager. It’s also nice to work with Ian Browne, who’s father of one of my good mates EBB. I’ve known Ian for years, but I really am finding working with him to be really good and he is putting a lot of effort in with the bikes etc.

Gatedrop: Being the only MXGP rider on the team, do you feel the pressure to get results?

Jake Nicholls: No, I feel no pressure, I know that everyone involved in the team appreciates the effort I put in while racing and most of the time it ends up with a result but when it doesn’t they are still fair to me which is good!

Gatedrop: What’s the level in MXGP in 2016 compared to a few years ago? A lot of fast new kids in the class!

Jake Nicholls: I must admit it feels bloody fast this year, I’m riding my 450 like I used to ride my 250, sometimes I look at the top couple lap times and wonder, but its amazing what confidence does to you as well as there skill etc. its good as its making me a better rider too.

Gatedrop: Where you disappointed not to be at the first over-sea GP’s?

Jake Nicholls: Not massively to be honest, i was disappointed to miss Argentina as it looks great but I wasn’t ready for the first two GP’s and to be honest I’ve never really done well at them either, so it was good for me to stay back and work on myself and the bike some more. It was just a shame that there wasn’t many races in the uk in that time.