Interview: Jake Nicholls looks back on his career 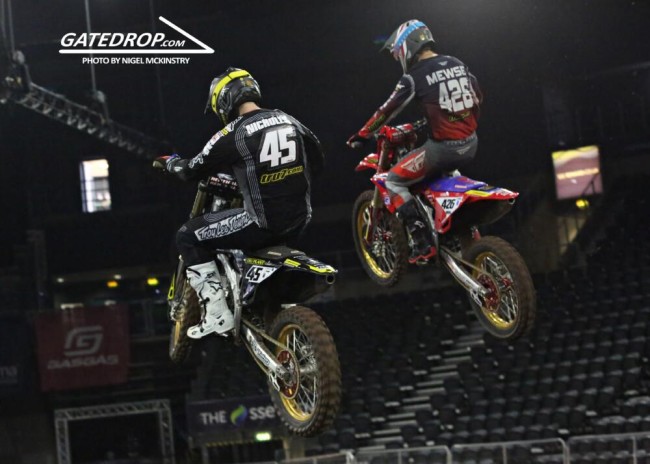 We caught up with the always very honest and engaging Jake Nicholls in Belfast to talk about his GP career, dealing with so many injuries and what it is like to start Arenacross racing in your thirties as a retired pro!

Arenacross: I’m enjoying it, I didn’t really enjoy crashing, it’s part and parcel of it but 32 years old, learning Arenacross, it was straight in at the deep end! Just trying to have a bit of fun and get on board with the series, it’s good that it’s started up again, hopefully try and set a trend for the British riders to get amongst it. I feel like it was a massive part of my career that wee missed, i wish i was younger and could do it again.

Working his way up to become a podium GP rider: I was a long way behind most people when I was 14/15 growing up with Tommy but I had a lot of set backs so it was always chipping away at it. it was a long old road really, I was sort of at the point where I wasn’t good enough to do it for a bit. I just kept plugging away at it, a lot of passion, real, real of passion and determination. It went alright in the end but a long curve. You have got to understand I was trying to do GPs when i was 16, so I was young, qualifying every week pretty much when I was 17 and it rolled on from there. When I was 14 I wasn’t even doing the schoolboy British championship because I had so many injuries and I was struggling. It is funny looking back, I would have done a few things differently and one of them would have been to try and get involved in this sort of stuff (arenacross) at a younger age because I feel like that would help the intensity, i had no intensity on a qualifying lap, useless at it, still to this day i am useless at it! And thought would have helped a lot

Getting that first GP podium: It was so good, I remember it so clearly because at times I never thought I’d get that. The year before I think I had eight fourth overalls, I missed the podium by a point four times or something stupid and I was just like, ‘it is never going to happen.’ So that was good times – scary how long ago it is now and I don’t feel that much different! But life’s changed, I still enjoy riding bikes and having a race.

Moving to the 450 class: I never cracked the 450, I still say to this day I never cracked the 450. I still say to this day I am more of a 250 rider, it’s just a different style of riding and I just didn’t have that. You have to be a bit smoother and take your time and, like I said, I have always rode on a bit of rage and it just never really suited it. I had a few good times on a 450 where I kind of got the hang of it and I feel I was really, really susceptible to bike set-up and if I didn’t get it bang on I wasn’t that great. I spent a lot of energy racing a 450 a lot of the time, racing it incorrectly. In hindsight, if the age rule wasn’t there it could be a different life to where I am now but plenty of people could say that was well.

Coming back after injury and dealing with British title loss: That’s tough you know? It’s carved a character out of me over the years, I was always on the back foot when iw as younger because I was never quite as good as some of the top lads so perhaps I had to work bit harder than them, that’s not to say they didn’t work hard but I always had to chip away a little bit more and I had a lot of injuries when I was younger then i had a bit of a break.

I had a few bad ones and it’s been tough to be honest, mentally as well as physically. I’m fortunate nowadays I don’t suffer from them too much but it definitely took it’s toll. It carves a character of who you are today and I’m a bit of a tough old b*****d threw the ups and the downs. A lot of times I though i was done and couldn’t come back, I think the passion and enjoyment and deep down determination just comes back. You put your head down and the next minute you are back in it. It’s hard though.

Coming from a wealthy background and proving stereotypes wrong: I have always wanted to do it and I have always had the, ‘oh it’s alright for you, your dad has money and he can buy you things.’ But I think that’s why I like motocross so much because you can be a billionaire and it doesn’t make you good, does it? I could be on the same bike as Gajser and he’ll be ten seconds a lap quicker – it’s such a fair sport. That’s why I have always enjoyed it so much and it’s a good path for me to carve my way and show people that you don’t get to fourth in the world with money. Don’t get me wrong, there are a few little shortcuts here and there when I was young to get me on a team, but everyone had that, it wasn’t just me.

But unfortunately in England, your sponsors are your parents, it wasn’t the federation. The Italians, the French, they all had to pay but their government paid. Still to this day, I am busy with the business but I am here ( at Arenacross) because I enjoy it and I think that’s a sign that it’s it a good fun sport and I can’t stay away!

Doing other two wheeled disciplines: I try and do different things and I am not that great at any of them! I think that’s what’s nice when you come back to a motocross bike, it’s like,, ‘yeah, I am still quite good at this and it’s easy for me to do this.’ Whereas a trials bike, I’m useless really, road bike, the same and it’s a lot harder. But also it’s nice because you see the progression whereas probably all I’m doing is getting slightly worse on motocross bike! It’s nice to get back on a motocross bike because it’s natural, it’s so natural but I just try and do as much as I can because you are a long-time dead aren’t you? We work really hard in the business and so when I have time, it’s on two wheels, I don’t really do anything else! there are plenty of things to do but I choose to do this!

Watch the full interview below: