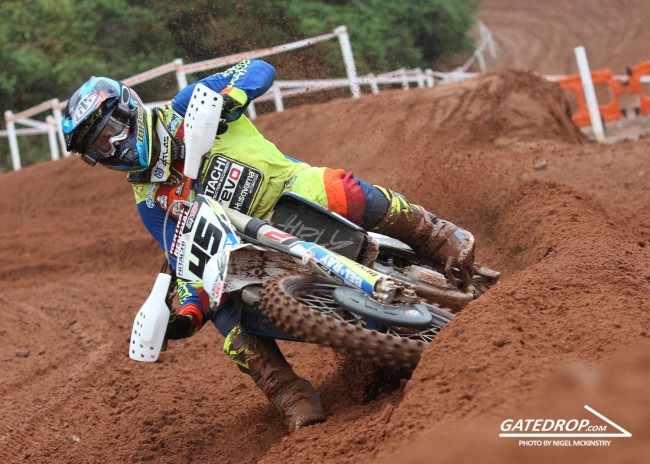 Jake Nicholls has been one of the positive stories of 2016.

After a torrid injury-ruined 2015, the straight talking and hard-working Brit almost didn’t get a ride in MXGP but Jake finally found a home with Hitachi Construction Revo Husquvarna and is really starting to make his mark again at British and MXGP level.

Nicholls rode smart in race one at Desertmartin and took advantage of Graeme Irwin’s crash and Tommy Searle’s mechanical issues to take a big moto win. He started up front again in race two and despite a crash brought it home for third and the overall victory.

The consistency is there and the speed is now back too, and anybody who underestimated the determined Nicholls may now have to eat some humble pie!

We caught up Jake straight after his win at Desertmartin to get his thoughts on the day and next week’s British GP.

Nicholls: I never really felt amazing all day to be honest with you, I just never felt comfortable on the track. Well I did at the start of the that race (moto two) until I fell off. I think got a little down hearted because they (Irwin and Searle) were doing that triple and I wasn’t, it did my head in a little. But at the same time it didn’t make me feel that I was going to do it!

At the start of the second race I felt alright and then I crashed, I lost my rhythm and I knew that Graeme and Tommy had issues in the first one. I just rode my own race. The first one I was lucky to be honest, with Tommy’s bike breaking and Graeme.

But I’m really pleased to have won here at Roger’s home race. (team owner). I’m not sure I have even won an MX1 overall before!

To come back to the top step after the way last year ended it must be very satisfying?

Nicholls: Yeah, it’s been a bit of a mission to honest! This team have been really good, there is no pressure and I have been able to do my own thing. I feel really comfortable at the minute.

Did it help having ridden for Roger before? You knew what to expect?

Nicholls: Yeah I like how he works, he is really easy going, all the people behind the scenes really make it a real homely atmosphere.

The track looked very tricky in places, do you end up racing the track more, especially the second moto?

Nicholls: Yeah straight from the start I was a little bit wary of it and I thought I would try and be a little bit sensible. I like it when it’s like that but the rain made it a greasy on top so it was a bit tricky. My track at home is quite like that so I did enjoy but I was bit wary of it. Also the position I was in was all to lose, if I had come from the back I probably would have ridden better.

First overall today sets you up nicely for the British GP next week, you must be looking forward to that now!

Nicholls: Yeah I am getting a bit better every week, the bikes are going in the right direction and the bikes are good now, we have it to a good level. I like Matterley Basin and I want to keep building and keep going the way I’m going.

The GPs seem very tough this year, it seems like from eighth to 20th their isn’t much speed difference, does that put even more pressure on the start?

Nicholls: Yeah it’s really tough this year, I look back to 2014 when I got sixth in one race and I think I’m riding so much better not that I was then! My best has only been eleventh this year, I had a seventh in the qualifying race but I’ve yet to do it on a Sunday. The starts are really difficult against the factory bikes, they are so good out of the gate. I’ve got the bike really good on the track and now I just need to work on the starts.

What are your expectations for next weekend?