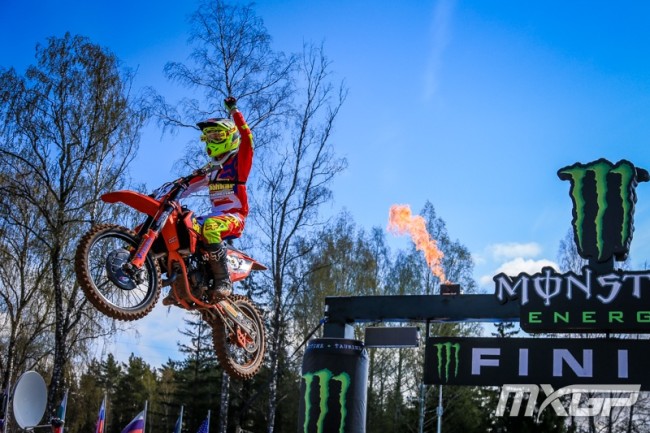 If last week’s performance in Latvia is anything to go by then Jago Geerts is Belgium’s next big talent!

The youngster dominated both motos in the EMX125 class and showed that he is the rider to beat for 2016. Indeed he showed good promise last season only for injury to derail his season but make no mistake, Geerts is on a similar level to the much hyped Spaniard Jorge Prado, but instead of the USA, Geerts main focus is the world championship.

We caught up with the talented teenager to discuss his impressive performance at round one of the EMX125 championship.

Gatedrop: Can you talk me through your weekend at Latvia?

Geerts: The weekend started good with a 1st time in my group in time practice. I liked the track and felt good on it first race I had a collision with vd Moosdijk after the gate dropped but I still got 5th out of the turn then worked my way up to 1st and finished the race with a good feeling! Second heat I got the holeshot which I was very happy with and I rode a good rhythm and finished first again.

Gatedrop: Did you expect to win the first race in Latvia with such a big gap?

Geerts: I felt good on the bike so I knew I could do good in the races but it was a surprise that I could win the race with a pretty big gap yes

Gatedrop: You were a big favourite coming into Latvia. Did you feel pressure heading into that race and did you get any nerves?

Geerts: I didn’t had more nerves than other years , I just see how it goes and then we will see the results

Gatedrop: As the season progresses who do you see as your main challenger for the title?

Geerts: I think that there are gonna be like 5-6 strong riders some are better in sand and some on hardpack.

Gatedrop: How frustrating was it to get injured last year? You never got a proper chance to show what you could do while Prado was getting all the glory!

Geerts: Yeah in the beginning off the season I had some problems with suspension and then I also got a injury what was pretty frustrating but I stayed calm and after the injury the bike was much better and the results started to come as you could see in the end of the season!

Gatedrop: You are really strong in the sand, have you worked much in hard pack over the winter?

Geerts: There are not so much hardpacks really close to my home but I went a couple times to France in the winter and had some good riding there but I rode more in the sand this winter but now I’m going to train more on hardpack for a while because we have much hardpack races now

Gatedrop: Are you looking forward to showing what you can do in Italy? That wasn’t the best round for you in 2016!

Geerts: Yeah I had some problems in Italy last year the setup of the bike was still not on point and the races didn’t go as planned but now this year the bike is good and I’m motivated to show what I can do there

Gatedrop: You are racing for Sakhar KTM at the moment, one of the smaller teams in the paddock. There are rumours that a lot of factory teams have already approached you. Do you know where you want to be in the 2017 season?

Geerts: There is nothing decided yet . I like the Sahkar racing team but we will see what the future brings!

Gatedrop: What are your goals for the future, when do you think you will step up to the 250?

Geerts: Next year I’m normally riding the emx250 class and then we will see how it goes on the 250!

Gatedrop: Some guys go straight from EMX125 to MX2 while others go to EMX250 first. Have you thought about what route you want to take?

Geerts: I think its the best to go first to emx250 class because straight to mx2 will be hard especially the first races I think it’s a higher level than you are used too.

Gatedrop: I believe your Dad used to mechanic in USA. Can you tell me more about that? Who he worked with etc. He must have your bike working good!

Geerts: Yeah he worked for a couple of GP riders like Jacky martens, Bob Moore, Marnicq Bervoets , Axel Holvoet, he also won the motocross of nations as a mechanic of team America! Now he is my mechanic haha!