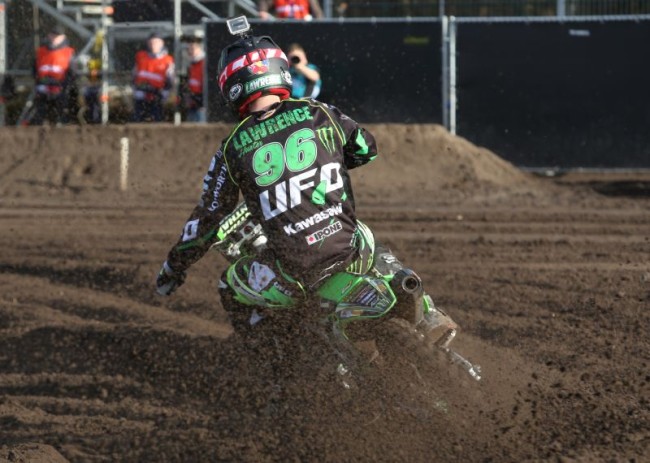 Hunter Lawrence made his EMX250 debut at Valkenswaard and he was very impressive. He has only been in Holland a short time and already looks comfortable in the sand, it takes some riders years to learn how to ride the stuff!

At just 16 years old, Hunter has a very bright career ahead of him. The Kawasaki Racing MX2 team took a bit of a risk to sign the Aussie as you never know how they will adapt to racing the World Championship tracks as they are all so different. So far, so good though for Hunter as he ended up fourth overall during him EMX250 debut and he will only get better as the season progresses.

We sat down with Hunter to discuss his debut and settling into life at Holland.

Gatedrop: You just made your EMX250 debut here at Valkenswaard, you must be happy with your performance in the sand!

Hunter Lawrence: Yeah, for sure! Starting off with qualifying, I qualified third in group two so I was happy with that. It gave me a pretty good gate pick, I think I was sixth when they combined both the groups.

I got a good start in the first one and came around in second, not a holeshot but hey, still pretty good.  I stayed there and finished second, Conrad (Mewse) rode a great race and I couldn’t pull him in, I put on a bit of a charge in the last lap and caught him. On the finish line straight I made a bit of a mistake and lost it a bit.

Moto two I didn’t get as good a start but I made my way through the pack, made some passes. I made a bit of a charge and then got into the lead in lap five or something. Two laps later I let it get away, doubling into the rollers before you go up the hill, I came up a bit short, landed sideways and ended on the ground. When I got back on the bike I was second or third, with two laps to go I had a bit of a lapper problem and I put it down again there.

It wasn’t too bad, nothing to frown on, I got fifth and fourth overall. I am still young so mistakes and stuff are bound to happen but I as long as I am fit and healthy throughout the entire season then I believe I can win it.  We will keep going step by step and round by round, we will aim to be better than what we were at the previous round.

Gatedrop: I imagine you have been riding with Dylan and Petar a lot during winter, that must have helped your speed a lot coming into the season.

Hunter Lawrence:  For sure, I have been riding more so with Petar,  Dylan is down in south France but whenever I get to ride with those guys it is awesome.  They’re not slow riders, that is for sure.  It has really helped me progress on the bike and helps me get the suspension and stuff going, its helped out a lot as well.

Everyone on the team that has help me out has been great, it’s been a good place for me to progress. Petar being a training partner, I suppose you would say, it’s been awesome, he is a really nice guy. He has helped me out with lines and stuff, even today and he is a good team mate, I’m glad to have him.

Gatedrop:  Getting a fourth overall in the sand is great, you must be looking forward to showing what you can do on the hardpack, you could potentially win.

Hunter Lawrence: Sure, I have only been in Holland for three months, from what people have been telling me, people have said that fourth is pretty good or not bad.  I wouldn’t mind the win but we are all here for that, my time will come I just have to be smart.

I am riding and training as much sand as I can just to get my time up. Look, the track wasn’t exactly easy (laughs), it was pretty gnarly out there!  I am happy with how I rode, maybe back to the drawing board on Tuesday to sort some things out and come back in Latvia strong.

Gatedrop: Holland is a lot different from Australia, how are you dealing with living in Holland?

Hunter Lawrence:  Sure, the push bikes here are crazy, driving around and there’s push bikes that we are stopping for, crazy! Back home the push bikes stop for the cars so it is a bit different for sure. My whole family are over here now and everything is different, things like food, shops, gym, getting around.

It is definitely different but I think now we are starting to get our feet planted pretty good. I am interested to see what the next few weeks hold when everything is in a program and it’s a bit more of a normal lifestyle whereas before it’s still a bit of a dream coming over here.  Before it was just chasing a dream but now it is definitely becoming a bit more of a reality, it’s good and I am enjoying it.

Gatedrop: Some riders struggle jumping up to the 250 from the 125, but you seem to have no problems adapting. What was your feeling like the first time on the bike?

Hunter Lawrence:  Yeah, it was awesome the KX250 is such a good bike.  I don’t think the European guys do it much but last year I rode 125 and 250. That was me getting used to it and getting on to it to get used to engines, braking and stuff like that. I’m pretty sure the Euros just ride one bike. It was good but last year was more just learning the bike.  This year, I guess I had a bit of a head start with the engine and all that but I think my riding style suits it a bit more. I consider myself a technical rider.

I can’t thank my entire team enough, they took a gamble from last year in Spain during the Junior World Championships and took a gamble on this aussie kid that wanted to come to Europe and chase his dream.  I can’t thank Jean-Jacques and Gael enough and the whole Monster Energy Kawasaki Racing team, I owe a lot to them.

Gatedrop:  Does part of you wish you were racing the MX2 World Championship? You clearly have the speed for it!

Hunter Lawrence:  Sure, racing MX2 would be awesome but I look at it this way, EMX250 is still an unreal class and I am learning so much already. The way I look at it is that I could be back in Australia racing the MX Nationals under 19 class. It’s a good class and all that but it’s still nothing compared to the EMX250 class.

I’m just grateful to even be in Europe, it’s crazy, my first ever senior role and it’s with a factory MX2 team so I’m not really bumming out about not racing MX2.

Gatedrop: Is there a chance we could see you racing in MX2 before the end of the year if they don’t collide with EMX250?

Hunter Lawrence: We have definitely thought about it for sure. I suppose we will just see how we go with the managers and we will talk. We will see what the bosses think. It would be awesome as it’s an amazing class, the talent pool is so deep.

Obviously, Jeffrey is pretty good then you’ve got the Yamaha boys, the Standing Construct/Kemea guys, you’ve got Petar, Dylan who’s injured at the moment but he’s stupid fast as well.  There are so many guys in the top ten that can run up in the top three so I would love to do it towards the end of the season because the EMX season finishes pretty early.  It’s something I would like to do so we will how we go when we get there.

Gatedrop:  Apart from the EMX250 championship, what other championships will you compete in?

Gatedrop: A lot of Aussies dream about America but you are over here. Now that you are here and see how cool it all is, do you see your future here in the World Championship?

Hunter Lawrence:  Yeah, in Australia everyone talks about America. I guess it’s more because we are in contact with America. I have been coming to Europe for nearly every year since I have been on a 65 for the Junior World title.

I love supercross and obviously it’s big in America but MXGP is a pretty impressive event.  Chad Reed came here and did one year, then he went. Everyone has asked are you going to do this like Chad,  the more I come to the GP’s the more I wanna stay here.  It’s just unreal, today we have had rain, sun then rain again. It’s just so tough, sure America is tough too but this is where motocross is I think.

Gatedrop:  As we are a site from Northern Ireland we have to ask, you have Reece Boal working with you and doing your race engines, how is it working with him?

Hunter Lawrence:  It’s a real pain in the butt, I need to get him out soon (laughs). No, he’s a really good lad, he has got my engines running sweet.  I haven’t had any dramas with him so far, this is one of the fastest bikes I have ever ridden.  Out of the start my 250 is just a rocket ship! It’s awesome working with him, he’s such an energetic guy that really loves his job and takes it to the next level. He’s a guy you want on your team, put it that way. It’s not only his job but his passion and he lives for it so it’s good.