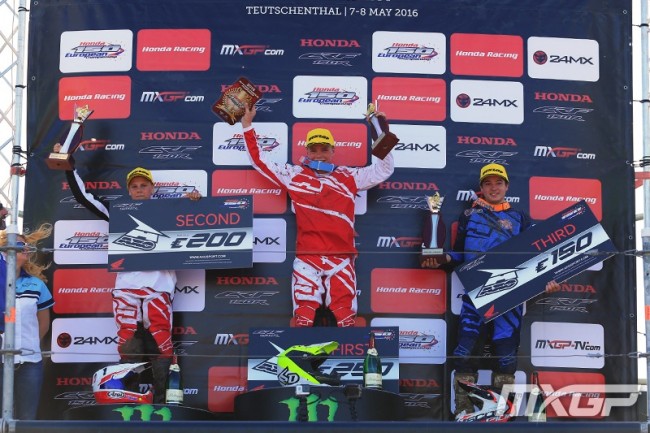 During the German GP at Teutschenthal it was also the first round of the EMX150 championship. This championship is a great way for kids to race on the same weekend as the best riders in world. The kids also get a free entry and bikes supplied for them which means they only need to pay for accommodation and travel.

It makes it a lot easier for the kids to show their talent. Heading into the 2016 season defending champion, Emil Weckman was a favourite for the championship. However, after he made a mistake in the second moto in Germany, Haakon Fredriksen was able to take advantage and win the first round. He now has the red plate heading into the next round at Matterley Basin.

We decided to sit down and talk to Haakon about his impressive first round and what it feels like to be leading the championship!

Gatedrop: Can you talk me through how the first round went for you at Germany?

Haakon Fredriksen: In timed practice I felt the track was really heavy and tried to keep the speed up but they had put a lot of water on the soft places, the bike almost got stuck in the mud but I made it to second gate pick. In the first moto I had a mid-pack start but made some quick passes and started to close in on Emil. I had a little crash and was like eighth but I worked my way through the moto and ended up in second. In the second moto I took the holeshot but made some mistakes and Emil and jago passed me. I started making up te speed and passed jago.  I got a message from pit-lane that Emil was just nine seconds in front of me, next lap Emil was just six seconds in front of me and I think that he started to stress, he made a mistake and crashed. I just just kept my speed and took the moto win and overall.

Gatedrop: In practice Weckman was five seconds quicker than anyone else. Where you worried he would dominate?

Haakon Fredriksen: I was second in the timed practice but I wasn’t thinking about Weckmann being five seconds faster than me. I just thought myself and knew that it was the moto’s that count and tried to think about that.

Gatedrop: Just how good did it feel to win in Germany and to now have the red plate?

Haakon Fredriksen: It was an amazing feeling to win put trying to keep it a little low because its a long season. I want to win during the rest of the season! Of course is it good to win a round in the 150 European championship.

Gatedrop: The track looked really rough, just how tough was it for you on your 150?

Haakon Fredriksen: The track was so good! There were lots of lines and ruts to pick from and it was a little like enduro.  Back home in Norway is it one meter snow each winter and then I ride just enduro and a home-made Supercross track.

Gatedrop: Coming into this season what was your goal for the season?

Haakon Fredriksen: The goal is to win and ride the EMX250 European championship for Honda JTech next year.

Gatedrop: Just how good is it to have the opportunity to race on the same weekend and the same tracks as the best riders in the world?

Haakon Fredriksen: It is amazing to ride with the pro’s and watch them them riding and see how the teams are working.

Gatedrop: Out of all the tracks on the calendar what one are you looking forward to the most and why?

Haakon Fredriksen: Definately England, Matterley Basin. It has so much jumps and cool corners and I think there’s going to be a lot of ruts and lines but not as may as Teutschenthal.

Gatedrop: What one motocross rider do you look up to the most and why?

Haakon Fredriksen: Tim Gajser. He was almost dominating the MX2 championship and he is on the podium each weekend in the MXGP class and he is riding honda.