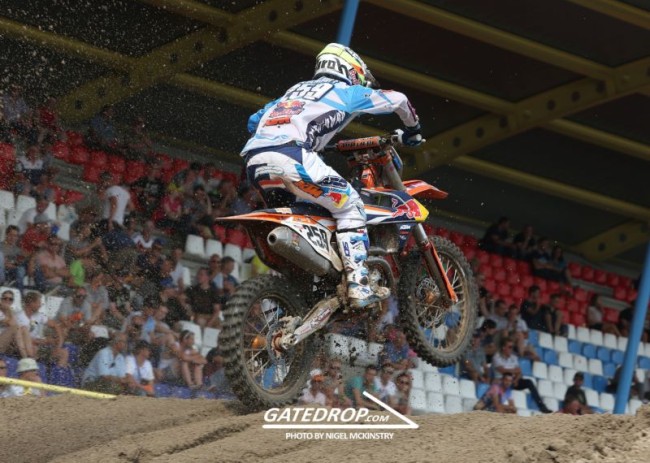 Last year was Glenn Coldenhoff’s rookie season in the MXGP class on-board a Suzuki. He had a good rookie year ending up eighth in the championship. The season had some highs and lows but he was able to win an MXGP overall in Latvia which isn’t an easy thing to do!

Coming into this year the expectations were high and he switched to the Factory KTM team to partner eight times world champion, Antonio Cairoli.  Glenn had a slow start to the season but has started to improve over the last few months and we are now starting to see what Glenn is really capable off.

Despite a slow start to the season he still sits seventh in the championship standings which is an improvement from last year and it is worth pointing out that the depth of field is much stronger this year as well as less injuries compared to last year.

Glenn had a great weekend in Assen in front of his home fans. The Dutch fans badly wanted to celebrate a podium in MXGP and Glenn didn’t disappoint by ending up third overall.

We decided to sit down and talk about his great weekend in Assen and his season so far.

Gatedrop: Glenn, a podium this weekend for you, you must be delighted with how the weekend went for you?

Glenn Coldenhoff:  Yeah, it was really good. I started off yesterday already with a good feeling. I am always happy to come here, especially after last year when I got the podium as well.  I was really looking forward to do it again this year and I made it.  I am really happy with that, you know the last few races have been going better and better, I’m starting to feel more comfortable on the bike.  I think we have made some really big steps with the KTM 450. I am just really happy to be back on the box; it has been exactly one year now that I have been on the box so it’s cool to be back here.

Gatedrop: It must be even better doing in front of your home crowd, what was the support for you like this weekend?

Glenn Coldenhoff:  It was amazing but it was also last year and we have a pretty crazy speaker (commentator) here in Holland and he also made the fans be more loud. It’s really nice to ride in front of those guys, I think it’s typical here in Assen because I’ve never saw it like a home GP like this. It made Assen really special for me.

Gatedrop: Assen tends to get a lot of love and hate, what’s your opinion on the track and the facilities?

Glenn Coldenhoff:  I think this year that they got a little bit unlucky with the rain we had, otherwise I think we would have got nice racing especially in the first moto like Tony said in the press conference that it was not fun at all.  I mean, also not for the crowd either, we went so slow and it’s not fun to watch but anyway that’s part of the sport. For the second moto the track was a lot better, we had a little bit of a higher speed but still, those jumps were pretty sketchy.

Gatedrop: You’re not a rookie anymore and you’re with Factory KTM so the expectations are quite high for you, are you happy with how the season has gone for you so far?

Glenn Coldenhoff:  I was struggling a little bit at the beginning. But, then it went well and I felt good on the bike. Especially the last few months we got some new things on the bike, with Tony changing from 350 to 450 all the time the factory has been working really hard to get what we want. We changed some things on the bike and that has definitely helped. I must say that the suspension is working really good at the moment, we have stepped it up big time. Right now the bike is just how I like it so it’s good.

Gatedrop:  If you had to compare the MXGP class from this year to last year, would you say the level is even higher this year?

Glenn Coldenhoff:  Yeah, for sure it is harder! I mean you know last year when I made the podium here there were a lot of riders out injured. This year all the guys were there so no excuses or anything. Compared to last year the top fifteen are just incredible, if you have a bad day you will finish in fifteenth and if you have a solid day you will be in the top ten. It’s really difficult to get a podium!

Gatedrop: Last year Suzuki decided that they weren’t going to continue with you for 2017 quite early, were you disappointed that they didn’t put trust in you for this year?

Glenn Coldenhoff: Yeah, at that time of the year (before Glenn won the Latvian GP), they decided on Kevin Strijbos and Clement Desalle.  Okay, that is a solid decision I think, it was quite nice of them to tell me quite early in the season. In the end Desalle didn’t stay and they could have a spot for me but it went like that. I went to KTM myself, I think it’s a great team, they have showed already for many years that they are really on top of this paddock so I am really happy they give me this opportunity. I have a two year deal so next year I will have another year with them, I think it’s good to have another year on the same bike so I can build some confidence during the winter time to put in good results next year.

Gatedrop:  MXGP heads to America now for the US GP’s, are you excited to race new competition their and show the American’s what you’ve got?

Glenn Coldenhoff: Yeah for sure, there are some big names coming so it is always exciting. As we said already our class is just tough and with those guys racing it will make it even tougher.  It’s going to be really exciting and the start is going to be very important.

Gatedrop:  You must be very excited for the Nations this year as it’s the first year in a while the best team can go and Herlings will ride. What do you think Holland is capable of at the Nations?

Glenn Coldenhoff: You know it really does depend on the starts. I think we have a really strong team at the moment. With Jeffrey (Herlings) and Brian (Bogers) I think we can surprise some people. Maggiora is a typical track, you either love it or hate it. Yeah, I don’t know what to say but I think we have a strong team and we go in as the underdogs.

Gatedrop: You are really fast in the sand but the hard pack is a bit of a weak point for you. Will you go to Italy with the team during winter to ride hard pack?

Glenn Coldenhoff: You know, in Switzerland I also finished in third (in the second moto) so I don’t think I have been struggling in the hard pack lately. So yeah, I think I can do well also on the hard pack, I just need to have the confidence and the right feeling, as I said the bike has been improving a lot and I’m not scared anymore for hard pack. But, anyway this winter we will train on the hard pack, the team is based in Italy. We have an amazing facility over there and we will definitely train on hard pack as well.