Interview: Giuseppe Luongo hits back at the MXoN date critics! 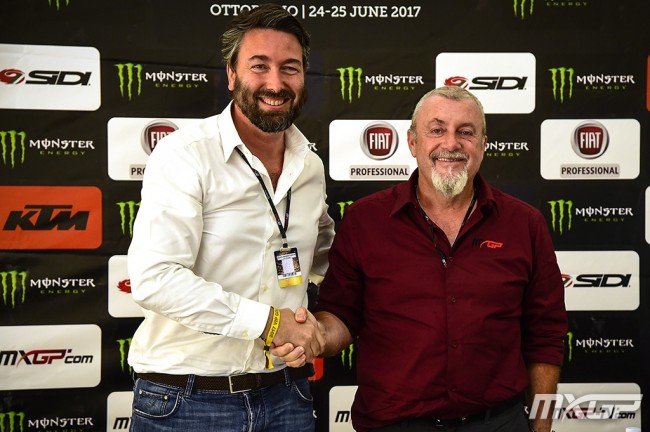 Giuseppe Luongo has set the record straight after allegations in the US media that Youthstream are moving the MXoN date further back to hamper the American team.

But The Italian believes it is a made-up story in a bid to “create friction” in relations between MXGP and AMA racing.

We also talked to Giuseppe about the Cairoli/Herlings battles as well as the new calendar and fitting all the top riders in MXGP into competitive teams!

Read below the forthright views of the President of Youthstream as well as his hopes for a very successful US GP in less than a months time with the help of MX Sports.

The battles between Jeffrey Herlings and Antonio Cairoli have been brilliant in recent weeks, this must be great as a promoter to see these two finally battle after years of waiting?

Yes, with Jeffrey’s talent and physical strength, he could have come to MXGP earlier, but it has been well worth the wait, and now, as you say, finally we can see these 2 mighty talents battle together.  It’s great spectacle and great for the fans, championship and for the sport.  It’s a shame Jeffrey lost so many points at the beginning due to injury, otherwise we would have seen a truly unbelievable championship played right up until the last moto.  But anyway, with still 5 GPs to go and anything could happen.

How are the preparations for the US GP going with the late announcement on the new location?

Preparations for the US MXGP are going very well, MX Sports did a great job in finding an excellent replacement on such short notice in the same area; as all the airplane tickets and freight had already been booked, the fact to be able to use the same airport was essential.  The change is very positive.

Do you expect many American riders to be there?

Yes, the goal of MX Sports and Youthstream is to organize the best US MXGP ever, we have both made all efforts to have the best US National riders together with the MXGP riders, and Monster has supported us very much with all their teams/riders.  It will be amazing.  I believe the quality of the event along with the presence of all these riders will make for an incredible weekend of MX racing.  Now I am very curious to see how the fans respond, because for this event the investment has been huge and it’s very important to see the fans’ reaction.

With Eli Tomac suggesting he is out of the US team for the MXON, and members of the US media saying there is an anti US agenda by Youthstream with the date of the race, what do you say to those accusations and will the race be moved forward just to suit the USA?

This is just another story made up by some press to create friction between the World Championship Motocross and the American Championship Motocross during a time where relations between the 2 have never been better.  Of course we want to have the Americans at the MXoN, and every year we make all the efforts possible to have them creating strong links between the MXGP world with the American Motocross world, a clear example of this is the agreement between YS and MX Sports for the MXGP and the MXoN in USA.  Apart from 1 or 2 since the middle of the 90’s the MXoN has always been held at the end of September and all the top American riders have taken part (Emig, McGrath, Windham, Carmichael, Stewart, Villopoto, Dungey and Tomac too).

American riders have a lot of races (17 FIM SX World Championship events, plus 12 AMA MX National events, plus the Monster Cup makes 30 professional events per year), also the MXGP riders have about the same number of races (20 MXGP events, plus preparation races at the beginning of the season, plus their National Championship races).  If they are doing too much or not is a matter of opinion – there are 52 weekends in a year and they have about 30 professional race weekends, is that too much?  I only know that in the past, at the time of the ‘Dream Team’, the US riders did many more races than now, because on top of the SX and MX Nationals they did a lot of International races, and they made much less money compared to today, but they were extremely proud to be chosen to defend the colours of their country.  And that’s what the MXoN is all about that, it’s to race for your country and prove the value of your sport in your country, but maybe we are in a world where those values are worth less and less.

I will not give any opinion about Tomac or any other rider, but what I am sure is that America will be present with their best team possible given the riders available, and those riders will undoubtedly defend their flag’s honours as they have always done in the past.

We are hearing that factory teams, especially in MX2 might be doing some budget cutting for next year and some good riders might get squeezed out, what are your thoughts on that?

At this time of the year, we always hear these kinds of things, because the riders without a handlebar at this time start making some noise, in reality between now and the end of September everything will be arranged.  I know there are a few teams that will stop, but I also know some other new teams requesting a start for next year.  Clearly the faster riders will be grabbed up immediately and get the best handlebars, and I really don’t think that by October there will be a fast rider without a team.  Obviously, when a rider loses their place in a team, this place is taken by another rider, it’s not kept empty, it’s just the choice of the team for a different rider.  We often hear talk about budget cutting, but we don’t often hear about how well Motocross riders are currently being paid, never have Motocross riders been so well paid in the history of MX as they are today.  Like in all sports, the difference in the salary between the top ten and the rest is a huge.

Ideally if all factory teams ran three riders that would help with so many fast riders looking rides. Is that something you’re looking to enforce in the future?

This would be fantastic, but this is up to the manufacturers and their budgets to do it or not.  For sure we would be delighted with this, but also we would also very much like the option where every manufacturer has a factory team AND the addition of a satellite team in each class.

The changes to the calendar next year seems to have been met with a lot of positivity with Argentina a great place to start the championship – a great track and a big fan base!

Yes, we think Argentina is a great place to start the Championship, because it’s very successful Grand Prix; great organizer and great track, a lot of fans and the MXGP world feels very welcomed by the authorities and all the people living in that region.  Motocross in Argentina is becoming increasingly popular, like in many other parts of the world where we take MXGP events, like Indonesia where Motocross is living a real boom, with a lot of riders, a lot of fans, many local races, and we have a huge mass of Indonesia fans following us via the social media, and last but not least, Indonesia is one of the biggest motorcycle markets in the world.  As for the rest of the calendar, we are delighted to have so much interest from so many countries – MXGP has a very bright future in front.