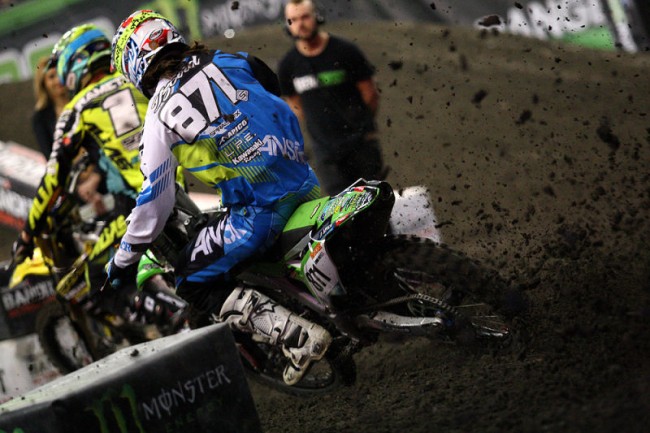 In 2014, Fabien Izoird contested the Arenacross UK and ended up winning the title! He couldn’t compete in 2015 due to injury but he is back this year again in hopes to regain his title! Fabien has started the season well on-board his LPE Kawasaki and has been the most consistent rider in the series so far.

He rode brilliant at the second night in Belfast taking the main event win which now means he has the red plate heading into Birmingham this weekend. With big names Josh Hansen, Thomas Ramette and Cedric Soubeyras also competing the Arenacross UK this year it is all left to play for!

We caught up with Fabien in Belfast after his main event win to talk about his brilliant performance and the British series!

Gatedrop: First of all, can you talk me through your first night here at Belfast..

Fabien Izoird: Yeah, last night was not the best of course. In the main I started third behind Josh Hansen and Thomas Ramette. Josh crashed so I was into second, I tried to find the solution for Ramette but there was too much focus from him and I couldn’t find the solution. Soubeyras passed me on the last lap so I finished third and on the box but not happy.

Today, I was second in the head-to-head which was much better and I had a good feeling with the bike and I win the main so I am really happy about this night. We will stay focused now but not for the championship because of course it is good for the team to take the lead but I like riding like I did today with a good feeling on the bike, be aggressive but not on the other guy, just being aggressive on my side and no mistake, riding like this is a big pleasure.

Gatedrop: What was your thoughts on the track? Belfast usually gets softer than it did this weekend..

Fabien Izoird: Yeah, I didn’t ride here last year because I broke my back. I have only rode here at 2014 when I won the title. I am back this year, the track is hard but that is part of the race.  All the guys work really hard and every time we had a good track so overall I am really happy. Sometimes, it is good having the soft tracks as it allows for a lot of mistakes, that is the key for winning or finishing on the box, it was great.

Gatedrop: You have some experience riding Supercross in France but the tracks in the UK are very different from your homeland..

Fabien Izoird: Yeah, of course here it is Arenacross, it’s in the name. It is much softer and really fast. In France we have two types of championship, we have the outdoor series with the big big track and the indoor series. The indoor tracks are more bigger than this one and the dirt is also more hard but the race is the race.  If you want to win you have to be the best everywhere. It is a good championship, we have a lot of good riders here, great organisation and a great team so we are happy to be here.

Gatedrop: In 2014 you won the championship, what attracted you to come over to compete this year again?

Fabien Izoird:  Of course I am back to win it again but you know I have a lot of competitors this year but the goal was the same. To start with a good pleasure on the bike and then I hope to win the title for the team again after a long series also competing in France. I hope to stay on top here and back in France.

Gatedrop: With big names coming to race Arenacross UK like Josh Hansen and Cedric Soubeyras, do you feel the series is getting bigger?

Fabien Izoird: Yeah, I have a good relation with Josh and we speak a long time before I raced here. Sometimes, it is crazy he is riding here as the track is soft, not like in US and Arenacross. We watched some races, it is pretty fun riding with him at the small tracks, sometimes it is soft and smaller. I am happy to pass Josh but he can also win when he can, it is a good championship.

Gatedrop: We have six rounds left, what are your goals for the rest of the series?

Fabien Izoird: I hope to win every one but I don’t think it is possible! The goal is to do my best and I want to see the smile on my mechanic and team owner, that is my goal to finish the season.

Gatedrop: Looking ahead in 2016, what are your plans for the motocross season?

Fabien Izoird: I have a lot of races in France with my Honda team. I am riding in France outdoors and supercross series also. I will race European Supercross races if they are not the same dates as the French rounds. Maybe Germany and I also hope to come back here next year.

Gatedrop: You now have links in the UK racing this series, would there be a possibility of you doing a few British motocross races?

Fabien Izoird: I don’t know, we will see with Steve but of course I would be happier to ride with him but I am riding with Honda in France so for the moment it is okay. I know it will be difficult this year to ride with Steve but I have a very good relation with him and we won the title together in 2014 so I would like to be back again and I hope to get the green flag from Honda but I don’t know, we will see!