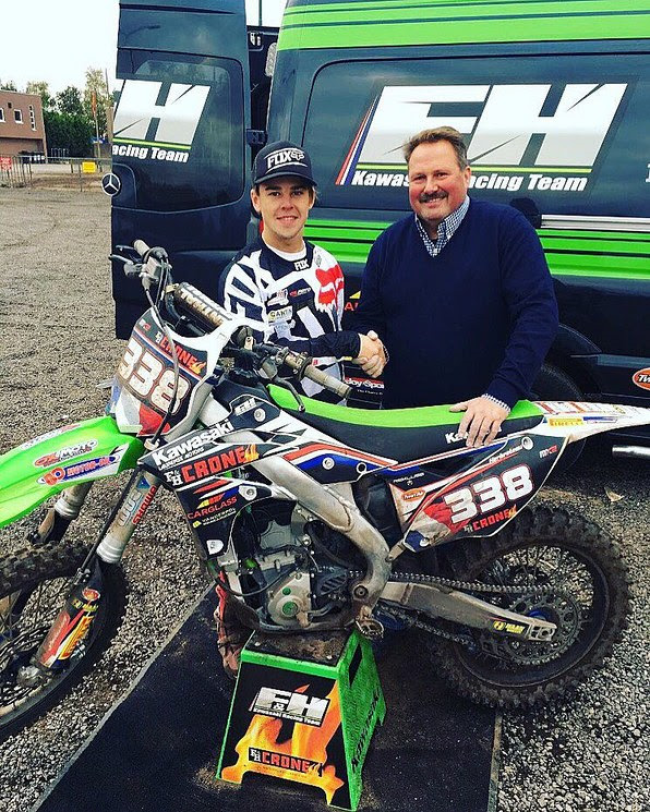 Since moving up from the 125 to the 250 machine the highly rated David Herbreteau hasn’t been able to show us what he can really do – mostly because of injuries! This time last year he signed with Honda to replace the World Champion, Tim Gajser. The fact that Giacomo Gariboldi showed his trust in the young French rider shows that he has the talent.

At just eighteen years old David still has a lot to offer. He has signed with the F&H Kawasaki team for the 2017 season to contest the European rounds of the MX2 World Championship and will be hoping to stay injury free for an entire season. If he stays fit don’t be surprised to see Herbreteau mix it up in the top ten of the MX2 World Championship.

We decided to catch up with David to talk about his new ride!

Gatedrop: David,You will race for F&H Kawasaki next year, how did the deal come about?

David Herbreteau: The deal was not difficult. During the winter in 2015 we starting training and competed in a few ONK Dutch Championship races. After, we agreed a contract to work together. Then I decide to stop. But anyway, since the beginning I had a good feeling with Harry Fase, the team boss.  In my head I wanted to try and work with him again. I think we can build something really good and that is why for 2017 we contact each other to rebuild a new adventure.

Gatedrop: Last year you had the opportunity to ride on a factory team in HRC Honda, how did it go for you and was working with the team like you expected?

David Herbreteau: It was a really great experience. In your career you have to know that you don’t have a lot of opportunities like this. Giacomo (Gariboldi) invested me to ride for him when I didn’t even have a bike.  He knew that I had a potential to go for top ten results during the season.  I got injured in Spain when I was starting to improve. After that the dream was turning into a nightmare.

Gatedrop: Since moving up to the 250 you have picked up a lot of injuries it must be very frustrating?

David Herbreteau: For sure it’s frustrating. I broke my foot twice and it was pretty bad.  But, this is the motocross life.  You have to keep calm and positive when it happens.

David Herbreteau For sure I was replacing Tim Gajser who was world champion.  The only difference is that I was riding for Giacomo (Gariboldi) and not for HRC.   Nobody was putting pressure on me. However, I was putting too much pressure on myself with the people who was working with me, I wanted to deliver for them.

Gatedrop: Apparently you weren’t giving the same factory material that Gajser got given, is this true?

David Herbreteau That’s true but Giacomo was clear with me from the very beginning.  He was saying to me “David, we can’t be sure on getting HRC material but I will do my best”.  You know, for me at the moment it was enough.  For sure it maybe would have been easier with HRC support but this is the way we did it.

Gatedrop: Was it disappointing that Honda let you go after the 2016 season considering you didn’t get to show us what you could do because of an injury?

David Herbreteau: Giacomo and I had a very long discussion and we are still in contact now.  I didn’t feel good when he said to me that it was not possible to continue but he also explained to me that he was moving to the MXGP class. Anyway, I was also happy for all the hard work he give, especially after the team won two world championships.   He deserves it and I would like to thank him for the 2016 season.  I will work hard and maybe one day I can work with him again, who knows?!

Gatedrop: You have been riding on the Kawasaki a while now, is it good to be back on a bike you’re familiar with and what’s the speed like?

David Herbreteau: The Kawasaki is a really good bike. We have to work on it but I have people around me who are motivated to give the best and make the bike the best it can be. For me it’s the most important thing.  Actually the speed is not where I want it to be yet but we are going a good way. The most important thing is to be ready for the first GP.   I have been building my body up but also focusing on my riding. My goal is to go step by step with no injuries.

David Herbreteau:  Actually my goal is to build up throughout the season. I will be working on my body and on my bike. I will give it my best and I know my time will come. I’m only 18 years old so I still have 4/5 years on the 250, we will go step by step.

Gatedrop: Since moving up to the 250 from the 125 what have you learnt?

David Herbreteau: A lot but for sure one thing. When you are a GP rider it’s not a game anymore. It’s a real job and you have to invest in yourself at 200%. The gap between EMX125 and EMX250 is big but the gap between EMX250 and MX2 is even bigger!

Gatedrop: Apart from the MX2 World Championship will you race any national championships?

David Herbreteau: For sure. We will do the Italian Championship, maybe few French MX Inters and ONK Dutch Championships. Harry Fase will make everything on point so that we became the best as we can.

David Herbreteau: First I would like to thank you for the interview, maybe the only one this winter and I really appreciate it . I also want to thank all the F&H Racing Team including, Harry Fase, Bryan Fase, Marc Zalmstr , my girlfriend but also a big thanks to all my family, my parents, grandparents, sister and Antoine from the shop Oxmoto.