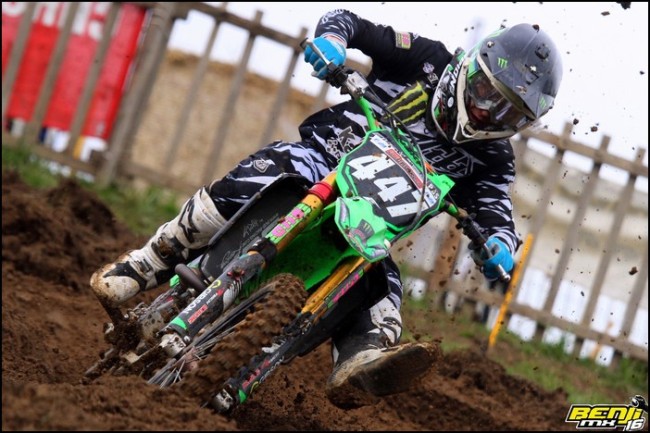 Last year Darian Sanayei decided to race a one off race for him at Matterly Basin. He contested in the EMX250 championship for Steve Dixon racing team. Darian rode well and won the first moto, he followed that up with a twelfth in moto two for fourth overall which was a great debut.

Darian signed with the BUD Racing Monster Energy Kawasaki team for the 2016 season to race supercross and the full EMX250 championship. Unfortunately, he got injured during the supercross season but he was back on the bike a few weeks before the first EMX250 round at Valkenswaard. Darian has had a solid start to the season and currently sits fourth in the series.

We decided to sit down with Darian to discuss his discussion to contest the EMX250 championship and his season so far!

Gatedrop: Darian, good weekend for you, can you talk me through your moto’s in Germany?

Darian Sanayei:  Yeah, the weekend was pretty good. Qualified second in practice which set me up good for the motos. Moto 1 I got together with another rider down the start which put me in around 15th in the first turn. Then after I had some small issues which led me to not having the best ride possible and I ended up sixth. Moto 2 was a holeshot with Lawrence and Olsen just behind me. I led Lawrence for about 12 mins then he got around me and I finished second. I just wasn’t quite fast enough for the win this weekend, but I’m a work in progress! So 6-2 for 3rd overall.

Gatedrop: You have recently moved to France, how has it been adapting there?

Darian Sanayei: Yeah France is nice, some good sights. It’s an old country so it’s interesting to see some of the history here. Language barrier is tough, but I’m working around that (laughs).

Gatedrop: Your racing for the Bud Racing Monster Energy Kawasaki outfit, how have they helped you settle?

Darian Sanayei: The team is great they all are helping me adjust and working with me on getting better.

Gatedrop: This year was supposed to be your first year contesting AMA Supercross, how frustrating was it when you got injured?

Darian Sanayei: Injuries are always frustrating. I’m just happy I can still throw my legs over the bike and continue doing what I love. I will still have plenty of time to race sx.

Gatedrop: You had David Vuillemin helping you as a coach, how was that?

Darian Sanayei: DV was good, he helped me a lot on things and I felt like I was improving quite nicely coming into the sx season.

Gatedrop: You have rode a couple of GP tracks now, how do they compare to the tracks in USA?

Darian Sanayei: To me I would say the sand GP’s get a lot rougher. Just because it’s sand and the soft soil is constantly moving. On dirt and hard pack tracks I would say the roughness both in America and Europe are about the same as judging how big the bumps and ruts get. The only difference is the time. In USA you have all the moto’s put in from 8am to about 2pm just as rough but still traction. In MXGP you have all the moto’s from 7am to 6pm which makes it shape up and pack down a little differently. It makes the soil more hard and slick. This is all just my opinion, but what do I really know I’m still a rookie (laughs).

Gatedrop: You had a few options for the 2016 season, what made you decide go with your final decision off Supercross and EMX250?

Darian Sanayei: I thought it would be awesome to ride both in the states as well as Europe. I’m young and I would like to travel and experience as many things as possible while I have the chance.

Gatedrop: What are your thoughts on the GP paddock, do you see your future in this paddock?

Darian Sanayei: The GPs are very professional and I like that.

Gatedrop: You are racing EMX250, is the idea to learn the tracks and then racing the MX2 World Championship in 2017?

Darian Sanayei: It’s a bit early in the season still but yes that is what I’m planning.

Gatedrop: Will you race any MX2 World Championship races that dont’t collide with EMX250?

Darian Sanayei: I believe the only ones that don’t collide with my schedule are fly always. After my season is the two GPs in America and I would love to do those, but for right now it’s too early to say.

Gatedrop: Finally, are you surprised by Hunter Lawrence speed so far this year?

Darian Sanayei: He has been quick all season and this weekend he was really on it! It’s always hard to compare times from moto to moto but on hard pack the track isn’t changing quite as much, so I feel it’s a little easier to gage. MX2 went right after our moto on Sunday and the times top 3 in EMX were running fairly close with the top guys. For sure it’s a different story being in the race. For now I’m focused on my class. Improving and aiming for the top step on the podium.