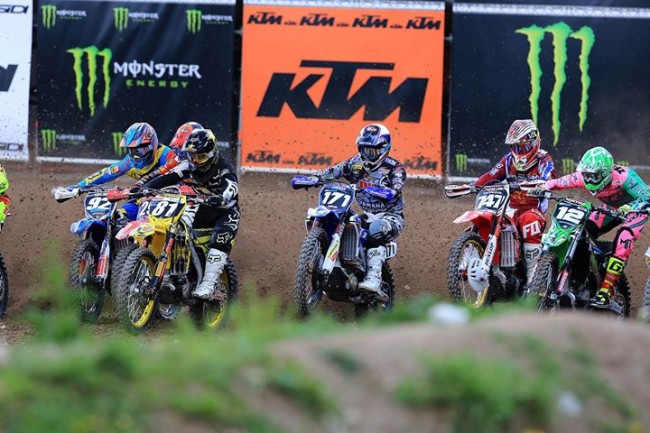 Damon Graulus has been around the GP and European scene for a while now and he is one of the main contenders for the EMX250 title. He was supposed to race MX2 this year but Kemea decided that EMX250 would be better for him.

Gatedrop caught up with the Belgian to get his thoughts on this and also how last weekend went for him on-board his Kemea Yamaha.

Gatedrop: How did the first 3 GP’s go for you?

Damon Graulus: Not so well to be honest, I had some problems in Qatar but Saturday was good. The first heat on Sunday I had a crash on the first lap and I hurt my ankle pretty bad but in the second race I tried to ride but with the pain it was difficult and unfortunately I had another big crash , I hurt my head and shoulder. Going into Thailand was not so easy, the Thailand GP was completely a mess and after that weekend the team decided I needed to ride EMX250, I am really disappointed about that.

Gatedrop: Are you putting a lot of pressure on yourself to be EMX250 champion to prove you belong in the MX2 class?

Damon Graulus: I am trying to do it in a positive way and not put too much pressure on myself because otherwise you will make mistakes and it won’t go good. For sure I want to be champion, win races and I will try my best. I will also do 3 GP’s were I hope to be in front of my team mates!

Gatedrop: The first three GP’s were all fly-away, what was it like visiting those countries?

Damon Graulus: Yea, Qatar was actually really nice to see but Thailand was not, I was really not a fan as it was too warm and the city Bangkok is not a nice place.

Gatedrop: Last year you rode MX2 for the full season before an injury, how do you feel the year went for you?

Damon Graulus: Overall I feel that it was not so bad, a couple of times I was in the top ten so yeah, that was good for me. Yeah, I made some mistakes during the season but I think that’s normal as it was my first year in MX2. In Finland I had this stupid strange crash which meant I dislocated my elbow. It took me a while to recover but I am back now and feeling healthy again.

Gatedrop: Last year Standing Construct where impressed with you so you signed a new deal to stay but when Julien Lieber became available they signed him. What’s your thoughts about that?

Damon Graulus: For sure that wasn’t a great feeling. It happened in Lommel and like you said, normally I stay with Standing Construct for 2015. They decided to put me out of the team so I needed to quickly find a new team. It was not easy but I came to an agreement with Kemea Yamaha, the first impression was okay so I took the opportunity. It’s nice it’s a Belgian team with lots of Belgian people!

Gatedrop: It must be pretty cool have someone like Marcniq Bervoets helping you?

Damon Graulus: Yeah, it’s okay, he’s a nice person. During winter we spent some time together so it should be good for the rest of the year.

Gatedrop: In Italy you had the speed but the races didn’t go so good for you..

Damon Graulus:  Last weekend was not what I wanted, I was fastest in both practice sessions. During the first heat I had a crash at the start and then another crash with another rider. My start in the second heat was a total disaster so it was a difficult weekend but this weekend is a new weekend, I will try my best!