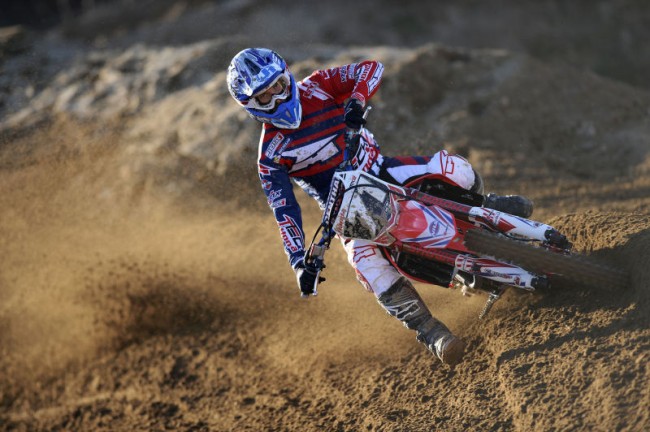 Up and coming MX2 star Damon Graulus narrowly missed out on the EMX250 title finishing second behind Honda-JTech rider Nick Kouwenberg. For 2016 the 21-year old Belgian will join Kouwenberg on CRF machinery, racing for Jtech in the MX2 World Championship. We caught up with Damon right before the proverbial storm breaks lose with more testing duties, pre-season races and all the hoopla that surrounds the new season!

A lot has changed for you in the last few months, right?

Damon Graulus: “Absolutely, but the transition to a new bike and team went really well. I’m very happy with how I adapted to the Honda. It’s been a bit of a surprise for myself honestly because normally it takes me a while to get used to the bike. Even for smaller changes like new handlebars or a different exhaust or what not. The CRF250R is a joy to ride with although I already knew this when I tested the bike before signing with Honda-JTech. We have some more stuff to try once we get into the new year. However we’re definitely on course and I feel good.”

For the first time in your career you moved to a team that’s not Belgian. That must have been a big step.

Graulus: “That’s how it seemed before, because of the language or the difference in culture… In the end everything just clicked very quickly with the team. I just spend four weeks with the team at their workshop near Parma and it’s been an excellent introduction. There’s a real family atmosphere at Jtech, where everyone works hard and in a professional way. They’re very friendly and doing everything to help me. Me and my mechanic Christian work well together so it already feels I have been part of the team for a longer time! It’s also cool to have some very good tracks- I mean tracks of a Grand Prix level- just in a range of two hours driving.”

You struggled at the start of last season but you ended strong, does that sort of sum your 2015?
Graulus: “Yes, kind of. My first races were indeed terrible, I only scored two points in the first two overseas GP’s. Way below my own expectations and those of the team. Things improved a lot towards the end of the year but in general the season was a bit average. Still I think it served a cause. Honestly, there’s so much that I have been able to take away from this year. Yes, mentally it has been tough especially when I moved back to the EMX250 series. I learned a lot from everything that happened in 2015 and I feel a lot stronger because of it. That’s something I will build on for the future.”

So far you have collected three important national MX2 titles –in France, Holland and Belgium- you won the most motos out of anyone in EMX250 thus year. The timing feels right to make another step forward.
Graulus: “National titles are of course nice to have, it adds shine to your CV so to speak. Yet, the international stage counts most of course and it’s been a shame that I just missed out on the EMX250 title but Nick (Kouwenberg) deserved it, he was the most consistent. Ultimately every rider wants to shine in GP’s and that’s my next goal.”

You picked a 5th place moto finish in the Mantova GP but you’re still coming in under the radar for your first full World Championship season. That might be an advantage.
Graulus: “That’s how I see it as well. So far I haven’t been doing too many GP’s so it’s hard for the outside world to have any kind of expectations of what I will do. Compared to riders who already showed their speed at this level I don’t have that pressure. I think I can surprise quite a few people in 2016. Nor the team, nor Honda put pressure on me but I want to show what I can do myself. I know I can ride a bike at the highest level. Now is my time to make my dream come true as a professional rider.”

Do you feel that it’s kept you back to finish school first?
Graulus: “Hard to tell. Luckily I’m not the only rider to finish school but a lot of guys quit to focus only on motocross! There’s good and bad about it. Before I used to be only able to ride my bike once a week, so being a professional helps a lot in that sense. However I’m glad I got my certificate. I’m self-employed, I have a degree in trade and I feel that helps me already now. I know about accounting, economy, sales…”