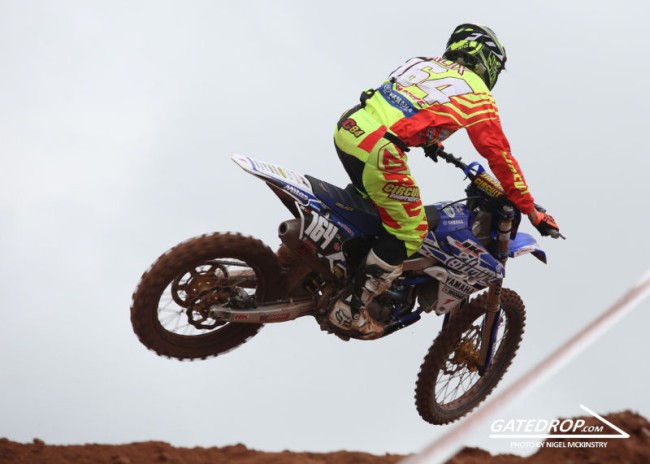 It was a surprise to see Dakota Alix compete the Spanish GP in the MX2 class. The I-Fly JK Yamaha Racing team needed a replacement rider for Alfie Smith who has a shoulder injury. They were able to get a deal done with Dakota Alix and so far he has competed the Spanish, French GP’s and the British Championship at Desertmartin.

So far, Dakota’s best result in the MX2 World Championship is a sixteenth place, coming straight in from Supercross and only a few days on a motcross track – that is impressive!

Unfortunately, at Desertmartin he had bike problems that held him back. However, we decided to catch up with him to discuss his move to the World Championship and what the future holds for the young American.

Gatedrop: We are here at round four of the British Championship, talk me through your day..

Dakota Alix: Unfortunately, today didn’t go too good. I started off the day in practice with bike problems, not too sure what was going on but anytime I got on the gas it would just blutter. Unfortunately, I didn’t really get to give it a good go today but the track was awesome and I’m pretty bummed I didn’t get too ride it. It was cool to take a couple of laps around it and I enjoyed myself.

Gatedrop: You have rode the last two MX2 GP’s with JK Racing, how did that deal come about?

Dakota Alix: Basically, it’s something that Colleen Millsaps told me about and it was a really last minute deal. I was going to do the Canadian Nationals up in Canada but I always wanted to see what the MXGP’s where all about so I took this deal really last minute. Now I’m here in Ireland so it all happened really fast.

Gatedrop:  The MX2 GP guys have been racing motocross since February and you’re coming into it straight from Supercross, how tough has that been?

Dakota Alix: Yeah, it’s been pretty tough. I came into Spain and had a sixteenth in moto two so all things considered I was pretty happy with that for only having three days on the bike and coming straight from Supercross.  All in all it’s just a big learning curve to ride a Yamaha instead of a KTM, they’re a lot different so hopefully I can make a little bit of progress this weekend and have a good result in Matterley Basin.

Gatedrop: You’ve rode tracks in Spain, France, England and Ireland. How do those tracks compare to the motocross tracks in USA?

Dakota Alix: Yeah there’s a big difference. Obviously in America it’s a one day race and at the GP’s it’s two days. In America the tracks are really deep and make them muddy for practice so they get bigger ruts. Most the American tracks that are on the circuit are like a millimetre. Over here I have already rode a sand track, a couple of hard pack tracks and the soils are a lot different compared to America. Basically everything in America is just loamy.

Gatedrop: Thomas Covington is racing MX2 and Darian Sanayei in EMX250, did you talk to those guys about GP’s before you made a decision to come and race?

Dakota Alix: No, I didn’t  talk to them about it but the other day I was talking to Thomas a little bit. He just said he’s based out of Holland and that there is plenty of cool sand tracks to ride over there. It’s cool to not be the only American over here and I’m sure he will have a good year here also.

Gatedrop: You’re racing for JK Yamaha, they’re an Italian team, how is that all going and is the language a barrier?

Dakota Alix: It’s not really a barrier but it is kind of tough not to be able to speak the same language as your mechanic and everything. Luckily the team manager, he speaks English so he can translate a little bit.

Gatedrop:  You’ve been in eight different countries in twenty-one days. Are you enjoying the travelling and seeing different parts of the world?

Dakota Alix: Yeah for sure, that was a big part of me coming over here, to see all these different countries. It’s been pretty awesome, I really like Ireland a lot and it was cool to go to France and Spain. I’ve got to see a lot of the UK so that is pretty awesome too.

Gatedrop: Do you know what you are doing for the rest of the season or is it still up in the air?

Dakota Alix: It’s still up in the air but we are just taking one day at a time and we will see where I end up.

Gatedrop: Matterley Basin is this weekend, it’s a pretty cool track, are you looking forward to that?

Dakota Alix:  Yeah, the track looks really awesome. I’ve heard a lot of good things about that track. I’ve never really seen any videos of it or anything but I am definitely going to study it this week. I am excited to have a race in England.

Gatedrop: If the opportunity comes would you be open to race the complete MX2 World Championship next year and also there is an u23 age rule, how many years would that give you in the class?

Dakota Alix:  Yeah, I am debating whether I want to stay or not next year. I do have two more full years not including this year, I would have the rest of this year and two more years to race in MX2 so if I ever want to do the GP’s now would be the time. It’s a tough to decision if I wanna stay or not but I’m weighing up all my decisions. I might end up staying, we will see.