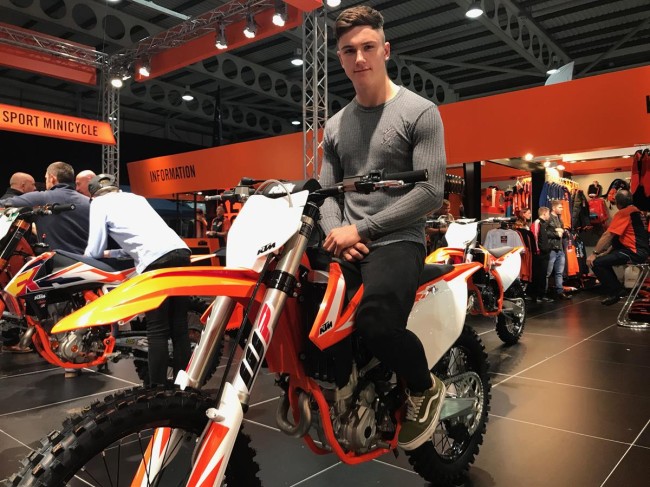 Conrad Mewse had an up and down debut season in MX2 in 2017 but by the end of the year he had things figured out and was a top five threat every weekend in the world championship.

The fast and talented former youth champion has moved back to the UK with Roger Magee’s Hitachi KTM UK team for 2018, but will still retain factory support direct from Austria in a bid to create the perfect environment for Conrad.

So far the off-season has been full of positive news regarding Conrad’s speed at the practice track and a couple of Instagram videos show the intensity Mewse is already riding at.

We decided it was time to catch up with Britain’s articulate teenage talent and get his thoughts on a roller coaster 2017 and take on the upcoming 2018 season that will see him back in the British championship as well as taking on the world back on a KTM.

Starting with the beginning of the season, the results weren’t what you wanted but I heard that during the week you were as quick as your teammates, was that frustrating that your results weren’t reflecting your practice speed?

Yeah practicing was always really good. The speed was always there, we had the speed to run top ten in GPs throughout the season. But like a lot of people are saying if your head isn’t in the right place and you aren’t enjoying yourself then it’s a waste of time turning up.

The first half of the season was a disaster for me. We didn’t get the results I wanted and we were just way off where my goal was. We slowly worked up to where we wanted to be and we started to get the results we wanted towards the ended of the season.  My head wasn’t in the right place in the first few rounds. It was my first full season in GPs, my first time doing the fly-away races and I just didn’t really gel to it very well. We learnt a lot from it and it’s very important we take that into next year and make sure that doesn’t happen again.

You were living in Belgium last year, with two fast teammates was it that or just not really being comfortable with everything?

I jut felt a bit uncomfortable and I was just wasn’t happy, it was a tough situation. I was living on my own and that was quite difficult. But now I am back in England and everyhthing is  track at the minute, everything is going great and hopefully we can have a solid start to next season.

You really showed your speed at the end of the year and at Assen I though you were maybe on your way to winning that moto until you went down, but that must have felt great to be catching the leaders?

Yeah I was feeling good the second half of the season and the pace I had at Assen was there at the start of the year, just my head wasn’t in the right place to give it. It was a shame really, because them boys had been doing that week-in, week-out, so they can do it for the whole moto. But that was new to me and I hadn’t ran that pace all year, so I got blown out pretty fast.

I also didn’t save myself over the weekend, I was top four or top three every single session. So it was a tough weekend (physically) but I gave it all I had and we learnt a lot. We know were we have to work in the off-season to be able to continue that pace all the way through. That is what we have done so far, we have taken the problems into account and fixed them ahead of next season.

Speaking to Roger Magee, he said your times have been really good from the minute you got on he KTM and looking at the Instagram videos it looks like you have a lot of intensity, so are you feeling really good on the bike?

Yeah, going back to KTM it felt like coming home for me. I gel with the bike so nicely and all of the success I have had has came on KTM. I’m so happy with where we are at, at the minute. The team are great, the guys are really friendly and I get on with everyone so well.

The bike is so good, I have got such a good group of people around me to allow me to do what we all know I am capable of doing next year. So it going to be very interesting for sure and hopefully I can shock a lot of people going to this new team and get some good results.

Hope everyone’s having a good weekend! Here’s a lap caught by @jamiedobb around @fatcatmotoparc yesterday……

From Shaun Simpson Roger has a history of creating a good environment and getting young riders to show their potential, and you have factory support as well so will that environment maybe suit you better?

To be honest, it will nice to go to a team that is a little bit quieter. Everyone is great, we all get along really well and it’s like one big family. The bike is still really strong, I am still getting factory support from KTM. It is exactly what I have always wanted to honest so I am really looking forward to seeing how it all plans out and seeing where we get to. Like Shaun proved, he has had some of his best result with this team in the past and obviously Ben has had some great results. The team is no slouch, you can do the job right on their bikes. I am happy with everything and I literally couldn’t ask for anything more, the team is really helpful. I am enjoying my riding so much, it is so much fun and I can’t wait to get started again.

Jamie Dobb is helping you, what sort of role is he playing this year?

Jamie has been great, I have been living at his house for two months now and have literally just came home for Christmas now. He is doing everything for me. He is organising my whole schedule and putting everything in place, to cooking me the right food and being the best manager out there.  He is doing everything possible and without him, Naomi his wife and his whole family it just wouldn’t be possible. They are such a great help and I couldn’t do it without them

He has been there and done it as a rider well, GPs, America, winning a world title, British title, so does all that riding experience help as well?

Yeah, it is great to have someone at the track who has been there and done it themselves, they know what it takes. Essentially you are putting an old head on young shoulders and you can’t ask for anything more than that and I hope I can repay him with great results.

You are racing the full British championship for the first time in 2018, is that another goal to win the British title?

Yeah definitely, I have never competed in a full Maxxis British championship in my life, so it is going to be great to return. Everyone knows how I get on in Matterley, I love to ride in my own country and see all the fans and hear them cheer me on with the air horns and the flags.

So it’s going to be great, I’m looking forward to coming back just to see everyone and hopefully I can put on a good show and give them something to go to the British championship and watch.

It’s a strong line-up, Great Britain has some amazing riders, it’s going to be very tough to get the title but that is our main goal, to get the championship.

And the world championship, I know Roger is quietly excited but what are your goals for that?

We don’t want to set our goals too high, we are planning it over a couple of years or few years of where our end goal is. I don’t really have a goal to be honest, all I’m doing is putting 110% into my riding and my training and if it means I finish 15th, I finish 15th. If I get inside the top five or top three then that is great.

I am pretty positive that when everything is on track that I can get top ten results so we will have to see and hopefully I can get a strong start to the season and put myself in good place to get a great result in the championship.

Hunter Lawrence showed the depth in MX2 by beat Zach Osborne at the MXoN last year, so just how crucial are the starts in that class? It seems when you get a start you can ride at the front?

The start is always important, there is anyone from 1 to 15 can win a race so it is very important but I have a good bike under me to get the starts I need and hopefully I can finish that with a great result.