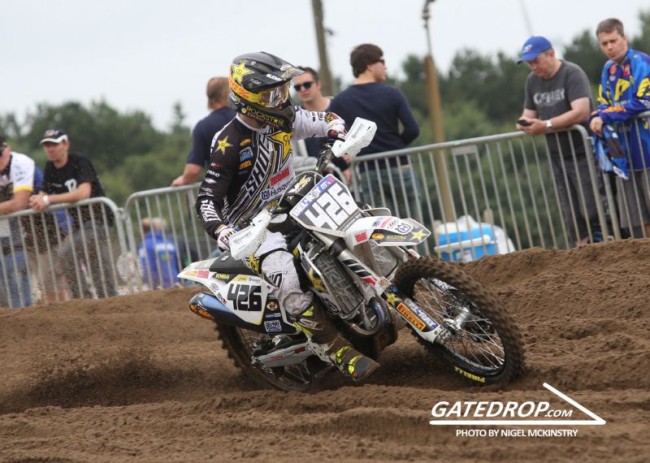 What a difference a year has made for Conrad Mewse! Last year he was competing in the EMX125 championship and his results were up and down. He signed a deal with Factory Husqvarna to race the EMX250 championship for 2016. He started the year off with a bang by winning Valkenswaard.

However, after Thomas Covington got injured the team decided to move up to the MX2 class. A lot of people seemed to think the move was too early for the young British rider. He did start slow but every GP he is learning and improving his speed with the best MX2 riders in the world.

With Jeffrey Herlings moving up to the MXGP class for 2017 as well as Max Anstie and Aleksandr Tonkov it leaves the MX2 class very open for next year. For the first time in a few years riders will be training to win and become World Champion. With a hard winter there are a number of riders that could surprise us and win GP’s in 2017. Conrad Mewse is a huge talent and definitely a rider to look out for next year.

We decided to catch up with Mewse after the GP of Lommel to talk about his season and hopes for the future.

Gatedrop: Conrad, can you talk me through your day here at Lommel?

Conrad Mewse: Yeah, it started not so bad with the qualifying race yesterday, I gated inside the top ten and then I made a mistake on the first lap which put me just outside the top twenty. I fought my way back to ninth so that was good, the speed was good. I have been here all week so I haven’t really been able to do much coming into this weekend, my strength was a little bit low but it is what it is. The first race today I didn’t get a very good start and I finished twelfth. In the second race, I was very tired before I went out but I wanted to take a good start and take it a bit easy on myself, which I did, I got the holeshot. I was battling for the lead in the first ten minutes but after that I was just dead, I had nothing left. I give it everything I had in those first ten minutes. The results weren’t great but at the end of the day we keep making progress and we are learning every single weekend, we keep fixing things we are doing wrong.

Gatedrop: Obviously, Covington got injured and the team decided to put you in MX2, how are you finding the MX2 class?

Conrad Mewse: I mean I’m definitely happy that I made the move to the MX2 class, I am learning it this year instead of the start of next year. It’s nice for Thomas (Covington) to be back now, he’s putting in some good races which is good. Also, Max (Anstie), congratulations to him, he had a very good race this weekend in Lommel. Like I said I never doubted moving up to MX2 and it is what it is, the team are working very hard to put me back up to the position I want to be in so I can’t thank them enough for that.

Gatedrop: Out of all the GP’s you have rode so far, what one has been the best for you?

Conrad Mewse: The best GP results wise was obviously Matterley Basin. I really enjoyed it there, I went into that race with a lot of confidence, I was feeling good. That was definitely a really good one for me. I have been putting a few top ten results in which is nice to see, it’s good to see some consistency. Hopefully we can finish the season strong with a couple more top ten’s.

Gatedrop: I’m glad you mentioned Matterley Basin, you were running with Herlings there at times, how did it feel to be running with one of the best riders in the world?

Conrad Mewse: Yeah, it was definitely great. It was like an idol becoming your competitor, I know he’s in a different world to everyone else but when your racing him around the track it’s a great confidence booster. I was just focusing on my riding that weekend, I didn’t really focus too much on who was in front of me and around me. It ended up being a good weekend, in the second race the rain came down and I had no googles but it is what it is and I was happy about that weekend.

Gatedrop: I believe your bike isn’t full factory like Anstie’s and Covington’s? If so how far off is it?

Conrad Mewse: I’ve never got to try their bikes so I wouldn’t know how far off it is. There’s a contract thing which means I’m only allowed a stock bike this year so it is what is it. It is quite difficult against the factory boys but it’s good for learning and I’m looking forward to getting on a factory bike.

Gatedrop: Considering you’re riding a stock bike you must be happy with the last few GP’s?

Conrad Mewse: Yeah, I mean I am but once you obviously get a fifth place result then you want to do that all the time. The team are still working on my bike and they make it as good as they can. It’s nowhere near factory but I am very thankful for what I get given. I am grateful I even got a ride this year due to my last two years so it’s good, I can’t thank them enough for what they do for me and taking me on-board. So far, it’s been a great season.

Gatedrop: For the 2017 season will you have the full factory Husqvarna?

Conrad Mewse: Yeah, for the 2017 season I should have the full factory equipment, yes.

Gatedrop: With Herlings moving up and another few fast guys moving up, are you hoping to put in a good winter and then who knows for 2017, a few podiums could be possible?

Conrad Mewse: We are just going to continue on from what we are doing now. I think it’s good enough for now, just need to get a bit stronger. It’s good, a lot of credit to my trainer, Joel Roelants, he puts a lot of time and effort into me and it’s been showing recently. A lot of the guys are moving up next year but I’m not going to put my expectations too high because it could go worse. I am looking forward to a good winter and hopefully get some podium finishes in 2017.

Gatedrop: Looking ahead in this season, will you do the rest of the GP’s including the USA rounds?

Conrad Mewse: No I won’t compete in the two USA ones which is a bit of a shame, I would have loved to have gone over there but I won’t be doing them as I only joined MX2 for half of the year and it would be a bit of a waste of money to send me over there. I have Switzerland and Assen left before competing in the full MX2 series next year.