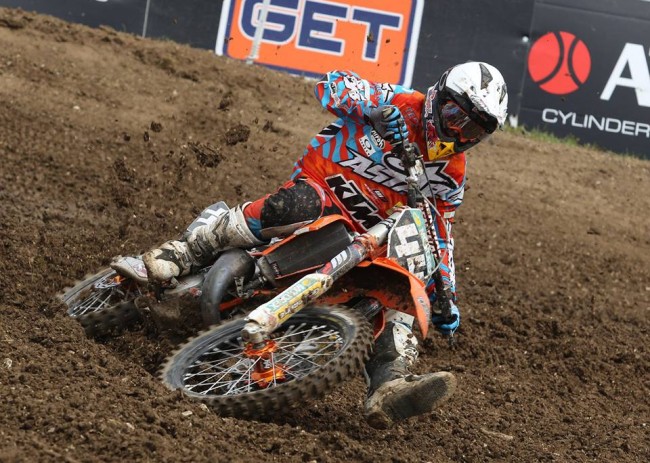 The EMX250 championship started in Valkenswaard and there was one surprise in store. Conrad Mewse shined this weekend on-board the Jacky Martens Husqvarna.

The weekend started well for him going the fastest in his group, then he won both the moto’s in fine form. It is his first season on-board the 250 machine but he looks to gel extremely well with the bike. He was the highlight of the day for British fans and after this impressive debut the future looks very bright for him.

We caught up with Conrad to get his thoughts on the weekend.

Gatedrop:  Conrad, perfect weekend for you going quickest in your group and then 1-1 in the moto’s. Talk me through your weekend..

Conrad Mewse:  Yeah, I mean we obviously started off with qualifying and I was really happy going number one in my group and giving me a good gate pick for the weekend.  The first race, I had a really good start, I pulled the holeshot.  From the first lap I laid the hammer down for five minutes but then I got a little bit tense. Obviously, I’m not really used to riding in that position for the last two years so I got a little bit tense, my lines changed and things like that. The gap kind of stayed the same and then I had two laps to go, the last lap he (Hunter Lawrence) closed me in but I was just riding save, I wasn’t going to go on the limit to crash and waste a victory. I brought it home and I was really happy with that.

In the second race I didn’t get as good of a jump but I came around the first turn in second. I charged to the front again, I passed the leader, I rode a couple of laps and then in the middle of the moto I completely lost my head. Again, I started riding different lines and stuff like that and then I looked back and seen Hunter there, I let him by and I had a rhythm so I wanted to follow him to see the lines he was using.  The plan was to make the charge at the end but then he crashed and on I went into second. I made the charge, passed the leader and brought it home to go 1-1.  I am really happy with that and can’t think my whole team enough for it.

Gatedrop:  Obviously being a rookie you didn’t have too much to go on coming into this weekend but what where your expectations for this race?

Conrad Mewse: I mean, my goal was to finish in the top five, that was my expectation really but I knew I had the speed for the top guys.  From 1 – 10 this class is so strong, the European class is getting stronger and stronger every year. It is a top class so, my goal was a top five but I am so happy to go 1-1, it kind of felt surreal a little bit.

Gatedrop:  You rode the British Championship last weekend and as well as going 2-2 you set the quickest times in the races. Did that give you confidence coming into this weekend?

Conrad Mewse:  Yeah, last weekend at Lyng I had a really good weekend and went 2-2, like you said I had the fastest lap times. It gave me a lot of confidence coming into this weekend. I found a really good rythem at Lyng and it was obviously nice to have a little bit of a race with the guy (Max Anstie) I train with all the time, it was good to see how things were going. It put me in a good place coming into this weekend and it showed.

Gatedrop: Do you plan on doing any more British Championship races?

Conrad Mewse:  I have to do the Dutch Championship so I think there are three more that don’t take place at the same weekend as the Dutch.  Every British Championship that I can do – I would like to do as it’s a great event. It’s good having the home crowd there and fans, I would like to go and put on a good performance for them.

Gatedrop:  A lot of 125 guys moving up to the 250’s can struggle for a season. What kind of feeling did you get when you rode the 250 for the first time?

Conrad Mewse: The two years on a 125 were just a disaster for me and I just really wanted to get on a 4 stroke.  I was always a smooth 4 stroke rider I think and it showed today on my debut race in Valkenswaard.  It pretty much showed that I am a 4 stroke rider, I like to be smooth. Especially around this track, it pays to be smooth and do things with the bumps – play around a little bit.

Gatedrop:  During the last two years in the EMX125 class you had the speed at times but seemed to struggle with consistency, are you worried about that for this year?

Conrad Mewse:  Yeah, last year the consistency wasn’t so bad but that was only down to the starts. If I didn’t get a good start then it was difficult to come back but if I did get a good start I would have won or finished in the top three. This year, I’m not really too worried about that. It’s my first year in the class and it’s a learning year for me but like you see here this weekend my bike is great out of the start.  To be honest I think it will continue to be like that for the rest of the season.  I don’t have any doubts about consistency, I’m just going to keep going round by round and try to get on the podium every weekend.

Gatedrop: Jacky Martens took up the opportunity to sign you for the 2016 season, what’s it like working with him?

Conrad Mewse:  Yeah, it is great. After the last two years people have lost a bit of belief in me. He believed in me, took me on, has put in a lot of time and effort into me throughout the winter in training and things like that.  He is a great guy, one of the best team managers out there. He is great to work with and always encouraged me if I was having a bad day.  I can’t thank him enough for everything he is doing for me.

Gatedrop:  You have been working with Justin Morris for many years now, it seems to be working really well!

Conrad Mewse:  Justin, I have worked with him for a long time. Now, it’s not so much the training side, he doesn’t train me so much. He is always there at the races to help me out with things when he can. He’s a friend, a really good friend to me and I have been with him for ages. He knows me better than anybody – he also plays a massive role in my riding.

Gatedrop: You have been riding sand for years, Hunter Lawrence has only been in Holland for three months. Are you surprised by his speed and are you worried about what he could do in hardpack?

Conrad Mewse:  He is obviously going to be a top contender but I think this weekend it was quite hard underneath. Although, you can’t take anything away from him, he is a great rider and he has come all the way from Australia.  He is very impressive, I have raced against him in the 85’s and 125 world championships.  He’s always been a good rider and he is going to be a top contender for this season.

Gatedrop: You are showing really good speed at the moment, does part of you wish you were racing the MX2 World Championship instead of EMX250?

Conrad Mewse:  No, I’m not going to get myself worked up about it. The main focus is the EMX250 class and that was the plan for the last year or two so I’m going to stick with that. I would be nice to get this championship under my belt but we’ll see how it goes, im not expecting anything. If there’s an odd GP the team would like me to do then I’d be more than happy to do it.