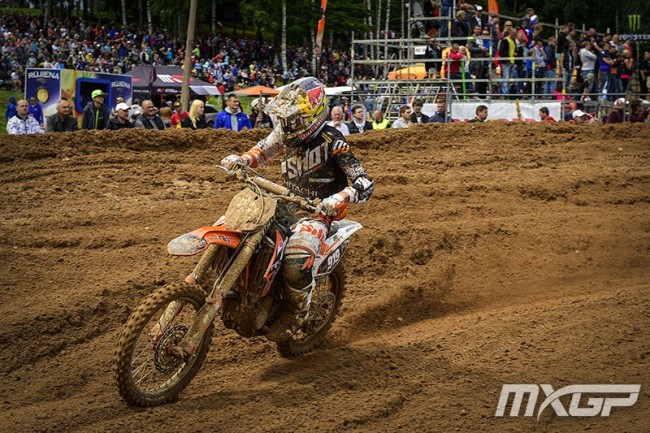 Last year we seen Ben Watson battling at the front of the EMX25O class and winning some moto’s in convincing style to finish a strong fifth overall. Hitachi REVO KTM UK decided to reward him with his impressive season by promoting him to the MX2 World championship for the 2015 season.

Ben is currently the youngest rider in the MX2 class, he started the season well in Qatar as he showed some impressive speed before a nasty crash. Since then Ben has been learning every weekend and it is helping him progress. Things are started to get better for him as he just landed a ninth overall in Latvia, this is really encouraging!

As Ben is learning every weekend and is the youngest in the class, he would be a great signing for any team for the 2016 season as he has a lot of potential. Gatedrop caught up with Ben to get his thoughts on his season and to discuss his brilliant ninth overall in Latvia.

Gatedrop: You showed great speed in Qatar, did you expect the season to start so well?

Ben Watson: I didn’t really know what to expect as it was the first race and I had only done one MX2 GP before. But I got a good start and ran up there for a few laps before a crash. But it definitely was a surprise to run in 3rd and I didn’t expect that.

Gatedrop: You have been going fast but haven’t been getting the results to reflect your speed, has it been frustrating?

Ben Watson: I don’t think I have been going fast really. Not how I should be anyway. At the moment it’s getting a lot better and I have just had my best result with a 9th overall. It was a little frustrating but you just have to take the positives.

Gatedrop: Has it been tough doing all the MX2 GP’s as well as the British?

Gatedrop: In the British, Kullas has been no were near you but just got a podium in Latvia, is that frustrating knowing you could possibly do the same on a factory bike?

Ben Watson: It’s very annoying actually. I know how good the factory Husqvarna is and how much of an advantage it gives. I guess it’s the same for any factory bike but also Kullas was riding very well and probably deserved a podium in Latvia.

Gatedrop: As you are now the only MX2 rider in the team, does that come with more pressure?

Ben Watson: No not at all, I don’t think of that, I just get on with my riding and try to get the results I know I can get.

Gatedrop: Have you been happy with how the British championship has been going for you?

Ben Watson: Not really. My only good round has been the first. I’ve had many bike problems and at some events just not riding how I should have been. But they have been slowly getting better.

Gatedrop: Last year you rode EMX250, just how much different is racing MX2?

Ben Watson: Not that much different, just the quality of riders is higher. The top runners are the best in the world. When you have a good race it is a really good feeling and makes you want more.

Gatedrop: You went really well in Latvia, how did it feel to get your first top ten overall?

Ben Watson: Yeah really good, it was a long time coming, I want to be there every weekend now. But it doesn’t happen overnight so I’ll keep working hard and if all goes well, I’ll get some more.

Gatedrop: Have you any plans for the 2016 season yet, any MX2 offers on the table?

Ben Watson: I’m not really sure what I’m doing yet, it’s still fairly early. I’m not certain what the team is doing yet so only time will tell.

Gatedrop: Being the youngest rider in MX2, you must feel you have plenty to offer the other teams?

Ben Watson: Yeah for sure, this year hasn’t been the best at all but every weekend it’s getting better. So I need to keep working and prove what I can do.

Gatedrop: Have you a mini goal you would like to achieve before the end of the season?

Ben Watson: Not really. I was setting a goal each weekend but I’m not now. I like to just keep my weekend simple and have nothing to concentrate on other than a good result. Since I’ve just concentrated on my speed and just getting a good start and showing I can run up there, it’s been going better.