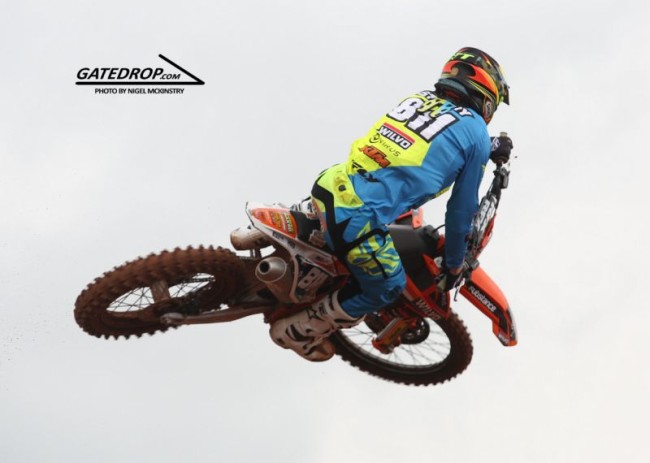 This is Adam’s rookie year in the MX2 World Championship but unfortunately he got injured at the first round in Qatar but he is now back and getting his way back to 100% fitness. He has put in some good results since coming back and his speed continues to improve.

We caught up with Adam after he took victory at Desertmartin to discuss his season so far on his STR KTM.

Gatedrop: Adam, perfect weekend for you going 1-1-1, you must be happy with how it went?

Adam Sterry: Yeah, I’m over the moon actually because it’s been quite tough recently with racing and getting injured, then having to get back into shape. It’s nice for it all to finally come together and get my first maxxis overall. It was a perfect day going 1-1-1 at one of my favourite tracks.

Gatedrop: Yeah, I know that Desertmartin is one of your favourite tracks, is it nice to be back?

Gatedrop: A few changes were made to the track this weekend, what did you think of the changes?

Adam Sterry: Yeah I loved the changes, the track was good before and the track is good now. I think the changes slowed it down a little bit so that was good. It got quite technical and rough so that was also good.

Gatedrop: You got in the lead and controlled it. It looked like you had loads more in the tank, was that the case?

Adam Sterry: Yeah, to be fair after the mistakes that I have been making in the GP’s lately I came here and once I took the lead I was riding a consistent race. I’m not going to say I wasn’t trying but it definitely wasn’t 100%, I had more in the tank. I was happy to have two consistent rides, two solid rides and get my first maxxis overall win.

Gatedrop:  This is your rookie year in MX2 but of course you got injured at the first round in Qatar, how frustrating was that?

Adam Sterry:  Yeah it was very frustrating. But, it was better for it to happen this way instead of getting injured half way or three quarters of the way into the season.  That way I wouldn’t be able to finish the season but as it happened I am able to get back racing and show everyone what I can do.  It wasn’t ideal but it’s just about making progress each week now. I had to do an off-season pretty much all over again. I turned up to Germany after having sat on the sofa for two months and as you could see I faded pretty bad but the speed is there.  I just need to put it all together now and hopefully I can get on the podium at a GP.

Gatedrop:  You’ve been back for a few GP’s now, are you happy with your speed and how everything is going?

Adam Sterry:  Yeah, I am really happy with my speed, it’s definitely getting faster and faster each week.  I need about a second or a second and a half to comfortably run up front with the top six. At the moment I am just off the top six and I’ve been a bit inconsistent with crashes and stuff but it’s the world championship and it’s definitely not easy. Hopefully I can put in a good result at Matterley Basin.

Gatedrop: Last year you rode the EMX250 championship, what’s the level like in MX2 compared to EMX250?

Adam Sterry:  To be honest, the depth throughout the EMX250 is probably better than MX2. Not faster but from first to fortieth the times are a lot closer. In MX2 it’s more the top twenty. But obviously the guys are the front in the GP’s are the fastest in the world, they’re unbelievably quick and that’s where I am trying to get too. I have three more years left in MX2 and a few top guys are moving out this year so hopefully next year I can regularly be around the podium.

Gatedrop: For the rest of this season what do you think you need to improve in order to be a consistent top ten rider?

Adam Sterry: Yeah, like I said each week I am still building, I’m not 100%, I am still getting back to 100%. I think that’s it really, once all the pieces of the puzzle come together and I ride like I know I can then I’ll be consistently in the top ten.

Gatedrop: For next year have you a deal to ride with STR or is it still up in the air for the 2017 season?

Adam Sterry: No, for the moment it’s still up in the air. My contract runs out with Steve so at the moment I don’t know what I’m doing. I need to get some results.