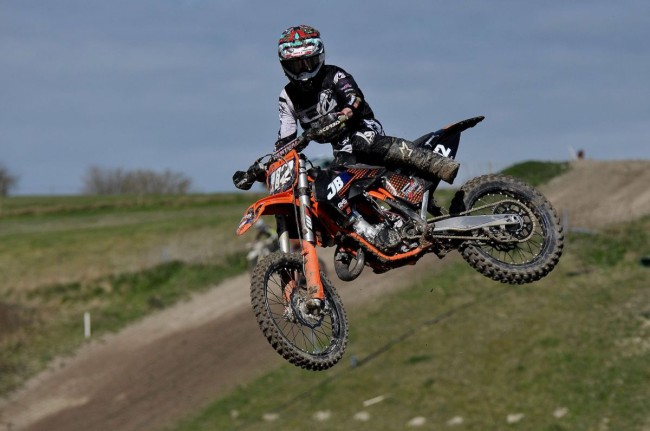 Conrad Mewse isn’t the only Brit that will be competing in the emx125 championship this year; Aaron Booker who is the brother of Jordan, will also do the series as he makes the step to the adult scene. He will also ride the mxy2 British championship on his JBR by AMS 125 KTM against the 250 machines.

Italy will be Aarons first European experience with another 94 riders doing the class, it will be a challenge but a good learning curve for the Brit.

Gatedrop caught up with Aaron to talk about his progress so far this season and what lies ahead.

Gatedrop: Instead of going straight from an 85 to a 250 you decided to ride a 125 this year, do you think this is a better move for you and do you enjoy riding the 125?

Aaron Booker: I think that it was the best move for me coming back from injury I just wasn’t strong enough to ride a 250 for 20 minutes. I also think the gap from an 85 to a 250 is massive and that the 125 is a good stepping stone instead of diving in too deep. I do enjoy riding the 125 a lot more now I’m used to it.

Gatedrop: Having a brother as fast as Jordan must be pretty cool, you must learn a lot from him?

Aaron Booker: I find it cool to have Jordan as a brother as he does help me as much as possible and he is always giving me pointers when we go riding and racing together.

Gatedrop: In January you decided to go to USA for a few months before the season, that must have been pretty cool and what tracks did you get to ride?

Aaron Booker: Yeah it was fun; we make the trip out every year during pre-season to get ready for the up and coming year. We rode all the main tracks in Cali like Pala, Glen Helen, Comp Edge, Milestone, Cahuilla Creek and we also went up to Zaca Station which was fun.

Gatedrop: Where there many pros out riding whilst you were there and did you learn much from them?

Aaron Booker: Well most of US pros were doing supercross practice when we were out there but the factory Suzuki boys from Europe were riding out there, as was Villopoto. They were all good to watch and try to learn a few things from. We also went riding with Dean Wilson at a rut track; that was good fun.

Gatedrop: Have you been happy with the first few mxy2 rounds?

Aaron Booker: My riding has been pretty good, I still feel like I’ve not shown my full potential yet. On the other hand the results have been up and down but I’m sure that I’ll get to where I want to be in time.

Gatedrop: Riding a 125 against the 250s must be hard but it means you have to keep pushing for a whole moto so its good preparation for the euros?

Aaron Booker: I am at a real disadvantage compare to the 250s but I think in the long run it will pay off. I do think that it will be good preparation for all the Brits doing the euros on the 125s.

Gatedrop: The mxy2 championship used to only get two moto’s each round but it’s now increased to three, that’s positive for young brits coming through?

Aaron Booker: I think the 3 moto format is a better step for the youths going into the pro groups but I think the shortened races wasn’t the best idea.

Gatedrop: Going into Italy have you got any expectations for the euro races?

Aaron Booker:  I am literally going there with no expectations at all. I get where I get, it’s all about learning for me.

Gatedrop: Italy is hard pack and pretty slick; do you prefer hard pack or sandy conditions?

Aaron Booker: I’m not a big fan of the sand so hopefully Italy will suit me my style quite well.

Gatedrop: Going back to the mxy2 championship, have you a goal of where you want to finish in the series?

Aaron Booker: Like I said with the euros, it’s the same with the mxy2, there are no expectations. I will do my best and that’s where I will finish. But at the same time I would like to be battling with the other guys on 125s in mxy2.

I would like to thank AMS KTM, Kenny Direct UK, BRP Imports, Nihilo Concepts, Scaffold By Design , SuperSprox, Vertex Pistons, GP Grafix, TWS GB, Colour Connect, Spy Optic UK, RustyPT and Ade Phelpstead for all their help they are giving me this season.