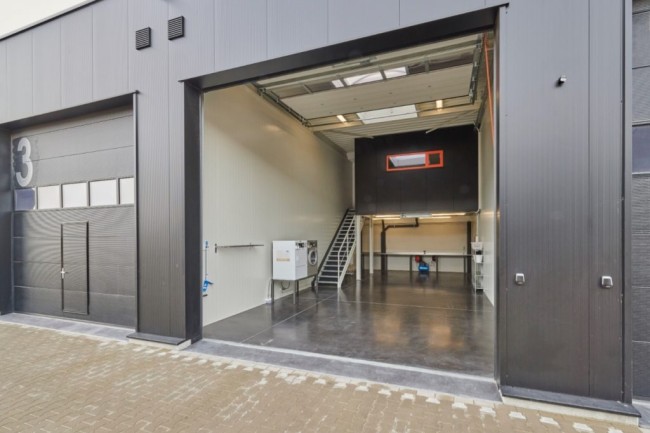 Limburg, more specifically Lommel, is the epicenter of the GP motocross. Many international teams have settled in and around Lommel over the years. Now there is also a solution for individual riders and smaller teams to find shelter in the neighborhood, the brand new MX Centre Lommel.

During the season many GP riders reside in the region. The reasons are obvious: the home base of the team, suppliers, suspension specialists and the availability of a training course nearby. However, not every rider has sufficient facilities to prepare himself. On the Heeserbergen you often see riders staying for weeks in their own motorhome. Somewhere on a quiet corner of the circuit, they only have the essentials, take care of their own electricity, and collecting water is done with a water bottle. Not ideal, because not every year the temperatures are as pleasant as in the winter of 2019. But was there an alternative?

Not until now! Bengt Vanvelthoven, son of ex-top rider Jaak, grew up in the midst of the motocross scene. He himself competed for a few years, and therefore really knows what it is about. Bengt also saw the often primitive circumstances in which some riders had to prepare their season here. Being an entrepreneur he immediately saw where the gap in the market.

Plans were made, questions were asked and in the end the result was there: a multifunctional building for motocross riders. With facilities to work on the machine and facilities to ‘live’ in ideal conditions in the workshop.

Bengt, introduce yourself to us!
Bengt Van Velthoven: “Hi, I’m Bengt Vanvelthoven. Born and raised in Lommel, the mecca of the motocross. I have a great passion for MX and help Claudio De Carli with his GP-team (KTM Cairoli-Prado) where I can. “

How do you get the idea to work out such a concept? Does that have to do with the story of Antonio Cairoli, who came here unexpectedly years ago?
Van Velthoven: Yes maybe. Cairoli arrived in 2004 with the De Carli team in Lommel. They moved in at our workshop. Shortly after that, I was increasingly asked by riders and teams if I could not offer a workshop with accommodation options. Both for short and long term. “

Just back to previous question. That story of Cairoli, can you explain that again?
Van Velthoven: “At the end of 2003 I was asked by the De Carli team if they could stay with me in the workshop in Lommel during the 2004 season. As I had enough space in the workshop, they came to Lommel at the beginning of 2004 and the then still young and unknown Antonio Cairoli was then a rider on the side of Claudio Federici. “

You undoubtedly saw opportunities in your project. But had this been preceded by research? Or have you gone off on your gut feeling?
Van Velthoven: “As I said, I was increasingly asked if I knew of a workplace with a place to sleep. Because my father (Jaak Vanvelthoven) is chairman of the Stedelijk motocross grounds in Lommel, I knew that many foreigners camped there all year round to prepare for the races. This sometimes happens in harsh conditions and they are often tinkering with their engines. The risk of theft (the engines are just behind in the camper at night) is quite large when they are just parked somewhere. That is why I believe in this project. “

Describe how the building is designed?
Van Velthoven: “Together with project developer Vanden Boer Concept (sponsor of De Carli Racing and Jorge Prado, and also part of this project) we have built a large industrial hall. This is divided into 6 identical units. There are also car parks with facilities for campers and trucks. Literally everything has been thought of, even at a release point for a chemical toilet!”

What does a unit look like? Key place, laundry room, garage, studio?
Van Velthoven: “Each unit is individually furnished and equipped with a large rolling gate, workbench, compressor, washing machine and dryer. You just have to pick up your toolbox and you can work in comfort. A small studio is provided above the workbenches. “

How many people can stay here and how long?
Van Velthoven: “There are 3 permanent berths per studio. We are not a hotel, therefore the minimum rent of a unit is 1 week. “

Is the studio Spartan or is there comfort?
Van Velthoven: The studio is equipped with every comfort. It is not very big but everything is new. Perfect for relaxing after a heavy training for mechanic and rider. There is sleeping accommodation for 3 people, a modern kitchen, nice bathroom with shower, toilet, flat screen TV, air conditioning, wifi, and so on. “

The building is now in use, but you wanted to wait until everything was in order in and around the building before you wanted to promote it publicly. But I understand that it has actually been in use for a while?
Van Velthoven: “Yes, the first driver was withdrawn mid January 2019. That was the Swiss MX2 driver Loris Freidig. Also Assomotor, the current team of Brent Van Doninck has been with us since mid-February. They both rent a unit for an entire year. “

It is obviously the intention that foreign drivers who come here. Has the word got around or how are you going to reach those riders?
Van Velthoven: “There are already several units full for the whole year. I did invent the project and forged the plans but I do not do this alone. Antonio Cairoli and Johan Boonen are also involved. These guys have many followers on social media and we reach a large part of the MX world. “

You are still very much interwoven in the current MX. You are more than an acquaintance for Antonio Cairoli, but also for world champion MX2 Jorge Prado. Is there a nice story behind that?
Van Velthoven: “Yes. As I said, I have helped Cairoli as a young guest in a foreign country with many daily things. So I know him before he achieved his great successes. We then became friends and have always remained. I also think it is because building a friendship with someone who is not yet known is easier than with someone who is already seen by everyone as a star. I’m still trying to help him where I can.