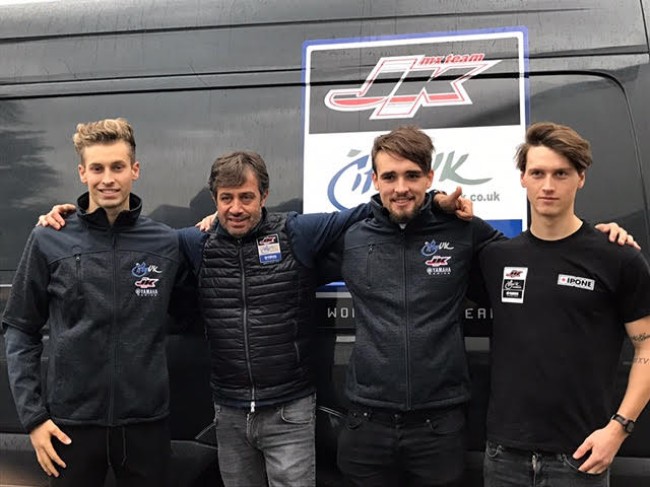 For 2017 the JK Yamaha team are delighted to introduce James Dunn in MX2, Ryan Houghton in MXGP, Ken Bengtsson in EMX250 and Maddy Brown in the WMX.

This year, the established I-Fly JK are once again aboard Yamaha bikes and working ever-more closely with Yamaha Europe.

As an Italian team, it is truly International with Ken from Sweden, Maddy from Australia and James and Ryan being young British racers.  All the riders will compete in their home championships along-side their aspirations at World Grand Prix level.

Preparation for our 2017 season has already begun and early riding testing on the fantastic circuits in Italy have provided great results already. The team is looking forward to their best season ever. Outdoor racing will begin at the end of January in the Italian championship, before the team head off to Indonesia and Qatar for their first two Grand Prix.

For the team right now there is no rest. The UK Indoor Arenacross series opens in Manchester in January when seasoned professional indoor racers Jay Wilson from Australia, Collin Jurin from the USA and young French “Lites” racer Yannis Irsuti.

I-Fly JK Yamaha Racing send out an open invitation to support us in 2017.  We have a full “supporters” package which includes ride days, GP hospitality, Arenacross VIP invitations, test days, International GP trips and exciting team events throughout the year.

We welcome you to join I-Fly JK Yamaha Racing team and become involved in the 2017 motocross season with our young, International team.

For more information please contact Dickie Dye on 0044(0)7896266206 or Dickie or Riccardo at JKRacingmx@hotmail.com.