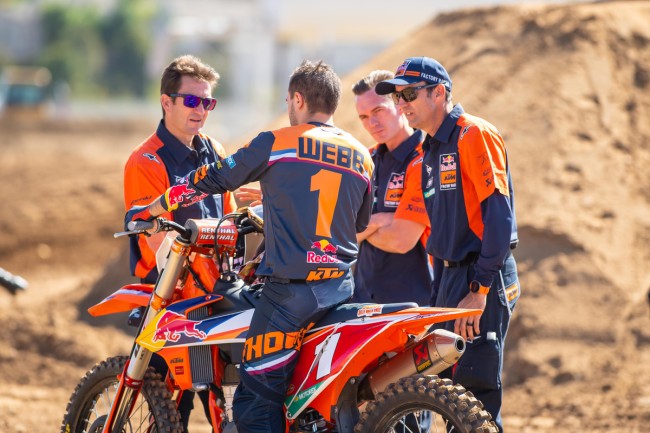 When it was announced that Marvin Musquin got injured prior this Supercross season it was expected that the Factory KTM team would draft in a fill in rider alongside Cooper Webb.

KTM have decided that they will fully focus on Cooper Webb for the upcoming SX season – that’s a lot of pressure on the reigning champ.

Team Manager of the Factory KTM team, Ian Harrison has explained why KTM made the decision and hasn’t ruled out signing a fill in rider but perhaps that’ll only happen if Webb’s results aren’t as expected.

“It is tough to make the decision but luckily it doesn’t fall on me. It falls on our sponsors so KTM and Red Bull ultimately. In the case of Marvin and when a rider is injured, we still pay them so it’s an added expense to add another rider to the roster. To find someone to fill in for the slot isn’t easy”, Harrison stated.

“We came to the decision that it would be better to put our focus on Cooper (Webb) and see how that goes at the beginning. It’s not to say that we won’t add anyone but for now we are going to put our energy into Cooper for the moment”, added Harrison.

With Webb having a fantastic Supercross season last year winning seven races which led him to the title, Harrison was also asked on what improvements they’ve tried to implement.

“When you win it’s always a little scary to change things because you’ve come to relying on what worked each week but we did try to finesse a few things. We tried to improve our bike in the whoops a little bit, we tried to get it a little better on the flat turns. We worked on it when Cooper recovered from his injured knee that he had at the second to last National. I think we’ve made progress but you never know. We are going to find out tomorrow night so we will see, these guys I’m sure have all done their homework. They’re all ready to go and it’s never easy so we’ll see where we fit in tomorrow”, Harrison stated.