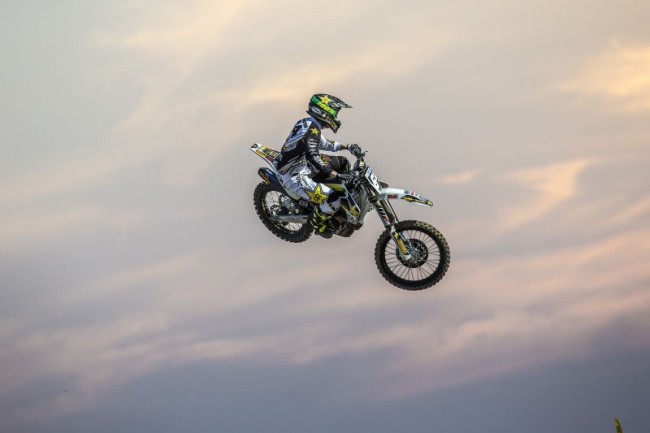 Battling his way to 12th and sixth in the two MXGP motos Max Nagl rounded out the Qatar event in 10th overall. Despite showing that he had the speed to battle for the podium Nagl struggled with his starts in both MXGP races. With the Losail track offering limited possibilities for passing the German started the first race in 10th place, dropping to 12th at the finish. A better start placed the German in eight position at the beginning of race two. Improving his speed as the race went on Nagl crossed the line in sixth.

Suffering a practise injury two weeks before the opening event of the 2016 MXGP series, Frenchman Christophe Charlier wasn’t able to give 100% during his competitive debut for Rockstar Energy Husqvarna Factory Racing. Spending limited time on his FC 450 before the GP of Qatar, Charlier rode to two 17th place finishes earning a handful of valuable points ahead of a long season.

Collecting promising results in his pre-season races, Britain’s Max Anstie arrived in Qatar looking to fight for the podium in MX2. Getting a great jump out of the gate in the opening MX2 race Anstie battled his way to sixth position before a mistake during the opening lap dropped him outside the top 20. Pushing hard to return to the front, Anstie worked his way to 10th at the chequered flag. The British rider made a positive start to the second race but a first lap fall resulted in a DNF.

Anstie’s Rockstar Energy Husqvarna Factory Racing MX2 teammate Thomas Covington made a promising start to his 2016 GP campaign running second in the Qualifying Race before a mechanical issue forced him to retire. Going wide to escape a first corner pile-up in the opening MX2 moto, the American found himself in 17th place. Hunting down the leading pack Covington crossed the line in 11th position. A bad start in the second moto gave Covington another mountain to climb. Fighting back from 18th position the American was running 10th before a crash on the final lap pushed him back to 15th. Covington placed 11th overall

The Rockstar Energy Husqvarna Factory Racing team will now compete in round two of the FIM Motocross World Championship in Thailand on March 05/06.

Max Nagl: “My speed and riding were good but it was a difficult first go for us. I’m glad we also managed to make significant improvements during the weekend. But I didn’t get the starts I was looking for in both races. The problem is there was only one fast line on this track, so getting a good start was very important. Most of the top guys were racing at a similar speed too, so it was very hard to make the passes. The results might not be what I expected but it was just one GP. I’m happy we got the season started. We’ve worked really hard in the off-season. We have a very competitive bike and I’m confident it’s going to get better and better as the season progresses.”

Christophe Charlier: “Two weeks ago I had a crash while training in Italy, which left me with a small injury. I was advised not to do the two first overseas GPs in Qatar and Thailand, but I decided to race. The goal was to collect as many points as possible and get some more seat time on my new FC 450. It was a difficult weekend here in Qatar but I’m already feeling a lot better. I’m hoping to be 100% ready to get the results I’ve set out to achieve when we return to Europe for round three of the MXGP series in Valkenswaard.”

Thomas Covington: “It was a tough weekend but I’m happy with my overall performance. We proved the speed is there for me to be among the top five in MX2. Luck wasn’t on our side in Friday’s Qualifying Race. I was running second but a small electrical issue with the bike didn’t let me capitalise on that great start. Not being able to finish qualifying I was forced to start both races on the outside. In the first moto I came from completely last back to 11th. I had a better start in race two but got together with some other riders and had to start from last again. I came back in 10th but as I was trying to make a pass on the last lap I ended up crashing. I’m feeling good on the FC 250 and the speed is there, so I’m looking forward to getting at it again in Thailand.”